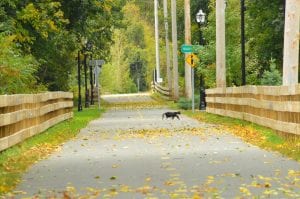 WESTFIELD- The Friends of the Columbia Greenway Rail Trail will be holding their third annual Glow Walk Wednesday at six p.m.

The event, which is free for all to attend, is meant to showcase the trail in a light it is not normally seen in.

“Most people are off the trail by dusk,” says Alice Flyte, Director of Membership for the Friends, “We thought it was something neat to do to get people on the trail at night.”

The walk will begin on the sidewalk near the East Silver Street access ramp and go south towards the dry bridge where everyone will then turn back, according to information from the group’s facebook page for the event.

The Friends try to have the Glow Walk during the full moon in October for better visibility. Attendees are encouraged to bring flashlights, bug spray, and Halloween costumes.

“When we’re on the trail we show people historic markers that were paid for by The Friends fundraisers,” says Flyte.

Attendance for the first two years of the Glow Walk has been between 60 and 70 people.

The temperature for Wednesday could be as low as 41 degrees with a small chance of rain and those participating are advised to dress accordingly.

The Columbia Greenway Rail trail currently extends from Southwick to Main Street in Westfield next to the Stop and Shop parking lot.

The City of Westfield is preparing for the final portion of the trail to be completed which would stretch from the current terminus at Main Street, north through the center of the city to the Westfield River. It is scheduled to be complete in 2021.

“The trail is unique because it is elevated above ground level, so pedestrians and bicyclists don’t have to worry about traffic,” says Flyte.