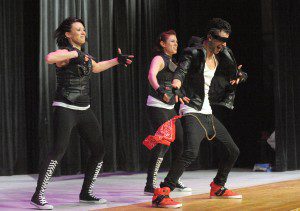 SOUTHWICK – With high-energy dance moves and a story to share, JLINE – AKA Jim Linehan – brought his anti-bullying message to Southwick-Tolland-Granville-Regional High School (STGRHS) yetserday afternoon.
The JLINE Dance Crew, which included singer/songwriter/choreographer Linehan and dancers Kathryn Lukes and Carrie Lee, performed for students and spoke about bullying.
A victim of relentless bullying himself, Linehan said growing up in upstate New York was difficult, at best.
“I was bullied every day,” he said. “It almost broke me.”
Instead of caving in, he looked within and found music.
“When I was feeling like no one understood me, I found music and it made me feel I was not alone,” Linehan said.
By his senior year of high school Linehan joined the drama club and starred in his school musical. He felt connected for the first time and later moved to New York City to pursue his dreams and talents.
Inspired by Michael and Janet Jackson, Linehan writes and performs primarily dance music that has a message and a beat. The video for JLINE’s latest single, “Ready, Set, Go” is currently in rotation on MTV.
Linehan wanted to spread his music and his anti-bullying message across the country and auditioned dancers to tour with him. The JLINE Dance Crew visits middle and high schools around the United States, performing original and cover songs combined with fast-paced dance and skits with Linehan’s words of encouragement of acceptance, tolerance and respect.
“I hope to inspire other people to look to a brighter day, stay strong and, most of all, accept each other. The response to the show has been incredible and exceeded my wildest expectations,” Linehan stated.
Both Lukes and Lee joined JLINE Dance Crew after responding to an audition. Lee has been dancing she was four-years-old and said she went to the audition not knowing exactly what it was about and was happy to know there was a message to the moves. Lukes agreed.
“It is really rewarding,” she said.
STGRHS English teacher Kristin Tetrault said a group of teachers helped bring JLINe to the school after winning a race.
“Last spring AIC (American International College) had a 5k race for education and we entered the team division and won,” said Tetrault.
The team consisted of Tetrault, Darrel Grant, Frank Rucki and John Matthews.
Their prize was $2,500 for their school. Tetrault earned an additional $100 by taking second place overall in the women’s division.
Once accepted by the School Committee, the money was placed the student activities fund, where a portion was used for the Freshmen Advisory and some was used for the JLINE Dance Crew performance.
Tetrault said the team is eager to run again and earn more money for students.
More information on the show and performers is available at JLINEmusic.com.