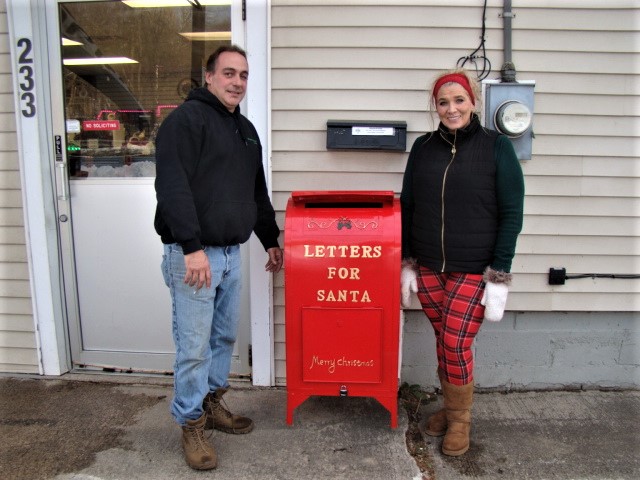 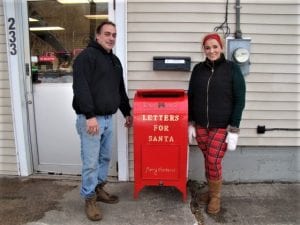 WESTFIELD – Mark and Laura Lee Arena of ASignature Fence Company are asking Westfield children to post their letters to Santa in their special Santa mailbox at 233 Union St.

The Arenas said that Santa’s elves have been working very hard this year making a surplus of toys, so he will be granting lots of wishes to those who leave a letter for him. Although Santa may not be able to answer all the letters, he will be answering a number of them, and many items on those letters will be gifted to the author.
Letters should be handwritten, addressed to Santa, and include the name and age of the child or teenager who wrote it. Mark Arena said he wants to encourage teenagers to write a letter, too. “They probably think they’re not included, but they are,” he said.
Parents should be sure to put their contact information on the letters so they can be notified, and arrangements may be made, if their child will be receiving a gift.
No stamp is needed, because Santa himself is going to come to ASignature Fence Company Dec. 23, from 3 to 6 p.m., to pick up the letters. Late letter writers may also hand deliver them to Santa that afternoon and join him for some hot chocolate and a candy cane, or just come and say hello if they already posted their letter.
The Arenas said they are looking forward to helping Santa to give out presents to kids in their community this year. This is the first time they’ve put out a Santa mailbox, and they are hoping to get a lot of letters.
“We really want to get the word out there, so we can help those families who need it,” said Laura Lee Arena.
Although this is a first-time effort, the Arenas are actively involved in the community, and provide a lot of sponsorships through ASignature Fence Company. Mark Arena said they have donated to St. Mary’s, have provided fencing around fields and daycares and donated an 8-foot extension fence to Bullen’s Field for the new Starfires Baseball team.
The Arenas have also been recognized with an Above & Beyond Certificate from Autism Connections, for providing them with a $6,000 fence on a $3,000 budget. They said they enjoy giving back to the community.
For the letters that children write to Santa, Mark Arena did have a tip. “Santa likes letters that begin with Dear Santa,” he said.