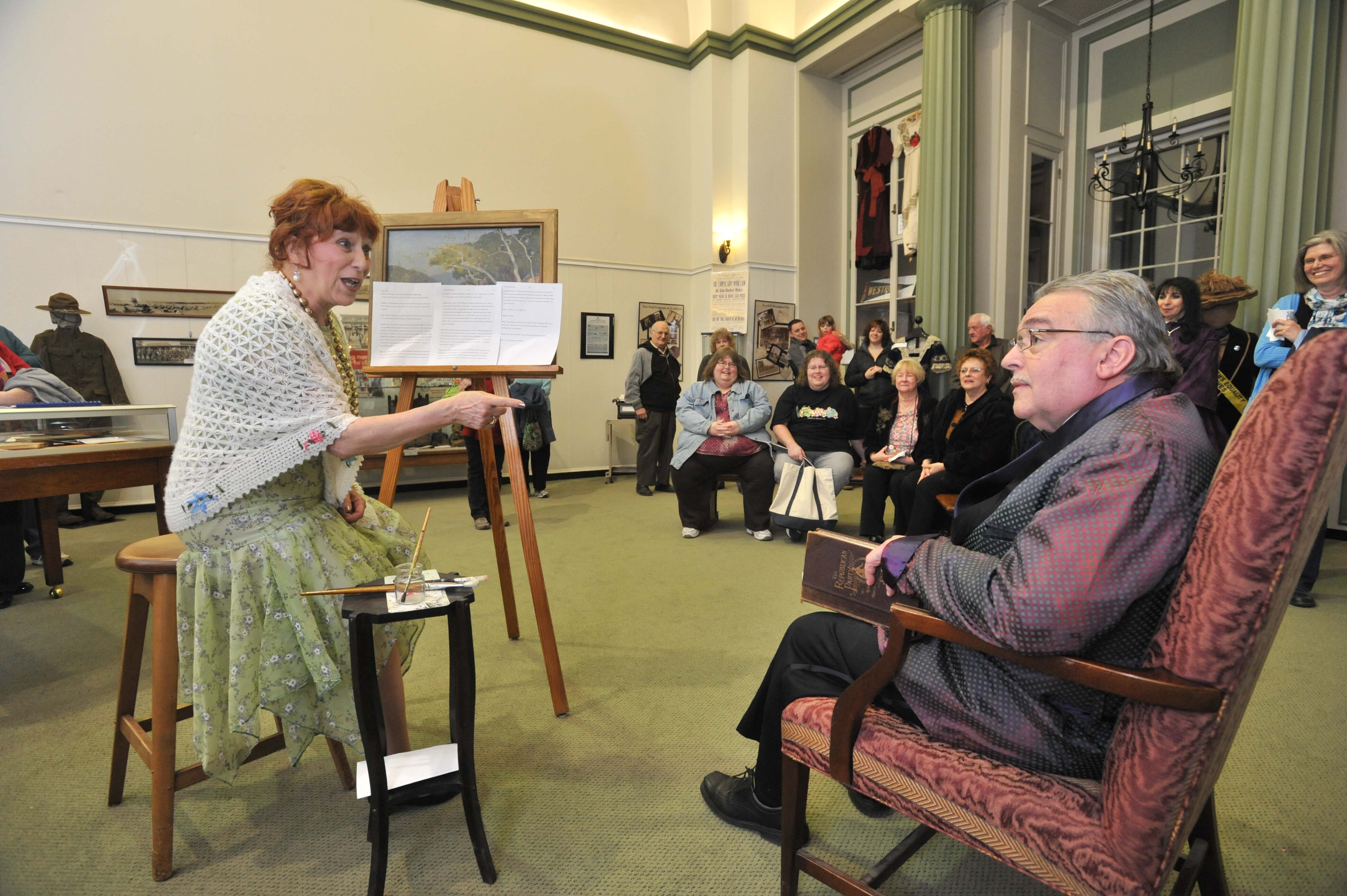 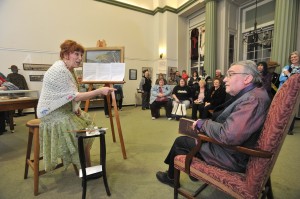 Carol and Rock Palmer of Westfield portray the parts of Florence Rand Lang and Henry Lang as they perform a skit at the Westfield Athenaeum’s 150th celebratory open house. (File Photo)

WESTFIELD-For 93 years, artists and artisans have showcased their works within the Jasper Rand Art Museum in the Westfield Athenaeum.

Blackburn noted there are still a few openings this year for artists or artisans to exhibit, however, the deadline to submit an application is April 1.

“Applications will be reviewed as received,” she said, adding there is a committee of artists and a staff member who make the final determination of all exhibitors.

Athenaeum librarians working with Blackburn recently uncovered some background history about the Rand family and the gallery’s early days.

“Florence Lang was responsible for the creation of the Jasper Rand Art Museum located in the Westfield Athenaeum,” said Blackburn, noting Florence Osgood Rand was born in Westfield in 1861.

“The Rand family lived at 53 Court St. in a house that had once been the Clapp Tavern on the corner of Elm and Court streets,” said Blackburn. “In 1873 the family moved to Montclair, N.J., and in 1906, Florence married Henry Lang, an importer who later became vice president of Ingersoll Rand.”

Florence Lang was considered a generous patron of the arts and donated an art museum and art department building to Scripps College in Claremont, Calif., and Rand Hall, a mechanical engineering building, to Cornell University, Ithaca, N.Y. Also, Lang donated the money to create the first art museum in New Jersey – the Montclair Art Museum, and in Nantucket, Mass., she turned a decommissioned railroad station into low rent apartments for artists.

Jasper Rand, Sr. was the proprietor of the Rand Whip Company on Elm Street which employed close to 70 people. Jasper Rand, Jr. and his brother Addison created the Rand Rock Drills Company in Newport, N.Y., which was at the forefront of drilling and mining equipment and compressors, which were used in major construction projects including the Panama Canal and excavating New York subways.

Blackburn noted that history shows that Lang’s gift “quickly catalyzed” other donors to contribute to the project which was dedicated in 1927.

During the local museum’s inaugural year, works that were featured included art by the city’s school children, oil paintings by Edith Clark Chadwick, wood block prints by Elizabeth Keith, and oils and bronzes from the Grand Central Art Gallery.

“In 1928 when Mrs. Lang heard that cost overruns left the Athenaeum $10,000 in debt, she quickly sent the money to clear it,” said Blackburn, noting library officials named the auditorium after her, the Lang Audience Room (currently known as the Lang Auditorium). “Today the Jasper Rand Art Museum and the Lang Auditorium stand on the site of the former Clapp Tavern.”

Blackburn said the purpose of the exhibition space is to present shows in all media that serves to stimulate the appreciation and understanding of art in the greater Westfield community.

Over the years, a wide variety of works have been showcased, ranging from 11 large oil paintings from the Museum of Fine Arts in Boston by distinguished American artists in 1933, to a 1940 exhibition on the “important work” of the Hampden County Tuberculosis and Public Health Association.

In 1948, a unique show included textile machinery from the Foster Machine Company, bicycles from the Westfield Manufacturing Company, and boilers from the H. B. Smith Company, and in 1953, a collection of original wash and color drawings by the late Helen Hokinson, a New Yorker cartoonist famous for her middle aged club women, was showcased.

Throughout the years, the gallery walls have been graced with art work from city school children, as well as in 1964, citizens were given an opportunity to inspect the city’s Master Plan, displayed by the Westfield Planning Board.

“The Jasper Rand is a beautiful space to exhibit,” said Blackburn, adding, “it is open to the public many hours a week.”

This month, Roger Duffy has a show titled “Just Ink.”

“Art has many forms, from abstract to surreal, impressionism to realism,” said Duffy in a statement. “Many want to convey what they feel or what they see, or even what they think. I try to depict the grandeur of the world we live in, because in this modern day the world seems smaller and we seem greater by our technology that is right in hand. We seldom step back and see the vastness of our created world and the awe of what is before us every day.”

For more information on exhibiting work or details on upcoming shows, visit www.westath.org or call (413) 568-7833.