Bond… The Name is Bond
The Springfield Symphony Orchestra celebrates the music made famous by the James Bond 007 movies in “Bond & Beyond” on Saturday, March 1 at Springfield Symphony Hall. Michael Krajewski is guest conductor on a program that includes classic Bond music from “Goldfinger”, “From Russia with Love”, “Diamonds are Forever” and other thriller scores from “Mission Impossible”, and “The Pink Panther”.
Broadway’s Debbie Gravitte is the soloist. She and Jason Alexander were break-out stars in the award-winning musical “Jerome Robbin’s Broadway”. Gravitte nabbed the Tony Award for her performance singing Irving Berlin’s “Mr. Monotony”. Her other Broadway credits include “They’re Playing Our Song”, “Zorba” and “Ain’t Broadway Grand”. In the biopic of Jacqueline Susann, “Isn’t She Great”, which starred Bette Midler and Nathan Lane, Gravitte played the late singer Eydie Gorme. Recently, Gravitte made her debut with the New York City Ballet, singing in “Peter Martins’ “Thou Swell” at Lincoln Center.
Tickets: 413-733-2291 or www.springfieldsymphony.org. 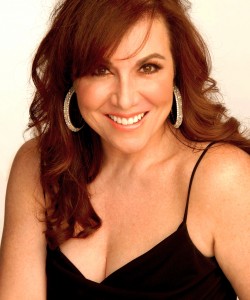 Experience “The Music and Dance of Uganda” at UMASS
The UMass Fine Arts Center hosts Empower African Children’s “Spirit of Uganda”, an evening of theatrical song and dance, from traditional to contemporary, representing the culture of Uganda and East Africa. Staged by Peter Kasule, 22 performers ages 10-20 take the stage with the melodic tones of standing drums, with dramatic choreography, bright, layered rhythms, and call-and-response vocals. Part of a North American tour, “Spirit of Uganda” performs in Amherst for one performance on Wednesday, March 5.
Director Kasule explains that the music and dances have significance beyond the obvious themes. 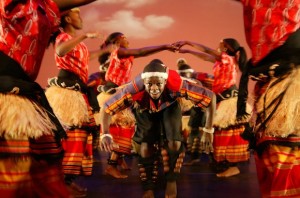 The Spirit of Uganda

“For those of us who have lost our parents, our elders and neighbors, who witness the daily struggle to carry on, these rhythms and patterns are a comfort, they are our teachers and tools of survival,” Kasule writes. “Music and dance in Uganda today are fluid and dynamic – a shifting mix of traditional and new forms that celebrate the country’s rich and multiple heritages and embody the connections among peoples and across borders.”
The performance will include a wide range of styles, from a capella duets to raucously drummed dance numbers including the entire company. While drumming and vocals are the focus of the music, traditional instruments like embaire, a large long xylophone, and omukuri, a flute most often used to herd cattle, are also used to enhance the arrangements.
Tickets: 413-545-2511 or 800-999-UMASS. or www.fineartscenter.com 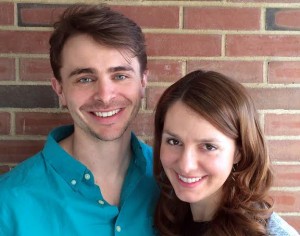 James Jelkin (Benedick) and Sarah Wintermeyer (Beatrice) star in
Connecticut Repertory Theatre’s “Much Ado About Nothing” through March 9 at
the Nafe Katter Theatre in Storrs, CT. (Photo by Matt Pugliese)

Keep in Mind…
***The Connecticut Repertory Theatre brings Shakespeare’s comedy “Much Ado About Nothing” to the Nate Katter Theatre, at University of Connecticut in Storrs, February 28-March 9. Paul Mullins stages this battle of the sexes, wits and romance during the post-Korean War 1950s, where Sinatra tunes are on the radio, soldiers are returning home, and Beatrice (Sarah Wintermeyer) and Benedick (James Jelkin) trade barbs in a Newport mansion. Tickets: 860-486-2113 or www.crt.uconn.edu
***The Book of Mormon plays The Bushnell in Hartford on March 18-30. The multi-award winner by the South Park guys is still Broadway’s big blockbuster, and the tour sells out wherever it plays. It’s bold, outrageous, and potty-mouthed (definitely not for kids), but it’s also a terrific Valentine to the great Broadway musicals. Tickets: 860-987-5900 or www.bushnell.org.
***Vickie Phillips, the Springfield-based singer and cabaret artist, is one of the winners of the 2014 Bistro Awards, which honor outstanding achievements in the cabaret industry. Phillips, who appears regularly at Don’t Tell Mama and the Metropolitan Room in New York, is being honored for “Song Interpertation”. Also being honored is Ben Vereen and Anita Gillette. The awards ceremony is March 4 at the Gotham Comedy Club.
Mark G. Auerbach studied theatre at American University and the Yale School of Drama. He’s worked for arts organizations and reported on theatre for newspapers and radio.