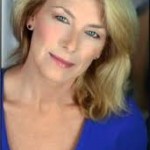 Leslie Hendrix from “Law & Order” is Masha in “Vanya and Sonia and Marsha and Spike” at Hartford Stage.

Christopher Durang, the comedic playwright, sets “Vanya and Sonia and Masha and Spike” in a country house in Bucks County, inhabited by siblings Vanya and Sonia, who have lived there in Chekovian moods, since their parents died. Enter their self-absorbed movie star sibling Masha (Hendrix) with her twenty-something boy-toy Spike, and a family reunion turns into a hilarious (for the audience) melt-down. Christopher Durang’s plays include “Sister Mary Ignatius Explains It All For You”, “Beyond Therapy”, “A History of the American Film”, “The Marriage of Bette and Boo” and “For Whom The Southern Belle Tolls”, his silly parody of Tennessee Williams’ “The Glass Menagerie. Durang, a Yale Drama School graduate, often teamed up with classmate Sigourney Weaver at The Yale Cabaret to perform parodies like “Das Lusitania Songspiel”. Durang has numeroous credits as an actor; he’s currently appearing in a production of “Vanya and Sonia and Masha and Spike”. 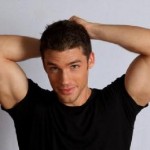 David Gregory from “One Life to Live” is Spike in “Vanya and Sonia and Marsha and Spike” at Hartford Stage.

For tickets: 860-527-5151 or www.hartfordstage.org Note: A different production of “Vanya and Sonia and Masha and Spike” will take the stage of Shakespeare and Company in the Berkshires later this summer. The Other Place Sharr White’s “The Other Place”, a taut drama seen on Broadway last season, and more recently at TheaterWorks in Hartford, gets a Berkshires premiere as 20th season opener of The Barrington Stage (May 21-June 14). Emmy Award-winner and Golden Globe nominee Marg Helgenberger stars as a successful neuorologist, Juliana, whose life seems to be coming unhinged. Her husband has filed for divorce, her daughter has eloped with a much older man, and her own health is in jeopardy. But in this brilliantly crafted work, nothing is as it seems. Piece by piece, a mystery unfolds as fact blurs with fiction, past collides with present, and the elusive truth about Juliana boils to the surface. 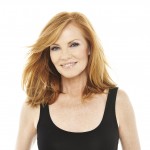 Marg Helgenberger from “CSI” stars in “The Other Place” at Brrington Stage.

Currently featured in the new CBS TV series, Intelligence, Marg Helgenberger is best known for her role as Catherine Willows in CSI: Crime Scene Investigation. She won an Emmy for her break-out role of K.C., a hard-bitten prostitute who catered to Vietnam War soldiers, in the series China Beach. She also was George Clooney’s love interest in a multi-episode arc of the TV series ER. Sharr White is an up-and-coming American playwright, whose play “The Snow Geese” premiered on Broadway last season with Mary Louise Parker starring. “The Other Place” had a Broadway run last season; his other comedy, “Annapurna”, is headed to Chester Theatre Company this summer. For tickets: 413-236-8888 or visit www.barringtonstageco.org. 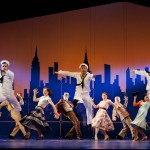 Clyde Alves, Tony Yazbeck, Jay Armstrong Johnson and the Ensemble of “On the Town” at Barrington Stage last summer.

Newsworthy ***The Barrington Stage Company production of “On The Town” is Broadway-bound. TheLeonard Bernstein/Betty Comden/Adolph Green/Jerome Robbins musical about three sailors on 24-hour leave in New York City will begin previews on September 20. John Rando and Joshua Bergasse, who staged and choreographed the Pittsfield production, will handle the same chores in The Big Apple. Hopefully, the Barrington Stage cast will head to Broadway as well. http://www.onthetownbroadway.com/ ***The Hartford Symphony Orchestra received a grant from the National Endowment for the Arts to support Musicians Care Project, a community engagement initiative to enhance the quality of life for people of all ages whose healthcare needs prevent them from taking part in traditional music performances by providing live, interactive musical experiences. Piloting the program at Hebrew Health Care in West Hartford, Hartford Symphony Orchestra chamber ensembles performed concerts for the residents, including performances on specific units of the facility. Mark G. Auerbach studied theatre at American University and the Yale School of Drama. He’s worked for arts organizations and reported on theatre for newspapers and radio.