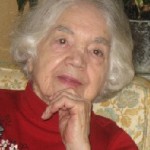 WESTFIELD – Lieta M. Marrotte, 100, a longtime resident of Westfield, MA, passed away on May 15, 2014. Born in Trenton, NJ on August 31, 1913 to Natale and Eudosia Marchesi, she graduated from Princeton High School and Wilson College.
She was active in the Westfield community for almost thirty years as a volunteer and as a member of local organizations. Lieta was a past president of the Westfield Women’s Club, participated in the Garden Club, Westfield Athenaeum Book Club, and was a member of the Hopefully Well-Affected Club. She was a member of the First United Methodist Church. Lieta was an active supporter of the American Red Cross, who she served in Europe during World War Two. She continued to support the Red Cross the rest of her life.
She was the widow of Paul A. Marrotte who died in 1999. She leaves her son, Sandy Marrotte of Plymouth, NH; four grandchildren and two great-grandchildren. She is predeceased by her daughter, Andrea Parks.
Calling Hours will be held from 5:00 p.m. to 7:00 p.m. on Wednesday, May 21st at the Firtion-Adams Funeral Home, 76 Broad Street, Westfield, MA. A memorial service will be held Thursday, May 22nd at 1:00 p.m. at the First United Methodist Church, Court St and Holland Ave, Westfield, MA.
In lieu of flowers, donations may be made to the American Red Cross, Greater Westfield Chapter, P.O. Box 1324 Westfield, MA 01086.
www.firtionadams.com