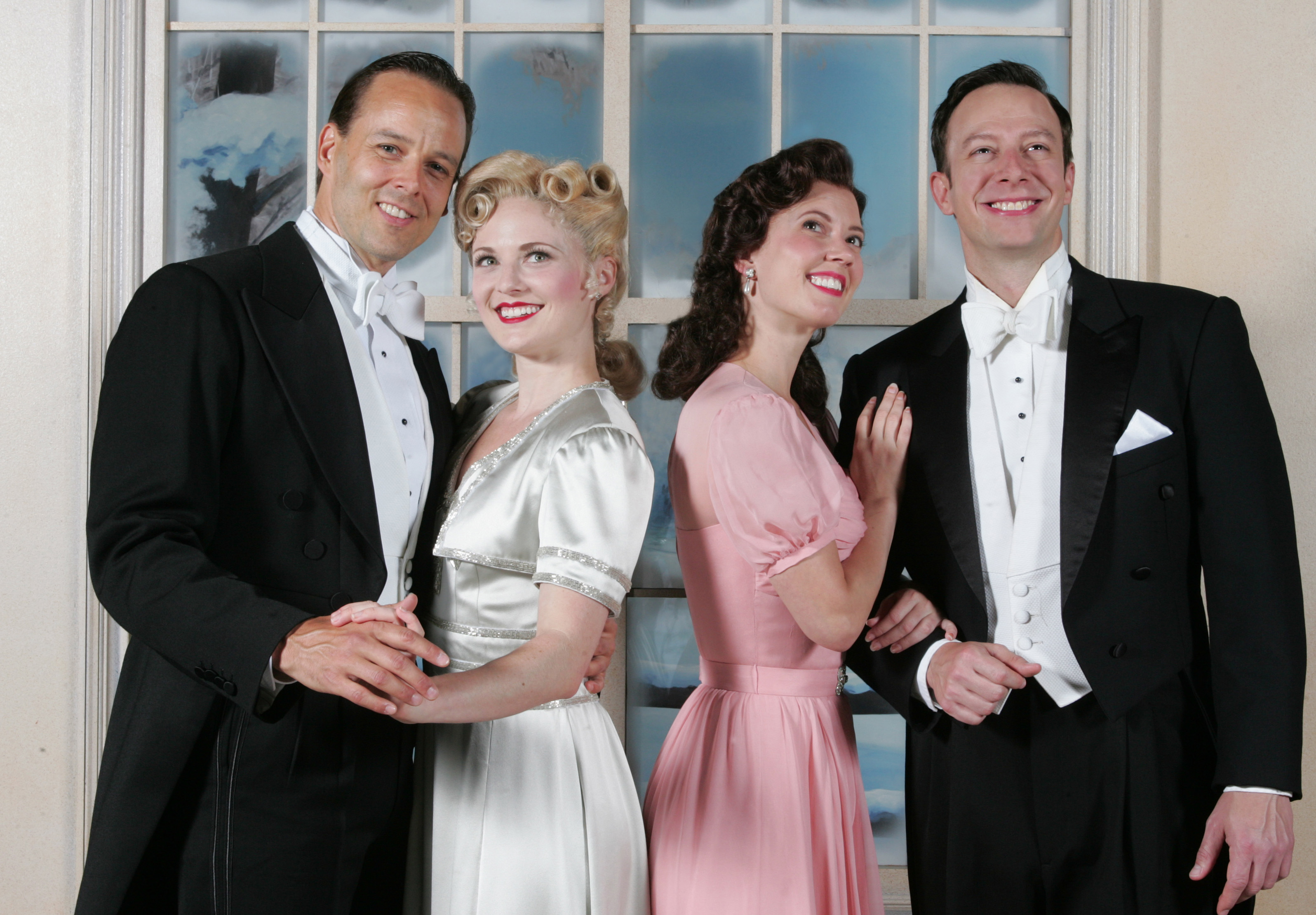 Irving Berlin’s Holiday Inn
If there’s any movie musical that cries out for a stage production, it’s Irving Berlin’s 1942 Bing Crosby and Fred Astaire musical “Holiday Inn”, directed by Mark Sandrich. It featured the now classic “White Christmas” along with other Berlin hits like “Easter Parade”. and “Be Careful, It’s My Heart”.
Goodspeed Musicals closes its very satisfying 2014 season to date with the world premiere of “Irving Berlin’s Holiday Inn”, a stage version of the movie hit (through December 7). Goodspeed is known for sending musicals to Broadway. “Man of La Mancha”, “Annie” and “Shenandoah” got their start on the Connecticut River in East Haddam. “Irving Berlin’s Holiday Inn” could be the next Goodspeed-to-Broadway export. It also commemorates a Goodspeed milestone. It’s the swan song for Michael Price, who has led Goodspeed for decades.
Gordon Greenberg and Chad Hodge have adapted the movie musical, using Ivring Berlin’s songs. For those who haven’t seen the movie, some showbiz types turn a Connecticut farmhouse into a jubilant nightspot…but only on holidays. Greenberg also directs, and Denis Jones choreographs.
Heading the cast is acclaimed Broadway dancer Noah Racey, who starred in Goodspeed’s production of “Where’s Charley?”, singing and dancing the part made famous by Ray Bolger, and stopping the show with “Once in Love With Amy”. His Broadway credits include “Curtains” with David Hyde Pierce, “Never Gonna Dance”, and “Thoroughly Modern Millie”. Also cast is Patti Murin, direct from Broadway’s “Lysistrata Jones” and “Xanadu”.
For tickets: 860-873-8668 or www.goodspeed.org
Evita
The Andrew Lloyd Webber and Tim Rice blockbuster, “Evita”, opens The Bushnell’s Broadway season (September 23-28). It’s a stunning portrait (somewhat fictionalized) of Eva Duarte, an “actress” who used the casting couch to work her way into the role of Argentina’s first lady. Always true to her roots, she never forgot the people in her humble beginnings, yet she died young and became an icon.
Tim Rice got the idea for “Evita” while listening to a radio program about Eva Peron’s remarkable, yet short life. It began life as a concept album in 1976, and Harold Prince turned it into a stunning Broadway musical (1979), which put Patti LuPone and Mandy Patinkin on the map. A revival was a hit of the 2012 Broadway season with Ricky Martin as Che. Caroline Bowman plays Eva in Hartford. Many people only know the film version of “Evita” which starred Madonna. The stage version is operatic in scope, almost completely sung-through, and quite visionary for its time.
Michael Grandage, formerly with London’s Donmar Warehouse staged the recent Broadway revival, and his work is recreated for the tour by Seth Sklar-Heyn. Rob Ashford choreogeaphed the revival, and Chris Bailey recreates it for The Bushnell.
On a personal note, I’ve always liked “Evita”. When I was living in New York, as the musical was wrapping up its long New York run. I used to sneak in after intermission on occasion to catch the signature “Don’t Cry For Me, Argentina”, and the following “High Flying Adored”. Although I saw a number of Evitas, from LuPone to Loni Ackerman, my favorite was Florence Lacey. She now lives outside Hartford.
For tickets: (860) 987-5900 or www.bushnell.org.
Plan Ahead
Play! in CT Fall Theatre Festival, a first ever partnership of six Connecticut regional theatres, offers some great plays, musicals, conferences, talks, and special events from October 23-26. Discounts abound, along with some overnight packages, restaurant deals, and other incentives. For details: http://www.playinct.org/
Keep in Mind…
***Private Eyes, Steven Dietz’s very funny romantic thriller plays Shakespeare and Company in Lenox through November 9. Jonathan Croy directs the story of married actors Matthew and Lisa, after Matthew discovers that Lisa may be having an affiar with her director… or are they rehearsing a play about a married actress having an affair with her director? For tickets: 413-637-3353 or www.shakespeare.org.
***The Springfield Symphony Orchestra’s season opener, with Kevin Rhodes conducting, showcases the members of the Orchestra in three highly vivid works, Ravel’s “Bolero”, Debussy’s “La Mer”, and Mussorgsky’s “Pictures at an Exhibition”. It’s nice to see a music program that highlights the ensemble without guest artists. For tickets: 413-733-2291 or www.springfieldsymphony.org
***10,000 Maniacs, one of rock’s most critically acclaimed bands and one of the primary architects of the college rock sound, plays the Colonial Theatre in Pittsfield for one night only, Saturday, September 27. It’s part of the Berkshire Theatre Group’s fall offerings. For tickets: 413-997-4444 or www.berkshiretheatregroup.org.
Mark G. Auerbach studied theatre at American University and the Yale School of Drama. He’s worked for arts organizations and reported on theatre for newspapers and radio.