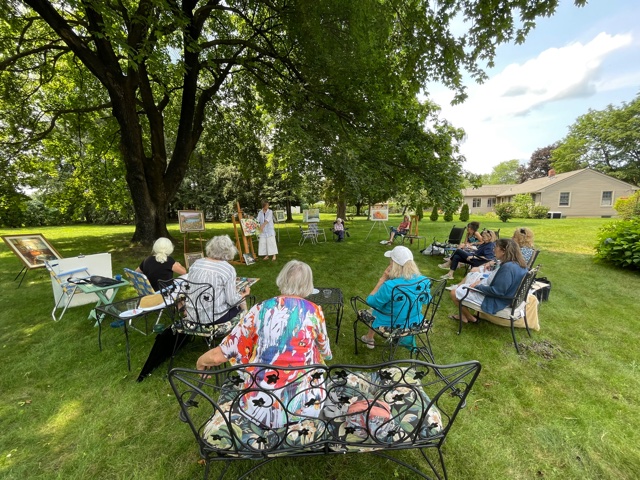 WESTFIELD – Under a canopy of trees with a slight breeze, members of ArtsWEST met for a garden party recently on Ward Road to share each other’s art and catch up after COVID-19 had sidelined their gatherings for more than a year.

The group, now in its 35th year of sharing critiques, conversation and camaraderie, has 13 members. 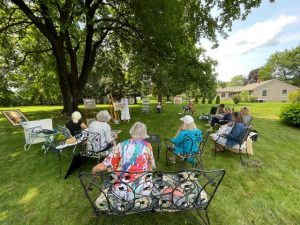 Professional artist Insun Russell, at easel, discusses one of her latest works with members of ArtsWEST. The private group was started 35 years ago in the city. (LORI SZEPELAK PHOTO)

“At one time we were all invited to be a member of ArtsWEST,” said Marie Flahive, who has been with the group almost since its inception. Flahive has an art studio on Cherry Street in the downtown area where members also meet on a regular basis. 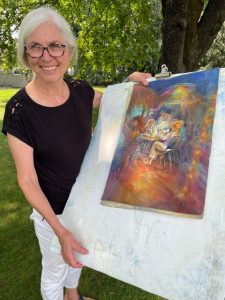 Marie Flahive captured this image of a group of people using their technology to communicate – rather than talking to each other. (LORI SZEPELAK PHOTO)

Flahive noted that the late Ed Mead had been the driving force to bring artists together to share fellowship and ways to market each other’s works.

“He was the heart and soul of the group,” said Flahive, adding that the late Richard Kunst was also a key artist involved in the early days.

Luann Rose hosted the garden party in her backyard and the afternoon was picture-perfect for the gathering that featured easels displaying favorite pieces of artwork and new works by the members. 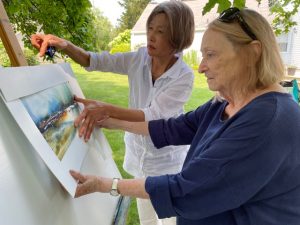 “We had an annual art show at Stanley Park for many years,” said Beverly Gamble, noting she brought a portrait of her husband Cliff. “We have been married for 69 years and dated for seven years.” 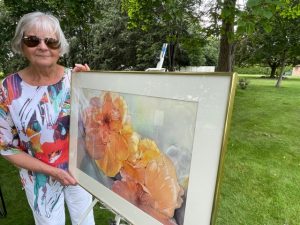 Gamble, a longtime member of the group who works with pastels, said in addition to painting, she also enjoys quilting. 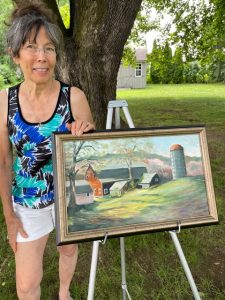 “I like people and I like to learn from other people and hear about their experiences,” she said.

Ellen Westerlind, a member of ArtsWEST for eight years, said she had been invited by Mead to join the group.

“I like the supportive nature of the members and I’ve learned a lot from them,” said Westerlind, adding, “Their ideas are very helpful.”

Susan Racine, a member for nine years, had been invited to join by Jeri Hamel. 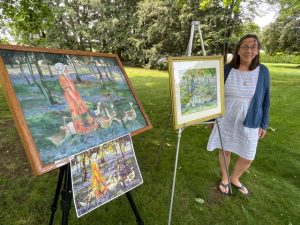 Susan Racine explained how she modernized a painting from the early 1900s. (LORI SZEPELAK PHOTO)

“I like the critiques, since they help you to see something different in your art,” said Racine, adding, “the friendships are also very important to me.”

Racine was displaying an oil painting she had done in 1992 based on the “Goose Girl” work by Stanley Royle in the early 1900s.

“I also updated the work in 2020 and titled it ‘Modern Goose Girl,’” said Racine.

For Joan Steinmeyer, who has been an active member for 33 years, she too enjoys the input she receives from the professional artists.

“They encourage me to paint and we are always supportive of each other and have fun,” said Steinmeyer, adding, “the members are my contact with the art world.”

Insun Russell, a 25-year member, said the group is “always cheering me on.”

“Marie Flahive introduced me to the group,” said Russell, adding, “She is my angel and has helped me to meet other artists.”

Beverly Shurrocks, one of the newer members of the group, was invited to join by Flahive approximately three years ago.

“I was taking classes with Marie and that’s how she got to know me,” said Shurrocks. “I have enjoyed sharing ideas and approaches to art with all of the members. Also, I like the way the members can solve problems with compositions.” 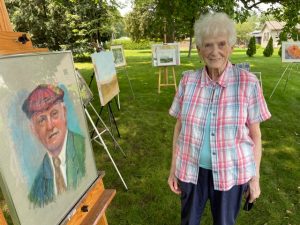 Beverly Gamble displayed a portrait of her husband, Cliff, at the ArtsWEST meeting. The couple married 69 years ago. (LORI SZEPELAK PHOTO) 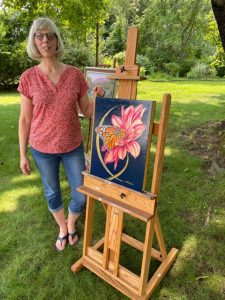 In the early days, Flahive noted, members would meet in each other’s homes. She has relished the friendships and support from professional artists she has received over the years.

“The input and sharing of ideas with each other has been wonderful,” said Flahive.

Jeri Hamel, a member for close to 20 years, shared a similar sentiment.

“I have always appreciated what people do with different mediums,” said Hamel, who also had been invited to join the group by Mead. “The discussions we have on painting help me  improve the way I see the world.”

Hamel displayed a work titled “Country Aire” based on a farm setting she has seen on Coes Hill Road in Southwick. 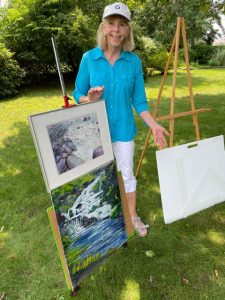 Judy Bayliss featured her acrylic waterfall work and a watercolor of shore stones on the Maine coast during an ArtsWEST meeting. (LORI SZEPELAK PHOTO)

“The painting is one of my favorites,” she said.

Luann Rose, a member for more than 15 years, took a similar view on the group.

“We are honest with each other because we all have a common interest in art,” said Rose. “There are no holds barred.”

Judy Bayliss, a member for more than 11 years, said members are some of her best friends. 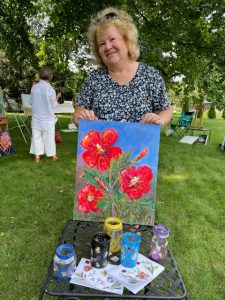 Debby Hess works in acrylic and oils – and enjoys painting on canvas – as well as glass jars and postcards. (LORI SZEPELAK PHOTO)

“Critiques keep me focused on my paintings,” said Bayliss, who works with watercolors and then acrylics on occasion. “Their input makes my work better.” 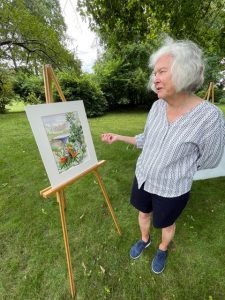 Gretchen Shepard, a member for 20 years, said she enjoys the relationships that have been built over the years.

“We provide inspiration to each other,” she said, adding, “We also always have a fun time together.”

Debby Hess, a member for 15 years, said painting is a solitary activity, so she enjoys every chance to get together with other artists.

“I love to be creative and share that enthusiasm with others,” said Hess.

Cathy Guidetti, a member for more than five years, was invited to join the group by Flahive.

“The best thing about being a member is the support I get from all the members,” said Guidetti. “Everyone truly cares about one another. When you are in a creative slump, or struggling with a particular part of a painting, you can always count on their encouragement to keep going.”

“We are a group of friends who connect with each other and we’re comfortable with each other,” said Flahive. “We enjoy our mix and mingle meetings and have survived for all these years.”