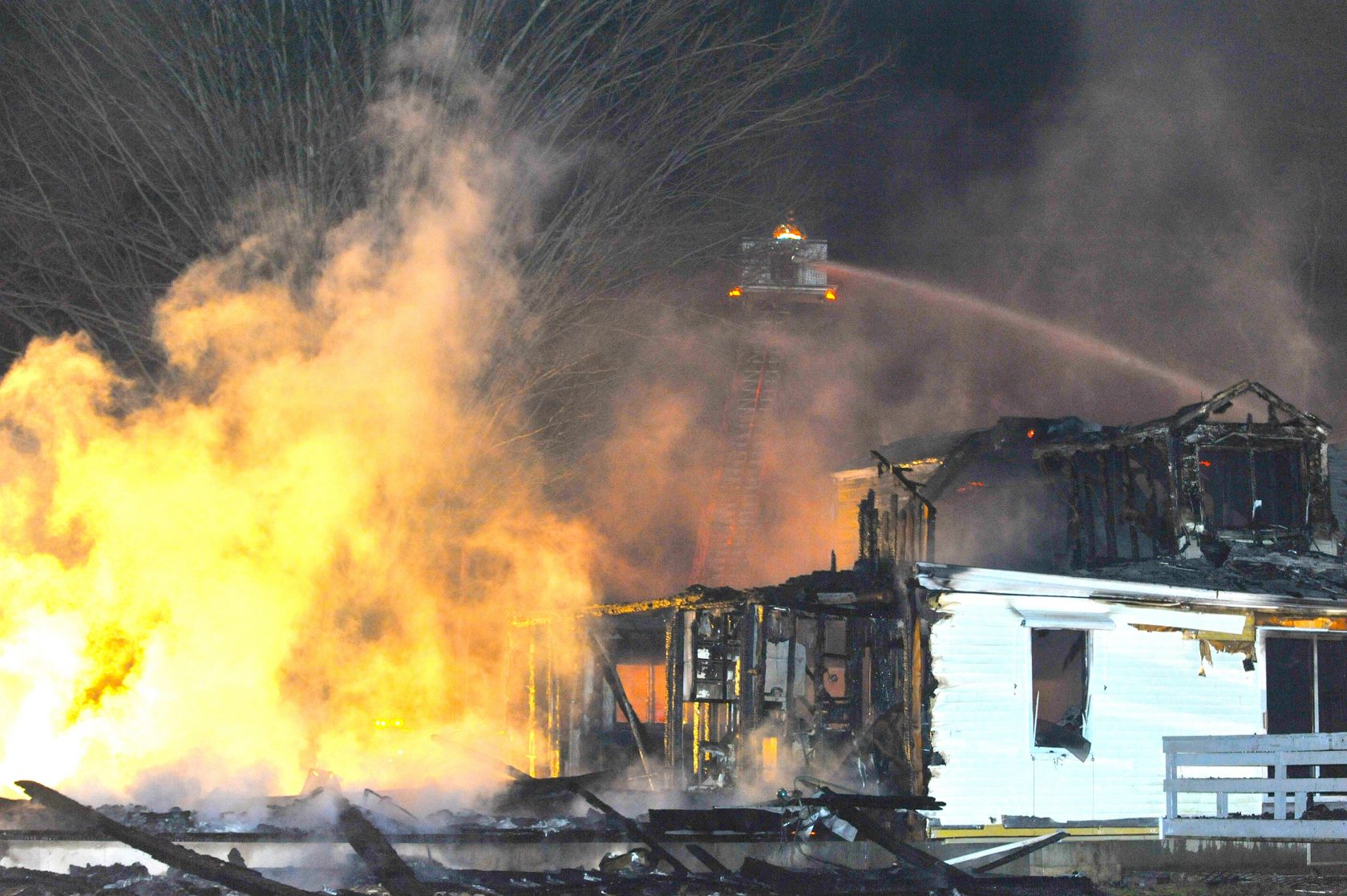 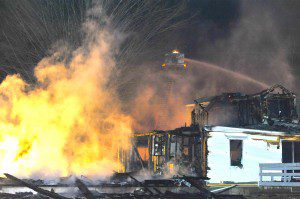 Firefighters use the department’s platform truck to battle a structure fire at 98 Bates Road in Westfield. Officials said the structure was fully involved prior to their arrival. No one was inured in the blaze. (Photo by chief photographer Frederick Gore)

WESTFIELD – Nobody was injured but a Bates Road family was displaced yesterday afternoon when their house was totally destroyed by a fire.
City firefighters report that an alarm was received at 4:26 p.m. Sunday and immediately dispatched four engines, the platform truck, an ambulance and a command vehicle to the single family house.
Dep. Chief Patrick Kane reports that heavy flames were showing when the first firefighters arrived and the fire was fought from outside the building.
He reported that he was told that renovations had been underway at the house and he found that many of the walls did not have sheet rock coverings.
Kane reports that the homeowner said that he had been in his kitchen when fire started to fall from the ceiling and passersby alerted him to the fire.
Kane reports that all the residents were outside the building when firefighters arrived.
The fire was brought under control without complications but Kane reports that the house and contents are a total loss.
A second alarm was sounded at 4:36 p.m. and mutual aid was requested of departments in surrounding communities.
A ladder truck dispatched by the Holyoke Fire Department and a pumper truck sent by the West Springfield Fire Department were stationed at the Broad Street fire headquarters to be available for any additional alarms which might have been raised.
The cause of the fire was not immediately identified and it remains under investigation by the department’s fire prevention officer, Patrick Egloff, with assistance from the Massachusetts Fire Marshal’s office.
Michael Mazza, a state trooper assigned to the fire marshal, said this early this morning that investigators will return to the fire scene about 9:30 a.m. to continue their investigation but said it would be premature to release any findings generated thus far.
He did, however, say that the fire was not suspicious.
City records show that the Cape Cod style house with oil heated forced hot air heating at 98 Bates Road has been owned by Jeffrey S. Oleksak since May, 2008. The purchase price was listed at $200,000 and it was most recently assessed at $243,500.