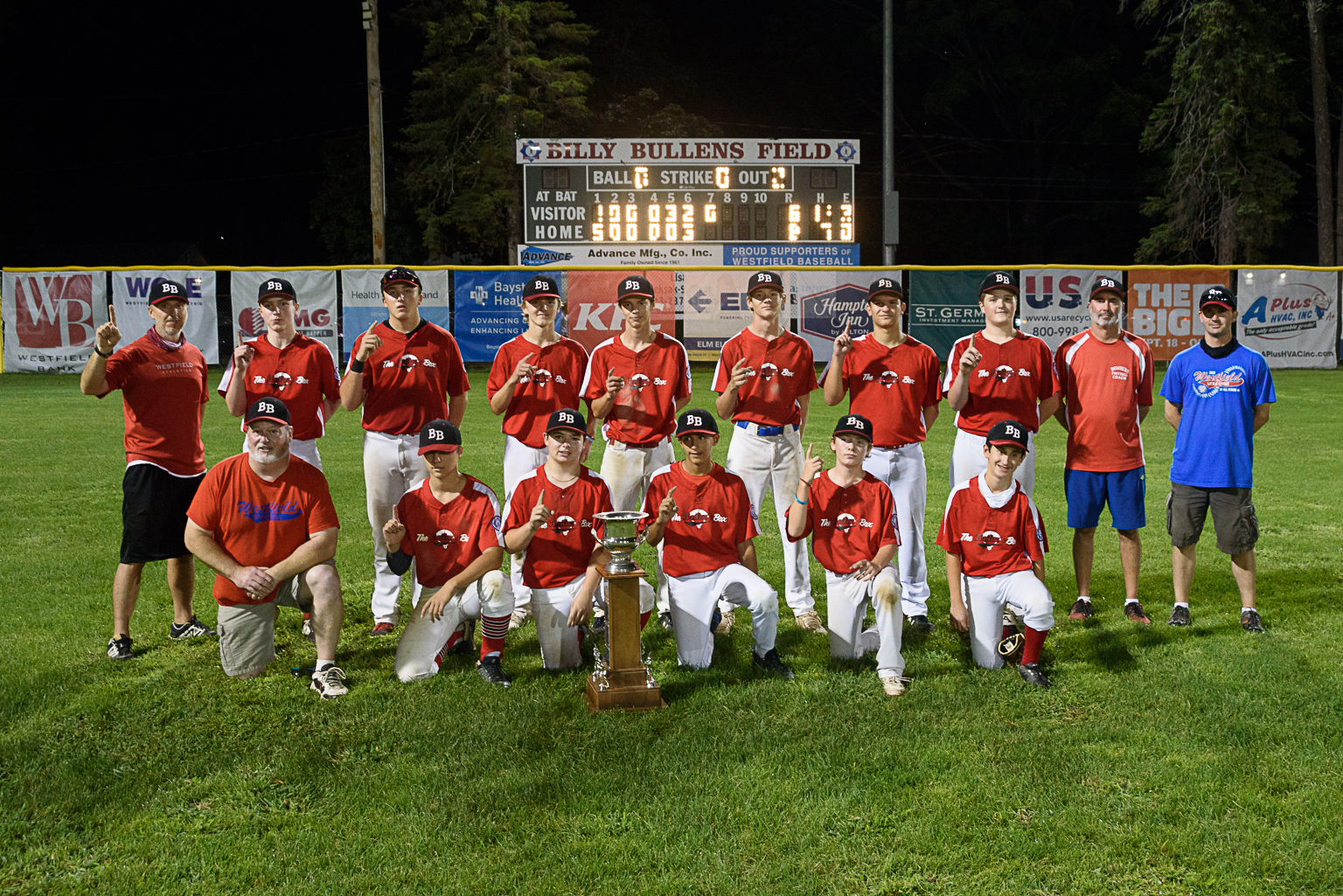 WESTFIELD – It’s only fitting that this year’s Greater Westfield Babe Ruth Baseball Dan Welch City Cup championship would resemble the political landscape with No. 2 Batter’s Box and top-seeded ITI donning red and blue jerseys, respectively.
The “Big Red Machine,” otherwise known as Batter’s Box battled back the blue-and-white uniformed ITI in the City Cup finals 8-6 Friday night at Bullens Field to become the 2020 champs.
The first six batters reached base for Batter’s Box, five with the bat, as the “Big Red Machine” bludgeoned the ball from the outset. ITI mounted a comeback before Batter’s Box rallied late to forge a victory.
“It was an awesome win for a good team,” said Batter’s Box’s Jake Jachym, who went 2-for-2 with a double, walk, run scored and two RBIs. “We all hit the ball. We kind of took innings two through five off but we scored when we needed to and that’s what mattered.” 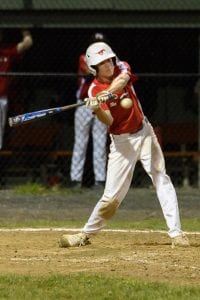 ITI stuck it to Batter’s Box first when Ryan LaPoint hit a RBI single in the top of the first inning.
Batter’s Box lead-off hitter Josh Sturmer blasted one of the game’s first pitches to the farthest reaches of the left corner of the Bullens Field outfield. A walk and stolen base from Cameron Lisowski put two early runners in scoring position. Jachym plated both base runners with a solid hit to left-center field. A Noah Gardner base hit and stolen base immediately put a pair of runners in scoring position again. Aidan King hit a RBI single and stole second base, putting two more runners in scoring position. Connor Niemiec then belted a two-run double to right field for an impressive early 5-1 lead.
The ensuing innings were a bit of a chess match with ITI matching Batter’s Box stride for stride.
After Batter’s Box drove ITI’s starting pitcher from the mound by scoring their fifth run of the game, ITI’s Dylan King took the mound. King came on to retire five straight batters and six of the next seven – – two by K – – before ITI turned to its bullpen again to begin the third inning.
Batter’s Box loaded the bases in the third inning, reaching base by error, a Jachym single, and Aidan King walk. ITI reliever Eli Petrone came in and extinguished the threat with two straight Ks.
ITI did not go quietly into the night.
In the fifth inning, ITI rallied. Paul Lawry singled through the left side of the infield. Jay Scherpa beat out a bunt for a single. Nick Lenfest reached on an error, loading the bases with no outs. Batter’s Box starting pitcher Ted Dunn’s night was over. Dunn scattered five hits over four-plus innings of work, keeping ITI at bay for the most part. At one point over the second, third, and fourth innings, he retired seven straight.
“It got really hyped in the dugout today,” Dunn said. “When I was on the mound, my adrenaline was going through my blood … unbelievably fast.”
With the bullpen now in charge, Kyle Scherpa drew a run-scoring walk. An infield error and outfield error committed on well-placed balls put in play by Bryan Bolio and Evan Mastroianni, respectively, made it a 5-4 game.
ITI took the lead in the top half of the sixth inning with a two-run single from Aiden Poirier.
Batter’s Box battled back.
After going silent at the plate following the first-inning outburst, Batter’s Box issued a loud response in the home half of the sixth. Cameron Lisowski singled, Jachym walked, and Gardner beat out a bunt for a single, loading the bases with no outs. Aidan King and Ted Dunn drew bases loaded walks for an 8-6 lead.
ITI gave Batter’s Box closer Ben King all he could handle in the seventh inning, loading the bases with a Lenfest walk, Kyle Scherpa single and hit-by-pitch. King responded with poise though, getting a force play at home plate and striking out the final batter to end the game.
“I’m glad that this game went the way it did, back and forth – a close, fun game,” Batter’s Box manager Mike Dunn said. “It’s just too bad somebody has to lose.”
It was a somewhat subdued celebration, following the championship victory. Players and coaches appeared unsure of just how to celebrate with social distancing guidelines in place, holding back hugs for jumping and partial fist bumps.
“It’s cool to say you won during a pandemic,” Jachym said.
While Greater Westfield Babe Ruth Baseball League President Dan Welch may be partial to the Cup’s namesake – – it bears the title, Dan Welch City Cup – – the Batter’s Box manager dubbed it something quite emblematic of the times.
“I kind of nicknamed it the ‘COVID Cup,’” coach Dunn said. “It was a very successful season under very difficult circumstances.” 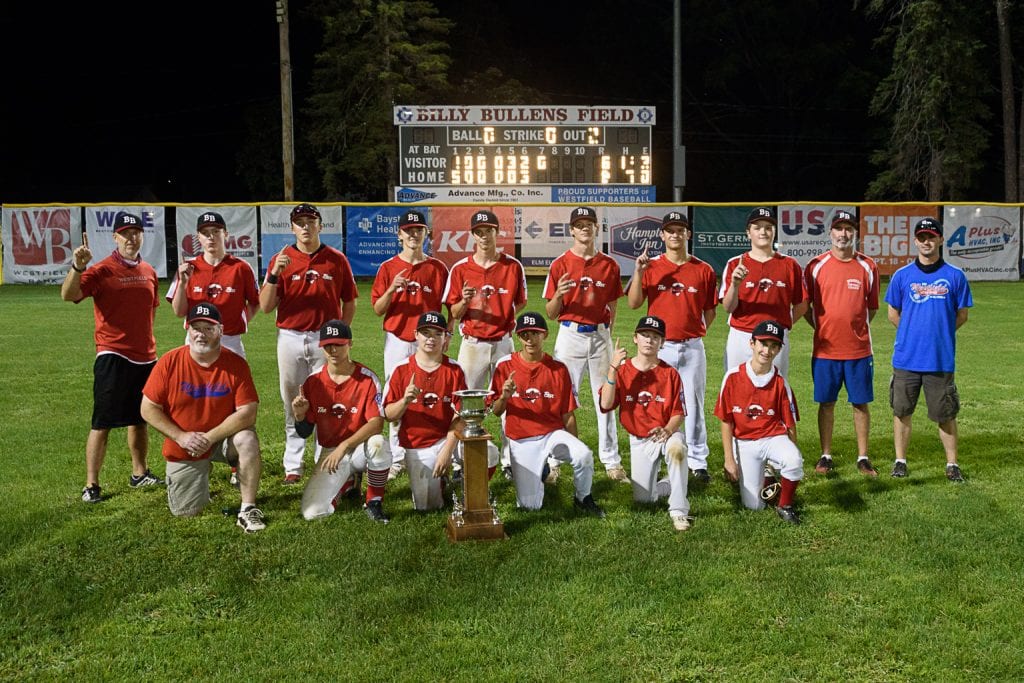