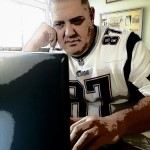 Are you ready? I said – – ARE YOU READY?
Ready or not, the National Football League is back for another season. Our “Beat The Putz” pro football contest is also back due to popular demand. More prizes, more fun, and a new way to enter!
This year, for the very first time, our contest will move exclusively online at beattheputz.com. Choose the winner from every game on the Sunday pro football slate each week. Pick the most games correctly – – and beat sports editor Chris Putz – – to win one of 18 weekly prizes. Each week’s top winner will be entered into the grand prize drawing held at the end of the 2021-22 regular season.

Here is a preview of what’s on tap in Week 1:
Jacksonville at Houston: This might be the lowly Texans only shot at a victory all season. 0-17 is a real possibility.
L.A. Chargers @ Washington: The Bolts look to unleash a storm on the capital city.
Seattle @ Indianapolis: Will Russ cook? If not, the Colts might just pull off the upset.
NY Jets @ Carolina: Former Jets QB Sam Darnold takes on his former employer.
Minnesota @ Cincinnati: Joe Burrow reunites with his college buddy, Ja’Marr Chase, to take on Dalvin Cook and Justin Jefferson.
Arizona @ Tennessee: A.J. Brown and ex-Falcons WR Julio Jones team up with bulldozer running back Derrick Henry to try to push back the Kyler Murray-led Arizona Cardinals.
San Francisco @ Detroit: How long before Trey Lance takes over the reins at quarterback for the 49ers? It won’t need to happen in Week 1 against the lowly Lions.
Pittsburgh @ Buffalo: Bills QB Josh Allen has a plethora of wide receivers to throw to – – Stefon Diggs, Emmanuel Sanders, Cole Beasley, and Gabriel Davis. Steelers veteran QB Big Ben will counter with wide outs Diontae Johnson, JuJu Smith-Schuster, and Chase Claypool, as well as rookie phenom, Najee Harris, at running back.
Philadelphia @ Atlanta: Will Jalen Hurts have success at quarterback for Philly? Will the most ballyhooed rookie tight end of this generation, Kyle Pitts, become the next Rob Gronkowski, Travis Kelce, Tony Gonzalez, or Antonio Gates for the ATL? The answer will begin here.
Cleveland at Kansas City: A potential pitfall game for the Chiefs. The Browns hope to make their living with the ground-and-pound of Nick Chubb and Kareem Hunt. Chiefs’ Patrick Mahomes, Tyreek Hill, and Kelce begin their quest to get back to the Super Bowl.
Green Bay at New Orleans: With Aaron Rodgers now not in jeopardy of jumping ship, the Packers can focus on the task at hand. With the Big Easy under water, the Saints will try to handle matters in Jacksonville.
Denver at NY Giants: It’s like the latest episode of The Walking Dead in the Big Apple. The New York Giants medical staff has been busy with star running back Saquon Barkley (ACL), top wideout Kenny Golladay (hamstring), and starting tight end Evan Engram (calf). Get the ice ready!
Miami at New England: There was Cam. Now there is Mac. Hopefully for Pats fans, Bill Belichik is going back in time to create the next Tom Brady. With a strong rushing attack (Harris/Stevenson/White) running behind an elite O-line, two solid TEs (Jonnu/Henry), the new Edelman (Meyers), a deep threat (Agholor), a sure-handed WR (Bourne) and a top five defense, this Pats team might just be the best since the G.O.A.T.’s departure.
Chicago at L.A. Rams (Sunday night tiebreaker): How long before Justin takes the field in this one?