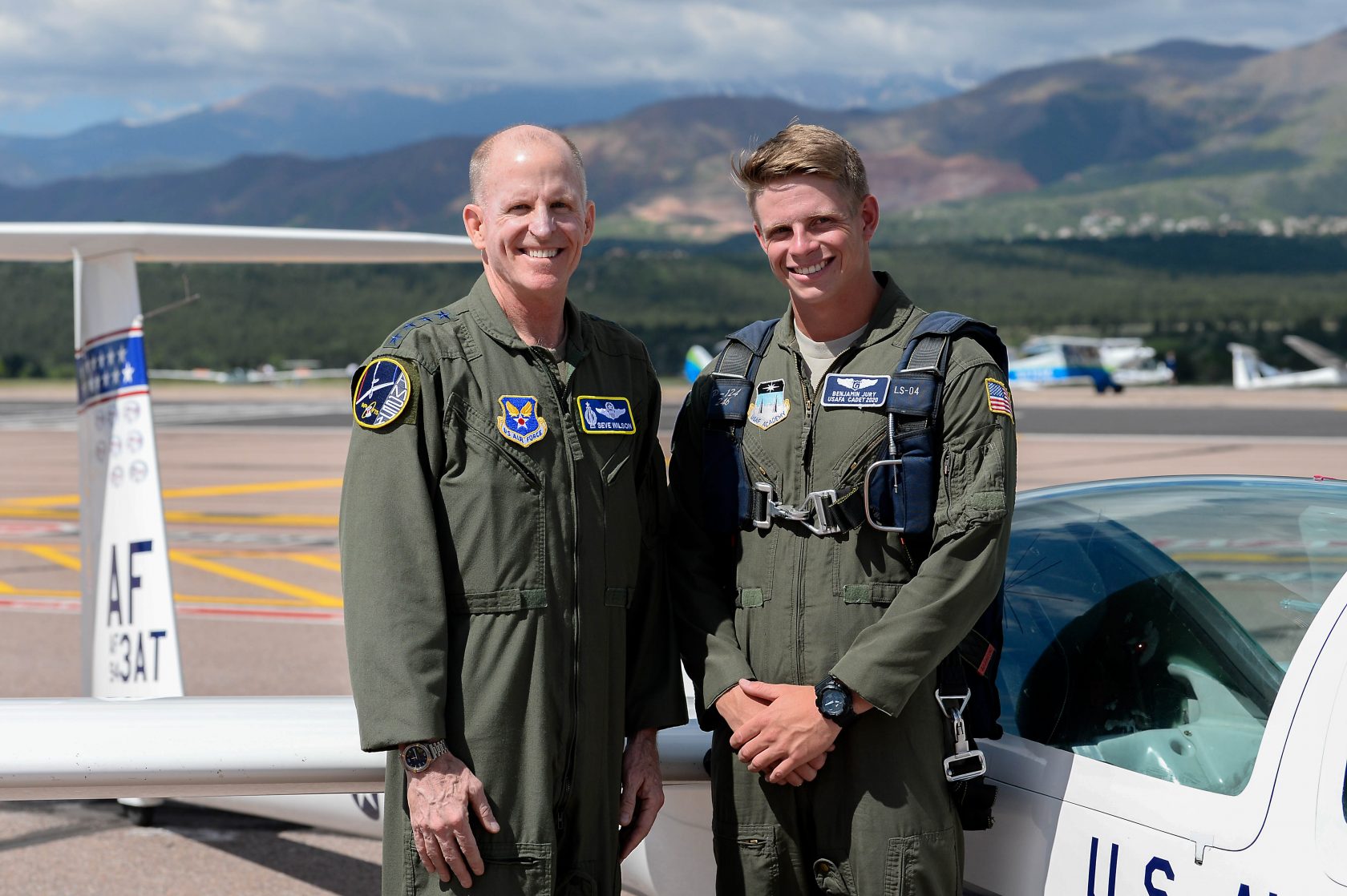 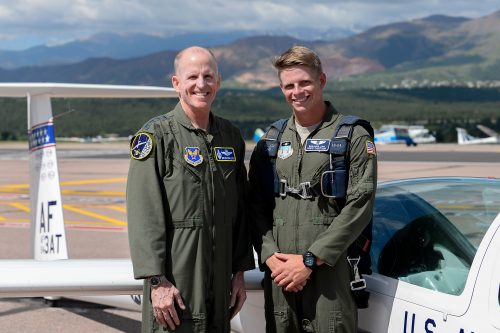 General Stephen Wilson, Vice Chief of Staff of the Air Force and Ben Jury, United States Air Force Academy, Class of 2020. The photo was taken after Ben gave the general a ride in the glider during an earlier visit to the Academy, according to his father Jack Jury. (THE WESTFIELD NEWS SUBMITTED PHOTO)

WESTFIELD – Ben Jury of Westfield was commissioned by the United States Air Force as a Second Lieutenant on April 18 and graduated on April 19 from the USAF Academy in Colorado Springs, Colorado.
Jury, a 2016 graduate of Westfield High School, has orders to report to Undergraduate Pilot Training (UPT) at the Euro NATO Joint Jet Pilot Training (ENJJPT) at Sheppard Air Force Base in Wichita Falls, Kansas on June 18.
In the meantime, he will be visiting with his parents Jack and Elizabeth Jury and his sister Hannah in Westfield.
Catching him during a layover in Philadelphia on his trip home, Jury described the airport scene as “spooky.” “There are a tenth of the people as usual. On the plane, we all had a row to ourselves,” Jury said.
The end of the year and graduation ceremonies at the Academy were also unusual. Jury said the lower three classes were sent home early due to the pandemic, while the seniors stayed to finish their classes online.
“On campus, they strictly enforced the social distancing rules of the CDC and the government,” Jury said, including single rooms with no roommates. He described it as quiet.
Families and guests were not able to attend the graduate ceremonies. Jury said the graduation went well, given the circumstances, although he said it was “disappointing” not to have family attend. “It was very rewarding; the biggest accomplishment of my life,” he said.
His family was watching at home. Jack Jury said the family watched both the commissioning ceremony and the graduation. “During the commissioning ceremony, we actually got to see him. In the graduation, there are 900 to 1000 kids,” he said.
“You kind of feel for the kids. Going through all they did, they came up kind of short. You don’t have the big ceremony and all of the events,” Jack Jury said, adding, “Watching him graduate, it was a bit emotional at times. It was good experience overall. Had this happened 10 years ago, we might not have had the opportunity.”
The graduation did have a surprise on-campus visit from Vice President Mike Pence, who was supposed to participate by teleconference, but came in person instead.
Jury called it “really cool. It shows how much we mean to the country that the leader of the COVID-19 task force would come out. It meant a lot to see him come out just to see us.” 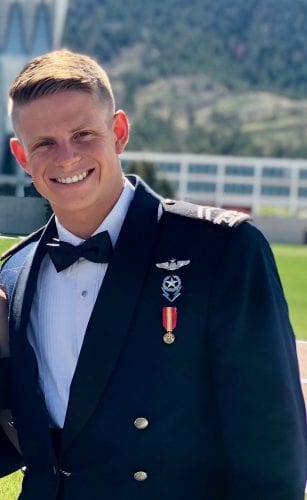 Asked how he got interested in flying and in the Air Force, Jury first spoke about a school trip from North Middle School to Space Camp in Alabama. He also participated in Wright Flight at Barnes Airport, and said it was a slow buildup into it after that.
Neither his father, who is a physical therapist at Mercy Medical Center, nor his mother Elizabeth Jury, a speech pathologist in Suffield schools, fly. Jack Jury said Ben’s interest began in eighth grade with Wright Flight, and he started looking into the Academy right after that.
“There is a lot that goes into the process of getting accepted. Ben engaged in it early on, and committed all the way through,” his father said.
Joe Mitchell, former Westfield economic development director and Air Force combat pilot, has also tracked Jury’s interest in flying and in the Academy. “Ben and I (and his family) have gone flying a number of times. He is a good pilot and has a very bright future in front of him,” Mitchell said.
Mitchell said that Jury was a glider pilot and instructor at the Academy, a fact he said the readers of The Westfield News would find interesting.
Jury said he joined a squadron dedicated to gliders, which he had applied to as a freshman. He served on the aerobatic demonstration team, comprised of five students from each class. Jury traveled around the country competing and taught the most advanced aerobatics you can do in a glider to other cadets, he said.
Jury said gliders are used as a training tool at the Academy and are cheaper to fly than a jet. He described flying a glider as having a “different sense of airmanship.” He said flying a glider taught him a lot he wouldn’t have learned otherwise.
Jury’s goal however is to fly fighter jets. He said he grew up across from Barnes, watching the A-10 and F15 jets fly. He said his interest in flying them grew, after “looking more into it, understanding the mission and the role they play in defending the country.”
Mitchell said acceptance into ENJJPT at Sheppard Air Force, where Jury is headed, is very selective. “It is a program where the USAF trains its pilots in addition to the pilots of our NATO allies and other friendly nations. It is also the preferred training program for a follow-on assignment to fighter aircraft,” he said.
Jury said of the 967 who graduated from the Academy in 2020, 500 will be training as pilots, and 45 were selected for ENJJPT. “Some of my good friends will be going. It will be nice to stick together,” he said.
Jury said his service commitment to the USAF after he finishes pilot training is ten years in active duty.
Meanwhile, until he reports to Sheppard AFB on June 18, he will have a chance to catch up with his family in Westfield. “This is the longest I’ll be home since I left in 2016. It will give me a chance to show some appreciation for all the support they showed me,” Jury said
Asked whether he will be mowing the lawn, Jury said, “I’m sure my Dad has some stuff for me.”