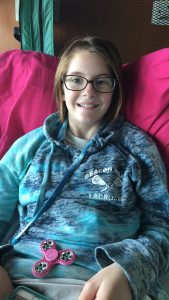 A benefit dinner is being held on Sunday at American Legion Post 338 for Ashley Nelson. (Photo courtesy of Jim Nelson)

SOUTHWICK – A benefit dinner is being held for Ashely Nelson, the teenage girl who was struck by a car while riding her bicycle along Route 10 and 202 in Southwick on July 12. The benefit takes place this Sunday, August 20, at American Legion Post 338 from 4 p.m. until 7 p.m., all of the proceeds will go towards covering the expenses to ensure Nelson receives the best medical treatment possible.

Although the opportunity to purchase tickets in advance has passed, people still have the chance to buy tickets at the door. The costs are $23 for adults and $20 for both seniors and children from the ages four to 12. According to Nelson’s father, Jim Nelson, a close family friend, Allyson McCorison, is the one who has been organizing the event.

Jim is very appreciative of the generosity that people have expressed since his daughter’s accident and encourages everyone to join the benefit on Sunday.

“Since this tragic event happened we have seen our community come together like no other,” said Nelson. “Please come out for some good food, great company, and some good prizes to win in the raffles.”

The Westfield News first reported on the younger Nelson being struck by a vehicle around 3:15 p.m. on July 12 on Route 10 and 202, more specifically on the intersection of College Hwy and Bugbee Road.

According to Jim Nelson, Ashley just recently came home from the hospital and is doing outpatient therapies but improving every day.

James Leydon, the Communications Director for the Hampden County District Attorney’s Office said that the driver of the involved vehicle has a criminal complaint against them for negligent operation of a motor vehicle and is being sought at Westfield District Court.