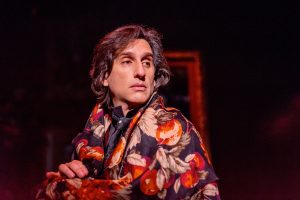 Hershey Felder’s Our Great Tchaikovsky is only at Hartford Stage through August 27, and it’s the riveting portrait of Piotr Ilych Tchaikovsky, the beloved composer, as envisioned by playwright, actor, pianist and scenic designer Hershey Felder. The evening is much more than a “and then I composed this” melange of biographical portrait and piano recital. It’s a tour-de-force performance by Felder, beautifully directed by Trevor Hay. Felder’s set design, with outstanding lighting and projections by Chrisopher Ash, transform Hartford Stage into a Russian countryside dacha, music conservatories in Moscow and St. Petersburg, and stages of the world’s great concert halls and theatres.

Tchaikovsky is certainly well-known to the classical music world, and is one of the most popular composers to cross over to the pop idiom. His Nutcracker score graces area stages every holiday season; his 1812 Overture is a staple of Fourth of July pops, usually accompanied by fireworks. The ballet world knows Sleeping Beauty and Swan Lake. The opera world knows Eugene Onegin and The Queen of Spades. 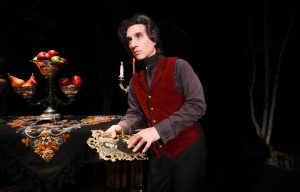 And Hartford knows Hershey Felder. Felder brought his portraits of Gershwin and Chopin to Hartford Stage a decade ago. He’s also known for his one-man shows with music about Bernstein and Berlin. He directed Mona Golabek’s The Pianist of Willesden Lane, her portrait of her mother’s escape to England on the Kindertransport during World War II.

Tchaikovsky’s personal life was riddled with drama. Ken Russell dramatized his life in a film called The Music Lovers with Richard Chamberlain and Glenda Jackson. As a child, the composer sees his mother die horribly from cholera. His close friend Rubenstein’s death impacts him. He gets involved with a wealthy patron, Madame Nadezhda von Meck. He marries another woman despite being a closeted gay man. He has mental issues including depression, and he dies at age 53, from ingesting cholera-laced water, either accidentally or on purpose–perfect fodder for Felder. .

Incidentally, a former Hartford-based arts group, Chamber Music Plus, for many years, presented portraits of 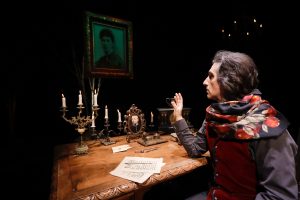 composers, with the emphasis on the music. In 2001, they brought Harvey Fierstein to Hartford in a program, Confidentially, Chaikovski for their Parallel Portraits series. Felder, however, merges the theatre and the music, where they both get an equal showcase.

Hershey Felder is the artistry that makes Our Great Tchaikovsky a work to be savored. As an actor, he makes Tchaikovsky and the other people in his life believable, mastering the Russian accents, yet articulating each name and place clearly. He intersperses these with the character of Hershey Felder, who ties together the world of Tchaikovsky with the issues of modern day Russia. As a playwright, he merges the man and the music into one seamless solo performance that is rich on every level. As a musician, his keyboard prowess is astonishing, especially as he performs excerpts from The Nutcrakcer and the 1812 Overture.

Our Great Tchaikovsky is as potent and powerful as the other solo performances by Mona Golabek and James Lecesne seen at Hartford Stage in recent seasons, and the intimate playing space added to the brilliance of this production. Bravo!