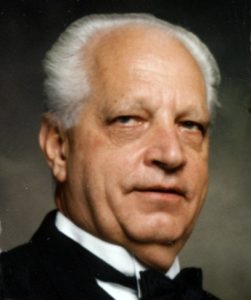 Francis D. O’Brien, 77, (1940-2017) also known as “Obie” and Skippy” passed away on Friday, August 18, 2017 at Baystate Medical Center surrounded by his loving family. He was born in Springfield to the late Francis O’Brien and Alberta (Zolyn) Gutowski and was a 1958 graduate of Westfield Trade. Francis received an Associate’s Degree in Business from Manchester Community College in Connecticut and his Bachelor

’s in Business from Central Connecticut State College in New Britain. He served his country with the United States Navy from 1960-1964 and was honorably discharged as a ETN 3rd Class. Francis was employed as the manufacturing supervisor for Colts Manufacturing in West Hartford for 33 years, before he retired. He was a member of the American Legion Post 124 in Westfield. Francis is survived by his beloved wife of 45 years, Shirley A. (Kriesak) O’ Brien, his loving sons, Gary T. O’Brien and his wife Sherry of Thorndike, MA and Robert F. O’Brien and his wife Melissa of Agawam, two brothers, Daniel O’Brien and his wife Beverly of Westfield and Douglas O’Brien and his wife Denise of Chicopee, his cherished grandchildren, Ashlinn Ellis and her husband Dustin, Andrew O’ Brien, Annie O’Brien, Dakota O’Brien, McKenna J. O’Brien, Steven Dunn, Sarah Gamsby and her husband Mathias, Ian Gamsby and Glenn and Natalie Lane, his great granddaughter, Gabriella Gamsby, his brother in law, Roger Kriesak and his wife Nancy and several nieces and nephews. He was predeceased by a son Brian O’Brien in 2007. He loved his animals and will be sorely missed by his pet, Kayla. A Funeral Home Service will be held on Wednesday at 7PM in the Firtion Adams FS, 76 Broad St. Westfield. Visiting hours will be held prior to the service from 4-7PM in the funeral home. Burial will be private and at the convenience of his family. In lieu of flowers contributions in Francis’ name may be directed to the Westfield Animal Shelter, 178 Apremont Way, Westfield, MA 01085. www.firtionadams.com