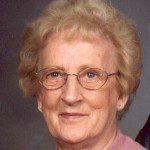 WESTFIELD – Betty Kay ( Helstrom ) Dickinson, 82, of Westfield died Friday at home after a long illness, with her family, pastor and friends by her side. Born on June 8,1930 in Caribou, Maine, she was the daughter of the late Carl and Adina (Holts) Helstrom, and was raised on the family farm on Tangle Ridge Road in Perham.
She began her education at the North Star School, where she lit fires in the mornings before school and was a 1949 graduate of Caribou High School. Betty and her husband Wendell lived in Colby where they raised their three daughters and moved to Westfield in 1975. She was an active member of the First Baptist Church of Woodland where she served as a Sunday school teacher, deaconess, and youth leader. She was also a member of the Mountain View Baptist Church of Holyoke, and has found great love and friendship from that church family. Betty was a talented, capable, hardworking woman who made everything she did seem effortless. Her husband, girls and their families were so important to her. She was a devoted and generous wife, mama, grammy, mimi, other mimi and grammy Betty.
She is survived by her loving husband of sixty-four years, Wendell; three daughters, Jean Jacobs and her husband Greg of Colfax,Wisconsin, Luanna Guerrette and her husband Gary of Easton, Maine, and Penny O’Sullivan and her fiancé Ray Haluch of Ludlow; a sister, Wanda Loveless and her husband Claud of New Castle, Indiana; two brothers, Carl Helstom and his wife Pat of Boynton Beach, FL, and Dale Helstrom of Van Buren, Maine. Betty also leaves six grandchildren, Kristi Jacobs Bartlett, Curt Guerrette, Jonathan Jacobs,Wendy Guerrette Dunham, and Ryan and Corey O’Sullivan; ten great grandchildren, Katherine and Sarah Bartlett, Sheridan, Sydney, Jack and Sophie Guerrette, Nicholas Jacobs, James Martin Dunham, and Lyla and Madeleine O’Sullivan. She is also survived by several nieces and nephews, who were very special to their Aunt Betty, and her other girl, Peggy Conroy Espling.
Her funeral will be Wednesday at 10:00 a.m. at the Mountainview Baptist Church, 310 Apremont Highway, Holyoke. A graveside service will be on Friday at 2:00 p.m. at Fairview Cemetery in Perham, Maine. Calling hours will be held on Tuesday at the Firtion-Adams Funeral Service,76 Broad Street,Westfield, MA 01085 from 5:00 p.m. until 8:00 p.m.
In lieu of flowers donations may be made to the Mountain View Baptist Church, 310 Apremont Highway, Holyoke, MA 01040.
firtionadams.com