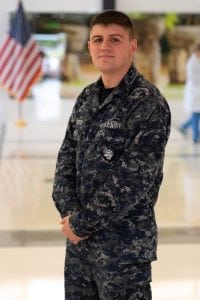 Hospitalman Kyle Bessette is serving with the hospital in Guam.

A Navy hospital corpsman is responsible for the prevention and treatment of disease and injury, assisting health care professionals in providing medical care to personnel, conducting preliminary physical examinations, as well as performing medical administrative, supply and accounting procedures.

“I enjoy working here because it’s given me so many opportunities to experience all aspects of my job,” said Bessette. “I’ve done surgeries so it’s something that I thought I’d never do.”

Bessette credits success in the Navy to many of the lessons learned in Blandford.

“I learned to help others by putting myself in their shoes. This has helped me in the Navy,” said Bessette. “I’ve learned that what I learned growing up has carried with me.”

Naval Hospital Guam is comprised of the main hospital in Agana Heights and two branch clinics, medical and dental, on Naval Base Guam. The hospital’s staff consists of 516 active duty and 201 civilians, contractors, reservists and volunteers who serve more than 26,000 beneficiaries.

According to officials at the U.S. Navy’s Pacific Fleet headquarters in Pearl Harbor, Hawaii, the ships, submarines, aircraft and Navy personnel forward-deployed to Guam are part of the world’s largest fleet command and serve in a region critical to U.S. national security. The U.S. Pacific Fleet encompasses 100 million square miles, nearly half the Earth’s surface, from Antarctica to the Arctic Circle and from the West Coast of the United States into the Indian Ocean. All told, there are more than 200 ships and submarines, nearly 1,200 aircraft, and more than 130,000 uniformed and civilian personnel serving in the Pacific.

“Just the learning experience here is great. There’s such a camaraderie with everyone,” said Bessette. “If you’re willing to learn, you can do anything.”

Though there are many ways for sailors to earn distinction in their command, community, and career, Bessette is most proud of finding his career path in the medical field.

“I’m grateful for the Navy giving me the opportunity to better my life and mature,” Bessette said.

As a member of one of the U.S. Navy’s most relied upon assets, Bessette and other sailors know they are part of a legacy that will last beyond their lifetimes, one that will provide a critical component of the Navy the nation needs.

“The Navy gave me opportunities to get on my feet and do what I want to do with my life,” Bessette said. “I’m proud to say that I can wear this uniform.”