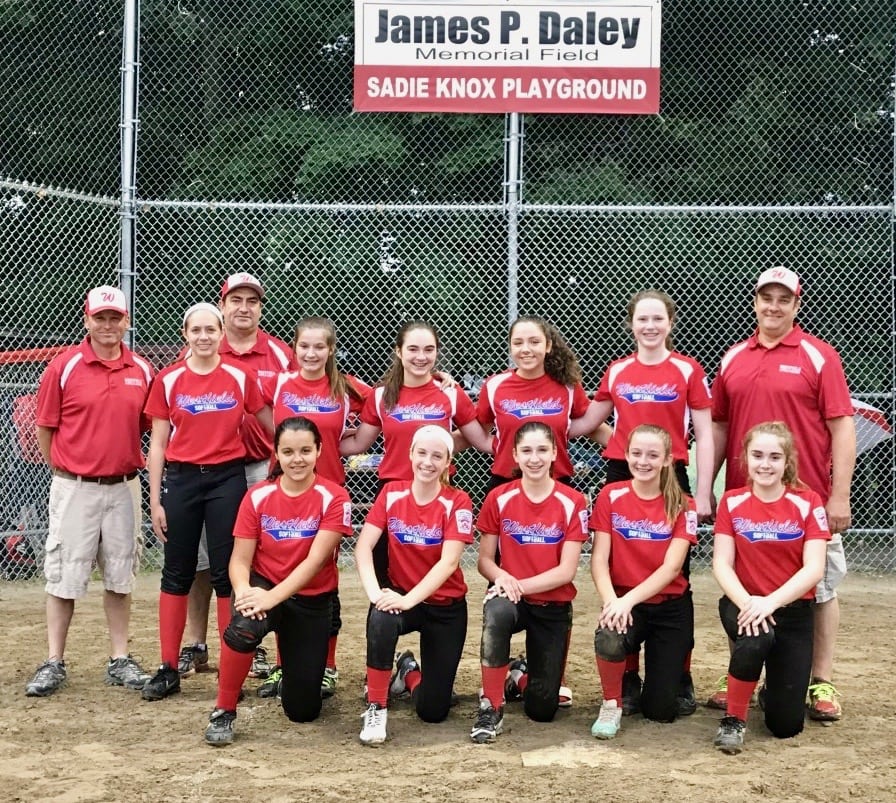 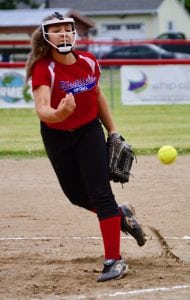 Westfield Little League Softball Juniors pitcher Erin Gour fires a pitch toward home plate. Gour was sensational on the mound, and at the plate where she hammered two home runs. (Photo by Chris Putz)

WESTFIELD – Forget the Whip City, it was Blowout City for the Westfield Little League Softball Junior All-Stars.
Erin Gour hammered two home runs and threw a gem on the mound for Westfield, a 23-1 rout of Agawam Wednesday night at Sadie Knox Playground’s James P. Daley Memorial Field.
Gour went 4-for-5 at the plate. She recorded six strikeouts in tossing a one-hitter.
“They all played awesome,” Westfield Junior All-Stars manager Tyson James said. “Everybody hit the ball well. We had great base running, great pitching, and great defense when we needed it.”
It was evident from the outset how determined the home team was.
After posting a run in each of the first and second innings, Westfield blew it open with a nine-run third.
Gour got the party started with a solo homer to begin the third. Kelsey Gagnon (double), Audrey Burke (triple), and Carly James (triple) also had extra base hits in the inning. 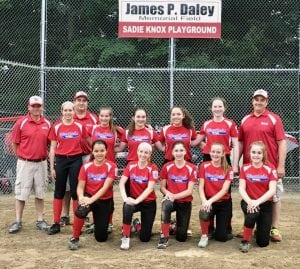 Gour put an exclamation point on the victory, clobbering a pitch for a three-run homer in the fourth inning.
“A lot of these kids – this is their fourth year we’ve been with them since they were first-year, 12-year-olds and they’ve worked real hard to get here,” coach James said. “They deserve to win it.”
For the first time in four years, this group of ball players had to earn the right to play in the sectionals. The last three seasons they received a bye with no opponents to play.
“We’re ready to roll,” coach James said. “(We’re) not done.” 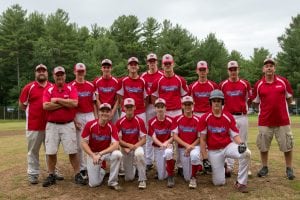 The Westfield Little League Baseball Senior All-Stars also enjoyed a blowout win of their own, scoring double-digit runs to capture a district title. No details were provided.

LITTLE LEAGUE BASEBALL ALL-STARS
12-YEAR-OLDS
Westfield American 4, Southampton 2
Westfield American posted its third straight victory.
Westfield American jumped out to a 2-0 lead in the bottom of the second inning. Patrick Moore doubled down the right field line to plate Andrew Phaneuf and came around on Eli Petrone’s single up the middle.
Westfield added to its lead with two more runs in the third inning.
Nick Lenfest got things going with a single. After Emmett Garfield walked and Colby LaPoint singled to load the bases, Frank Maffia walked to force in Lenfest. Petrone followed with his second hit of the game to plate Garfield.
Southampton closed the gap to 4-2 with a pair of runs in the fourth.
With runners on first and second and two outs, Westfield pitcher Josh Wagner induced a grounder to third that Ted Dunn handled to end the threat.
Wagner was brilliant on the mound, surrendering just three hits while striking out five in 5 2-3 innings. Lenfest closed things out with a strikeout, stranding runners on second and third in the process.
Westfield’s defense was paced by second baseman Colby LaPoint.
Petrone went 2-for-2 with a pair of RBIs to pace the offense. Garfield reached base three times, drawing two walks and adding a single. Paul Lawry added a double.