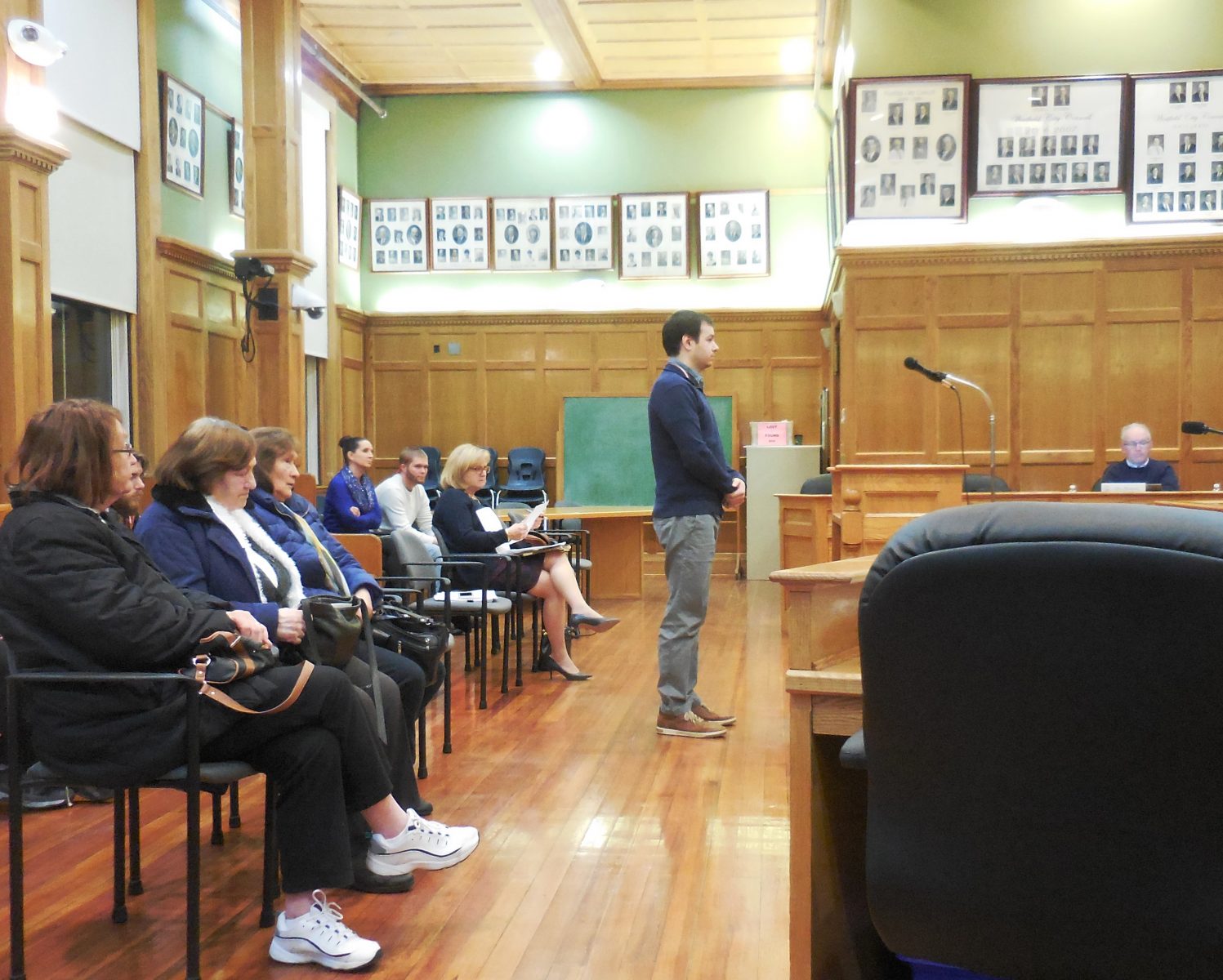 WESTFIELD – On Tuesday, the Planning Board held a public hearing for a special permit for a lot size reduction at 31 Murray Avenue. The request came from Ivan Mokan of the New Life Church of God on 30 Montgomery Street, who intended to purchase the parcel created to expand the church’s parking lot. Vinskey said the homeowner was also party to the application. 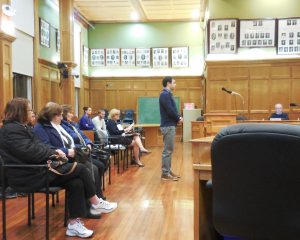 Sergey Mokan of New Life Church of God addresses the Planning Board on Tuesday. (Photo by Amy Porter)

Sergey Mokan, the applicant’s son, said his father was overseas and he himself was not 100-percent prepared for the hearing. He reiterated the intention was to expand the parking lot at the church, and they needed to use a part of the back yard of 31 Murray Avenue.
Planning Board chair Philip McEwan asked board members if they had any questions. “I’ve got some major concerns,” he said, noting that the ordinance states that the Planning Board may issue a special permit to allow for a reduction provisionally.
McEwan said he was present when the ordinance was drafted, and the purpose and intent were “for the Mom and Pop who bought a double lot in World War II,” before the zoning changed to require 50 feet of frontage, to allow them to sell the second lot. “Not put in a parking lot,” he said, adding they would also be creating a landlocked parcel in the back yard of the homeowner on 31 Murray Avenue.
“Nothing in this ordinance is about this parking lot extension. We’ve probably done 20 of these – every time resulted in more residences,” McEwan said.
City Planner Jay Vinskey replied that the application is not for a parking lot, but for a lot line change and a lot reduction. “This is just the adjustment of the lot line. The church lot gets bigger, the house lot gets smaller,” he said.
“This is a residential ordinance, which has nothing to do with any purpose other than residences,” McEwan said.
The chair then opened the hearing up to the public for question of fact, or for anyone present who wished to speak in favor or opposition. Mokan stated that the owner of 31 Murray Ave was present and in favor of the proposal. McEwan addressed the owner, who did not respond, and did not appear to understand the questions being asked.
“It appears the reduced lot is the same as the other lots on the street,” said board member John Bowen.
Vinskey said the city did have the building inspector’s determination on the lot line change. “We want people to come before the board. We could certainly change the way things are done, if the board wants,” he said.
“The building inspector does not make determinations, and does not call the shots for special permits,”
McEwan said to Vinskey, adding, “I don’t think you’re right this time.”
“I’m not saying it has to make sense. The relief is for the residential lot. I think their plan is for parking for the church in the future,” Vinskey said. Board member Cheryl Crowe asked if abutters had been notified. Vinskey said they had, and he had not heard any feedback.
Board member Raymond St. Hilaire asked whether it would require two applications.
“There’s no approval for parking, I made that clear. I wasn’t here when (the ordinance) was being discussed or drafted, so I can’t speak to its intent,” Vinskey said, adding that if the intent were as McEwan said, to create an additional residential lot, it should be more clearly stated.
“The intent was to create a house, not to circumvent the process. If everyone in the neighborhood had half acre lots, would that be ok? It’s not our responsibility to solve the church’s parking problems,” McEwan said.
“I want to make sure the applicant understands that he may not be able to do what he wants to do; so he ends up purchasing the land, and it may end up a playground for the church and not a parking lot. If we do approve the reduction, the applicant could buy the land and come back and not be able to do what he wants to do,” board member William Carellas said.
McEwan said they would have to do an engineered drawing with drainage and landscaping.
“The applicant is not even here. Can we continue pursuant to the applicant being here, and making sure he understands this?” asked Bowen.
“Do you really think this warrants a continuation?” asked Crowe. She said the applicant did not come to the hearing. “Plain as day, I don’t think we should continue it,” Crowe said, before making a motion to close the hearing, which passed.
“It does not serve the purpose and intent of the ordinance and creates a land-locked parcel,” McEwan said, to which Carellas agreed. Crowe made a motion to deny the special permit, which was seconded, and denied unanimously
As they exited following the meeting, the homeowner asked Mokan what happened, and said she couldn’t hear what was being said. She appeared surprised when Mokan said the permit was denied.