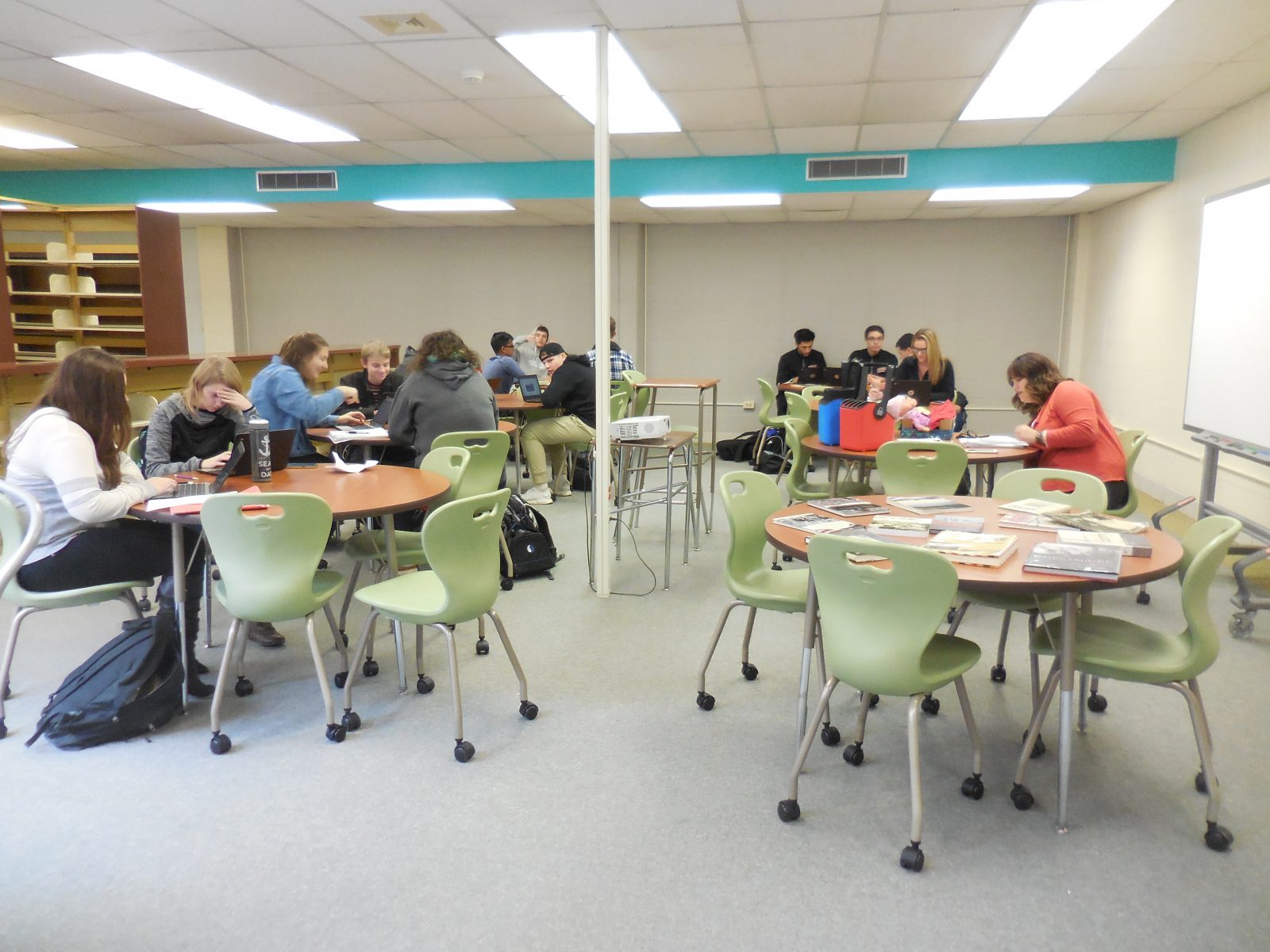 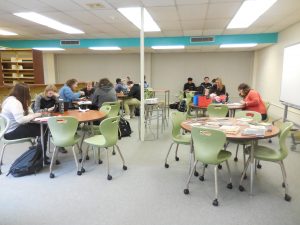 Teacher Nicole Choiniere and her social study students in the new Chromebook classroom area in the library. (Photo by Amy Porter)

“They gave their class gift to the WHS library to create a classroom space with new technology in the library,” said Berestka. She said teachers book their classes to come to the library to work on research projects. Students have Chromebooks, which can access the library website and online catalog to search for printed material and ebooks. Berestka also puts out books related to the topic of study.
“For the teachers and students, it’s a different space outside of the classroom which allows them to integrate library material,” she said.
Last week, social studies teacher Nicole Choiniere’s class was working on a research project about Japanese internment camps during WWII. “I love it. It’s been fantastic to have extra space, and it’s nice to have well-functioning computers,” Choiniere said.
The new furniture is from Columbia Manufacturing in Westfield. Berestka said they were very helpful in choosing the tables and chairs. When she couldn’t find a way to pick it up, she called the company and they offered to deliver it. “Ali (Salehi, president of Columbia Manufacturing) is such a generous person to the school system,” she said. 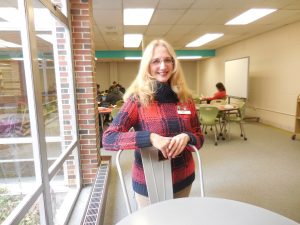 Prior to the class gift, Berestka and her staff, along with students in the Library Club were already working on creating a library café space behind the courtyard. They had bought high top tables and some furniture. Now they are looking to purchase new furniture, to give it more of a café feel. National Honor Society students have volunteered hours to paint the walls in the library café almond with red accents A Keurig machine which they use to make and sell hot cocoa and coffee flavored drinks (no caffeine drinks) will also be moved into the café space. 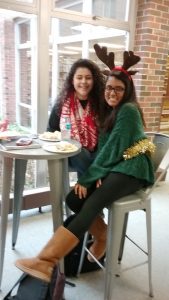 WHS top readers Gilda Cardenuto and Shantni Amin were among those feted at the holiday kickoff for the library cafe. (Photo submitted)

Berestka said they hope to hold performances in the library café on a monthly basis, such as poetry readings and jazz groups. “I want to get comfy chairs, display new books, newspapers and magazines. I hope to purchase some lamps to tone down the lighting, and make a comfortable seating area for kids,” she said. Her goal is to draw students in, and hopefully get them to read a new book.
In December, a kickoff for the library café was held to honor the top readers from each class, those who checked out the most books from the WHS library. The event also honored the Library Club members, who Berestka said have been instrumental in helping to create the café space and raising funds for the endeavor via bake sales and pizza sales. 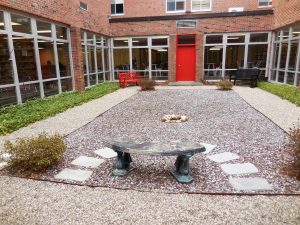 The library courtyard was redesigned by Andrew Peloquin (Class of 2017) as an Eagle Scout project. (Photo by Amy Porter)

The holiday party served lunch catered by Culinary Arts students who made sandwich wraps and a cake for the event, and the Jazz Combo provided music and vocals. On Thursday, Feb. 8, the library Café will also host the judges of the Science Fair for a luncheon catered by Culinary Arts students.
“We all collaborate,” Berestka said.
The library café sits right behind the courtyard of the library. Last year, for his Eagle Scout project senior Andrew Peloquin redesigned the courtyard, tearing out the weeds and laying down stone. The effect is striking, with brightly painted benches surrounding the stone.
“The Andrew Peloquin courtyard was the beginning of the Renaissance,” Berestka said. When the weather cooperates, students are able go out there and sit, quietly, as noise travels up to the classrooms on the second floor when the windows are open in nice weather. Berestka said she’s even had birds nesting there.
“The courtyard was the beginning of the transformation. When Mr. Jendrysik came on board, he was very much in favor of a library café,” she said.
Berestka, who has served as librarian for fourteen years at the school said the new spaces are good for the students, giving them the freedom to move around and make decisions
“I think back to my college library. More of an independent learning space like this fosters independent learning,” Berestka said.