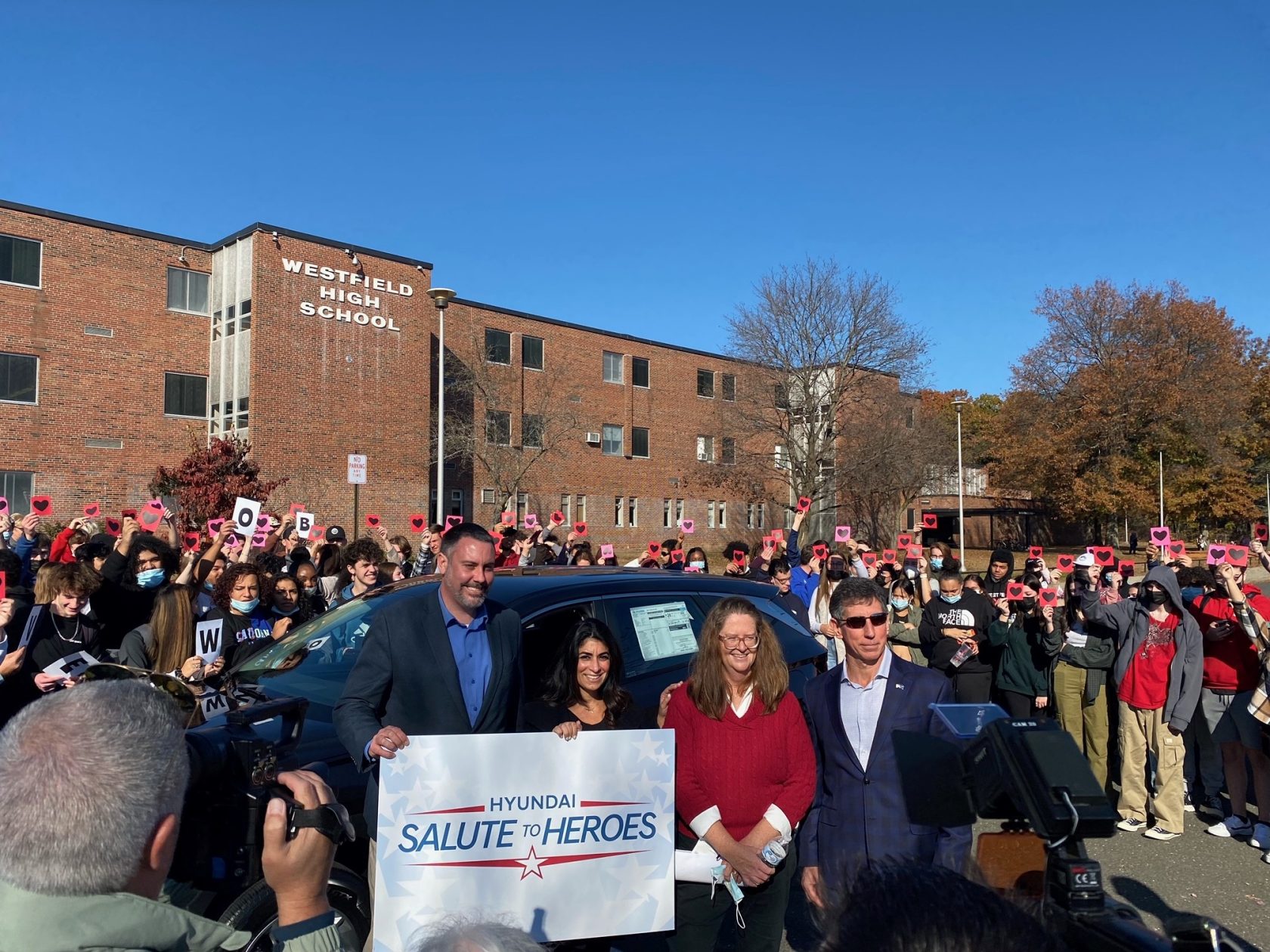 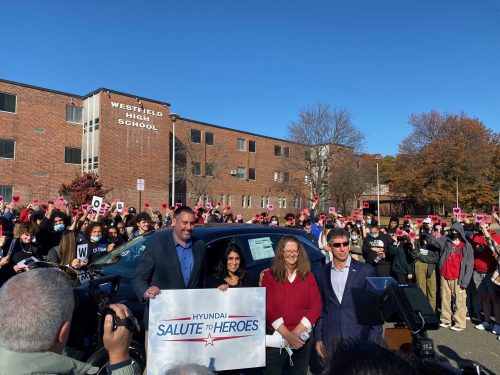 WESTFIELD — English teacher Kristen Biancuzzo’s past and present students, colleagues and friends poured out of Westfield High School on Nov. 8 to see their beloved teacher be recognized as an “Everyday Hero” by Western Massachusetts Hyundai dealerships, and presented with a 2022 Hyundai Tucson SE, valued at $29,000, in the Hyundai “Salute to Heroes” giveaway.

Biancuzzo’s name was selected from among 500 nominations of people who inspired others during the pandemic, helping them to get through the many challenges. She was nominated by fellow English teacher Jenna Gauthier for her extraordinary commitment to her students.

Gauthier said as soon as she saw the ad in the newspaper, she nominated her colleague.

“She is a teacher who never asks for anything, and she needed a car,” Gauthier said. Besides being in charge of The Westfield Promise early college program, Biancuzzo teaches three other classes, and dabbles in art, music and special education. “Her basket is full,” Gauthier said. 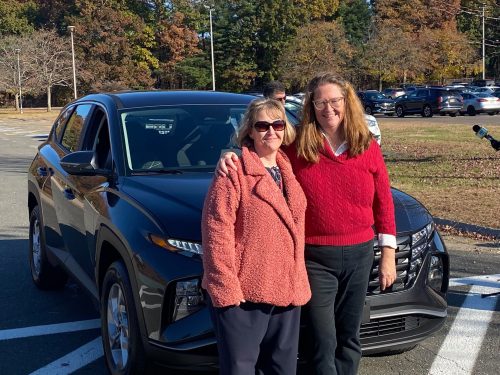 The Westfield Promise is co-taught by Biancuzzo and a professor at Westfield State University, and offers high schoolers the opportunity to earn 12 college credits before they graduate from WHS. While the program is open to any qualified student, priority is given to first-generation college students from demographic groups traditionally underrepresented in higher education.

Under Biancuzzo’s leadership, the program has a community service component, according to English-language arts supervisor Mary Keane. Her students have painted a mural on the Westfield Soup Kitchen building with art students, created a book of poems, and interviewed local people for a documentary about their community.

“She tries to make learning relevant to kids, to connect what they’re learning in the classroom to the community,” Keane said, adding that Biancuzzo is also committed to the educators around her, and oversees the new teacher mentoring program for the district. 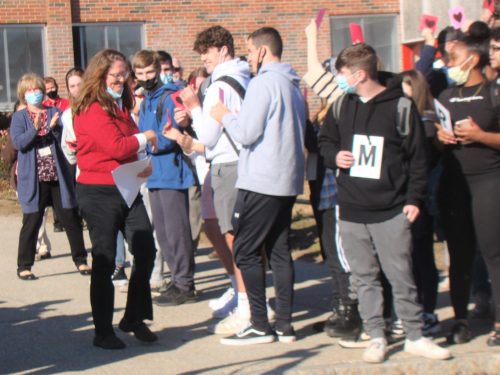 “All the work she does, she had 200,000 miles on her little car (fondly referred to as ‘Wendy Lou’), and had a need she didn’t recognize. She is a giver, not a taker,” Gauthier said. “The kids who came out today are those who have her as a teacher or who have had her in the past and adore her,” she added, saying it was a good show of love and caring.

Entries for the Hyundai giveaway were accepted Oct. 3-29, and the winner was chosen right before Biancuzzo’s husband unexpectedly passed away last week, adding a poignancy — and underlying the need — to Biancuzzo’s award.

Although not a factor in their decision, the Hyundai dealers who were present on Monday to present her the car were aware of what had happened. 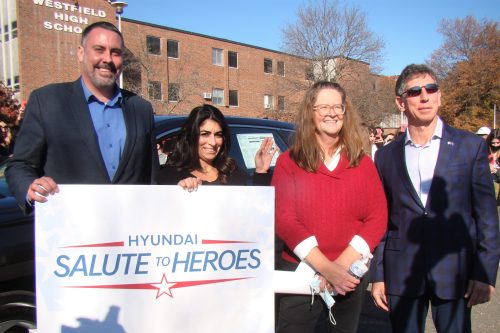 The judges, who included Gary Rome of Gary Rome Hyundai in Holyoke, Carla Cosenzi of Country Hyundai in Northampton and Brian Houser of Balise Hyundai in Springfield, said that choosing an awardee was extremely challenging, and told Biancuzzo that being selected from the 500 nominations was a testament to her worth.

“We’re so honored that Western Mass. Hyundai dealers get to recognize Kristen,” Gary Rome said, adding this is the first time the giveaway was held in Western Massachusetts. He said they wanted to make it a complete gift, and will be paying not only for the car but also for all the sales taxes and fees. “You just have to turn the key and drive,” Rome told her.

Biancuzzo then spoke, after first apologizing to her students for having her back to them while facing the television cameras.

“I really want to thank my students, staff and all the big people. I told my students at my husband’s funeral on Saturday that it’s time for us to do our work,” she said. 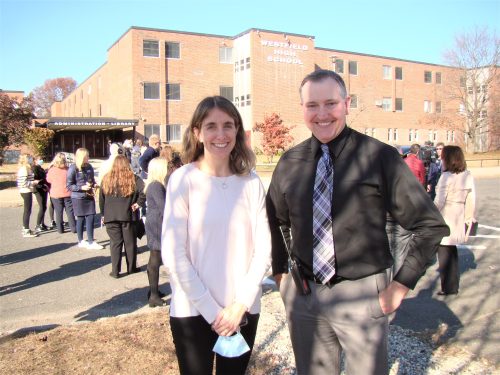 WHS ELA supervisor Mary Keane and Principal Charles Jendrysik joined the throng of well-wishers from throughout the district. “We describe her as a bright light,” Keane said about teacher Kristen Biancuzzo. (AMY PORTER/THE WESTFIELD NEWS)

“It’s time to stop using COVID as an excuse not to be human any more. Step up — my students did — and help your neighbors. Use this as an excuse to spread good news, instead of all the bad news,” Biancuzzo added.

“Kristen is remarkable. We describe her as a bright light,” Keane said after the ceremony. “I can’t think of a more deserving person. When we brought the kids together in the auditorium to tell them, there was joy and disbelief. They were just thrilled for her.”