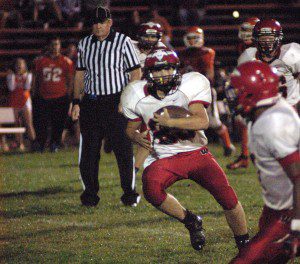 AGAWAM – The Westfield High School football team is winless no more.
Westfield bounced back from an 0-4 start in a big, big way by pummeling host Agawam, 51-14 Friday night.
Senior halfback Quinn Barbeito scored three touchdowns (two rushing, one receiving), quarterback Jake Toomey rushed for one touchdown and tossed another, and fullback Ben Geschwind ran in two TDs to lead the Westfield offense.
Bombers’ sophomore Cody Neidig made a 20-yard field goal late in the first half to give his team a 37-0 lead at halftime. Zachary Kuzon had an early fourth quarter touchdown run that made it 51-0.
Westfield jumped out to an early 14-0 lead in the first four minutes of the game, scoring on Toomey’s 63-yard run and a 29-yard rush from Geschwind.
Agawam put together a nice scoring drive trying to cut the lead in half, but Westfield cornerback Rashaun Rivers intercepted the ball.
In the second quarter, Barbeito scored on consecutive drives with TD runs of 1 and 42 yards. A 32-yard touchdown pass from Toomey to Barbeito made it 34-0.
Geschwind scored from 1-yard out in the third quarter, and Kuzon added a fourth quarter score.
Agawam scored twice on passing plays late in the fourth quarter.