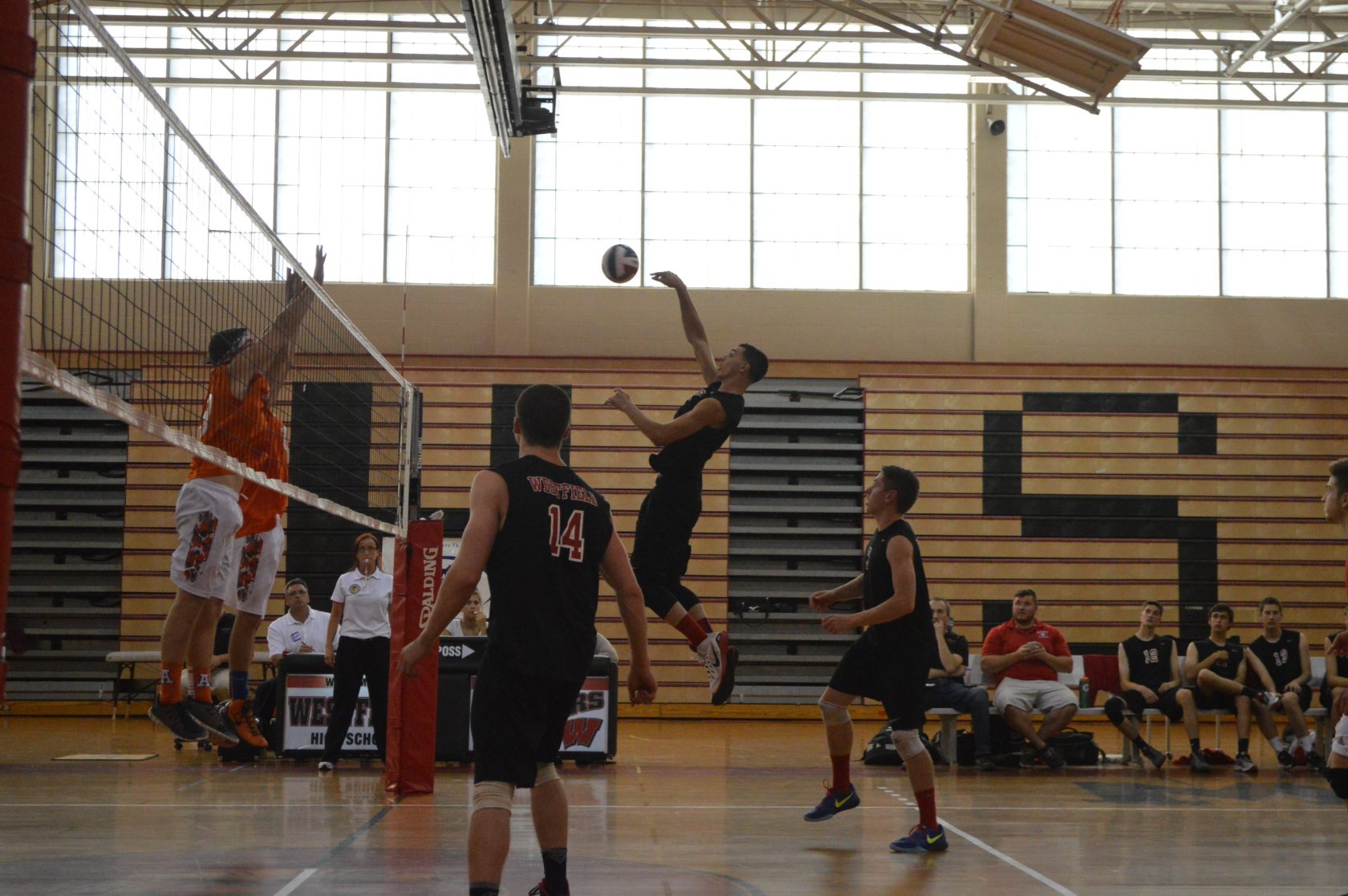 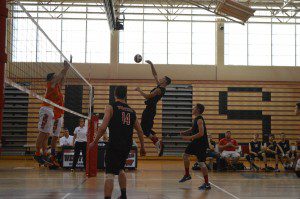 Manny Golob led the Bombers with 24 kills – the second time in the past three matches that the senior has surpassed the 20-kill mark. (Photo by Robby Veronesi)

WESTFIELD – After starting slow in its first tournament action Monday night, the Westfield boys’ volleyball team used early runs in three of the four sets in the Western Massachusetts Division I semifinals to make some history.
For the third time this season, the No. 2 Bombers fended off a pesky squad from No. 3 Agawam, 3-1 (25-18, 25-17, 18-25, 25-15) and, in doing so, earned the school its first championship appearance after appearing in four straight semifinals.
“I’m glad we finally broke through because the team deserves a shot at the championship,” said Westfield head coach Tyler Wingate. “We know we’re going to see a really good opponent (in the finals), so we got to clean up some things on our end. Its going to be a big challenge for us and a big stage, but we finally got over the step.”
For the 13th time this season, Westfield senior Manny Golob held at least a share of the team lead in kills, recording 24 in total to pace the Bombers. Fellow senior Ryan Bucko added 10 kills and Nick Hall had eight from his middle hitter position. Eric Shilyuk earned 45 assists, while libero Dmitriy Doroshenko manned the defense by digging 36 Brownie kill attempts.
The homestanding Bombers began the semifinal match on a hot streak, using an early 9-3 run to open play and force a quick Agawam timeout. After some back-and-forth play, Westfield used a similar 7-3 run midway through the first set and pulled out a 25-18 opening set victory. 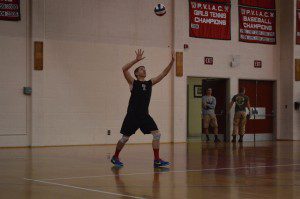 Eric Shilyuk once again led Westfield in assists, recording 45 against Agawam in the Division I semifinals Wednesday night. (Photo by Robby Veronesi)

“We know the opponent well and we know we have to come ready to play,” said Wingate. “We know we had to play a complete set and we did a pretty good job of that. Going forward, that’s going to be another important thing for us is maintaining consistent play, but we respect what (Agawam) does.”
Similar to play in the opening set, WHS jumped out to a 9-4 lead to start the second set, putting Agawam in a deficit early on. Seven different Bombers earned at least one kill Wednesday night, and that combined with consistent blocking on the front line helped diffuse any potential Agawam threats. Westfield took set two, 25-17, thanks to that early run.
Unforced errors plagued Westfield in the third set, fueling the visitors from AHS’ 10-2 run to jump out to a 14-7 lead. Despite Westfield’s near comebacks, Agawam utilized a final 8-2 run to close out the third set, 25-18, to force a fourth game for the third time this season.
The Bombers would turn it around in style, however, coming out of the huddle on another 9-3 run, thanks to consistent serving from Tyler Stanton and consistent energy from Isaiah Headley, who ended his final game in his home gymnasium with 12 digs, 5 kills and an assist. The bombardment continued throughout the fourth set, as additional runs of 7-3 and 5-1 later in the set helped hold back the Brownies and aided Westfield’s 25-15 match-clinching set win.
“We played a cleaner fourth set and played more to win,” said Wingate. “We were more on the offensive in game four and I really liked that. We’ve been preaching all season that if we take care of our side of the net and make subtle adjustments, we’ll be in a good spot.”
The Bombers will head to Holyoke Community College Monday night for the Division I championship at 6:30 p.m., when they will face the No. 1 Colts of Chicopee Comprehensive High School.