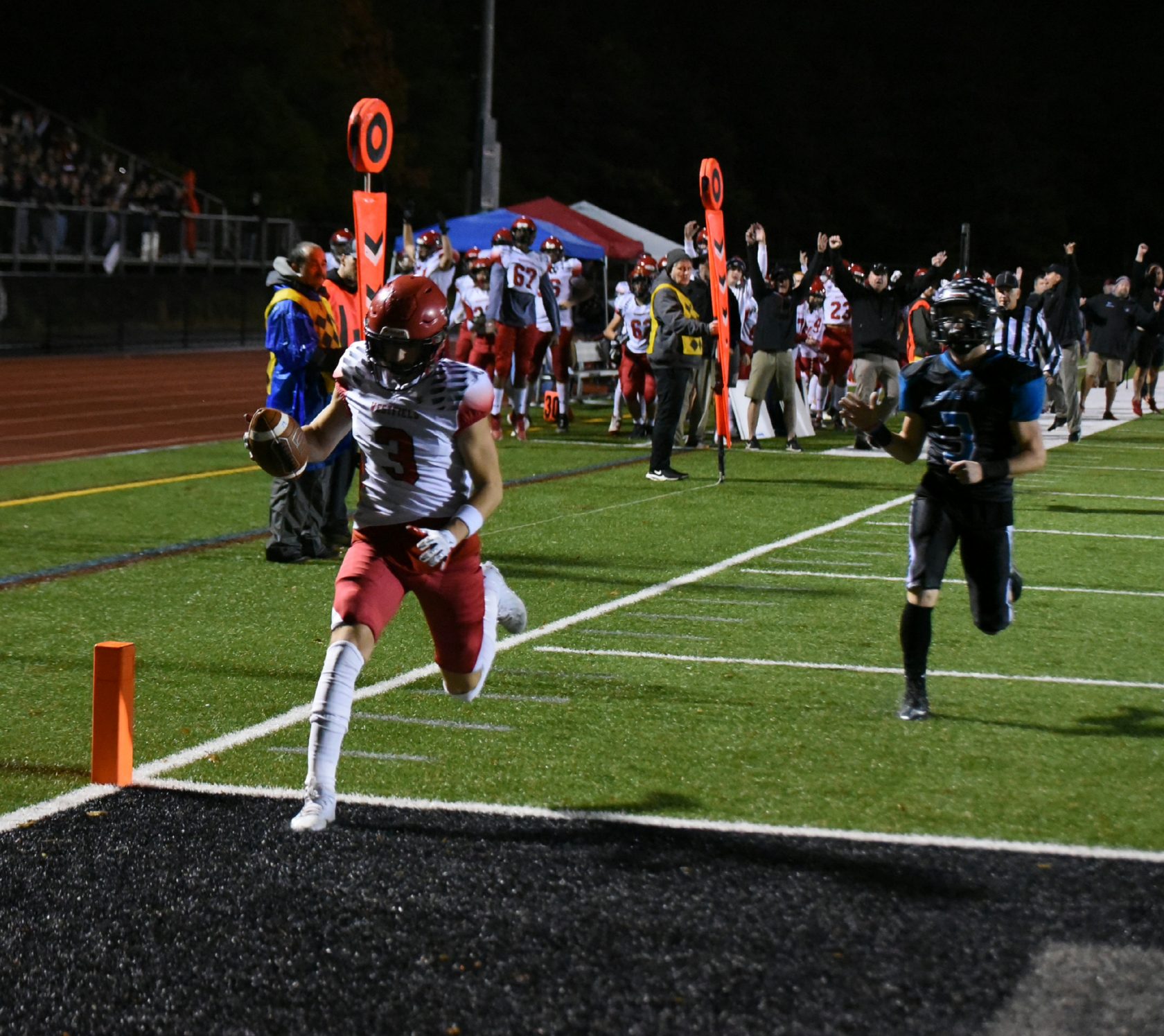 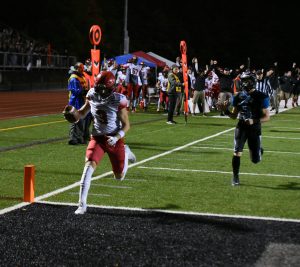 PLYMOUTH – Call them underdogs or mispronounce their name, one thing is still for certain – – the Westfield High School Bombers football team is Final Four bound.
No. 5 Westfield traveled nearly 300 miles round trip to defeat fourth-seeded Plymouth South, upending the Panthers on the road in a state Division 3 quarterfinal matchup Friday night, 21-6. The Bombers advance to the semifinals where they will take on the undefeated No. 1 seed Marblehead (9-0) Saturday at Shrewsbury High School. Kickoff is 3 p.m.
“We feel like we’ve been undervalued and underrated all year,” Westfield High School football head coach Rob Parent said. “That stuff lights a fire. I think our guys responded tonight.”
Westfield freshman quarterback Jaxson St. Pierre scored two touchdowns, rushing for one and throwing for another, and Bombers’ sophomore Tyreek Mejia returned a blocked punt for a touchdown. The Bombers (8-1) also gave the opposition a heavy dose of running backs Ryan Cimini and Kaevon Eddington.
“We just played our game – – we played Westfield football and we came out on top,” St. Pierre said. “We have the best defense in Western Mass.”
Westfield’s defensive unit raised the bar again, stifling the opposition from start to finish. The Bombers set the tone from the opening kickoff and the game was rarely ever in doubt.
Plymouth South (7-3) drove within a few yards of the red zone on its first two drives but Westfield defensive backs Ryan Cimini and Matt Collins each tipped away the ball on a key fourth down passing play to keep the Panthers out of the end zone.
Then, early in the second quarter, junior Michael Ritchie blocked a Plymouth South punt attempt, sophomore Tyreek Mejia scooped up the ball in mid-air, and raced to the end zone for a touchdown. With 8:17 remaining in the half, Westfield led 7-0.
“They gave us the look we thought we’d get; we went for it,” coach Parent said. “Ritchie made a great move on the inside, gets to the left foot of the kicker, gets the block and Tyreek was right there.”
Westfield’s defense stopped Plymouth South again on their next drive. The Bombers offense took over, quickly went to work and scored when St. Pierre scrambled 17 yards for a touchdown. The lead was now 14-0 with just under four minutes left in the half.
Plymouth South responded with a long kickoff return for touchdown, cutting Westfield’s lead nearly in half. The Panthers’ extra point attempt failed.
Westfield responded immediately following the second half kickoff. The Bombers started on their own 35-yard line. A short time later, St. Pierre found senior wide receiver Andrew Scott streaking down the right sideline untouched for a 31-yard touchdown completion. With kicker Ian Dixon’s third straight extra point, the lead was now 21-6 with 7:23 remaining in the third quarter.
In the fourth quarter, Westfield’s special teams unit allowed another big play – – this time a long punt return all the way to the Bombers’ 5-yard line but it did not matter.
Westfield’s defensive unit rose to meet yet another challenge like they have done all year, tightening up in the red zone, preventing a touchdown, and even forcing a fumble. Mejia jumped on the loose ball for the Bombers, securing another turnover.
“Tyreek was Johnny-on-the-spot twice tonight,” coach Parent said.
It was the second straight game that Mejia had a huge impact on the defensive side of the ball. Last week against Fitchburg, Mejia blocked a punt in the third quarter that set up an eventual game-winning touchdown drive.
“Our defense just makes plays when they need to be made,” St. Pierre said. According to St. Pierre, the Westfield fans, which included a frenzied student body section, also had a huge impact on the game’s final outcome.
“When they came through, the energy just went through the roof,” he said, referring to the home crowd’s late arrival to the game due to some sloppy weather throughout the afternoon. “Our fans play a big part in our game. I’m really happy they came.” 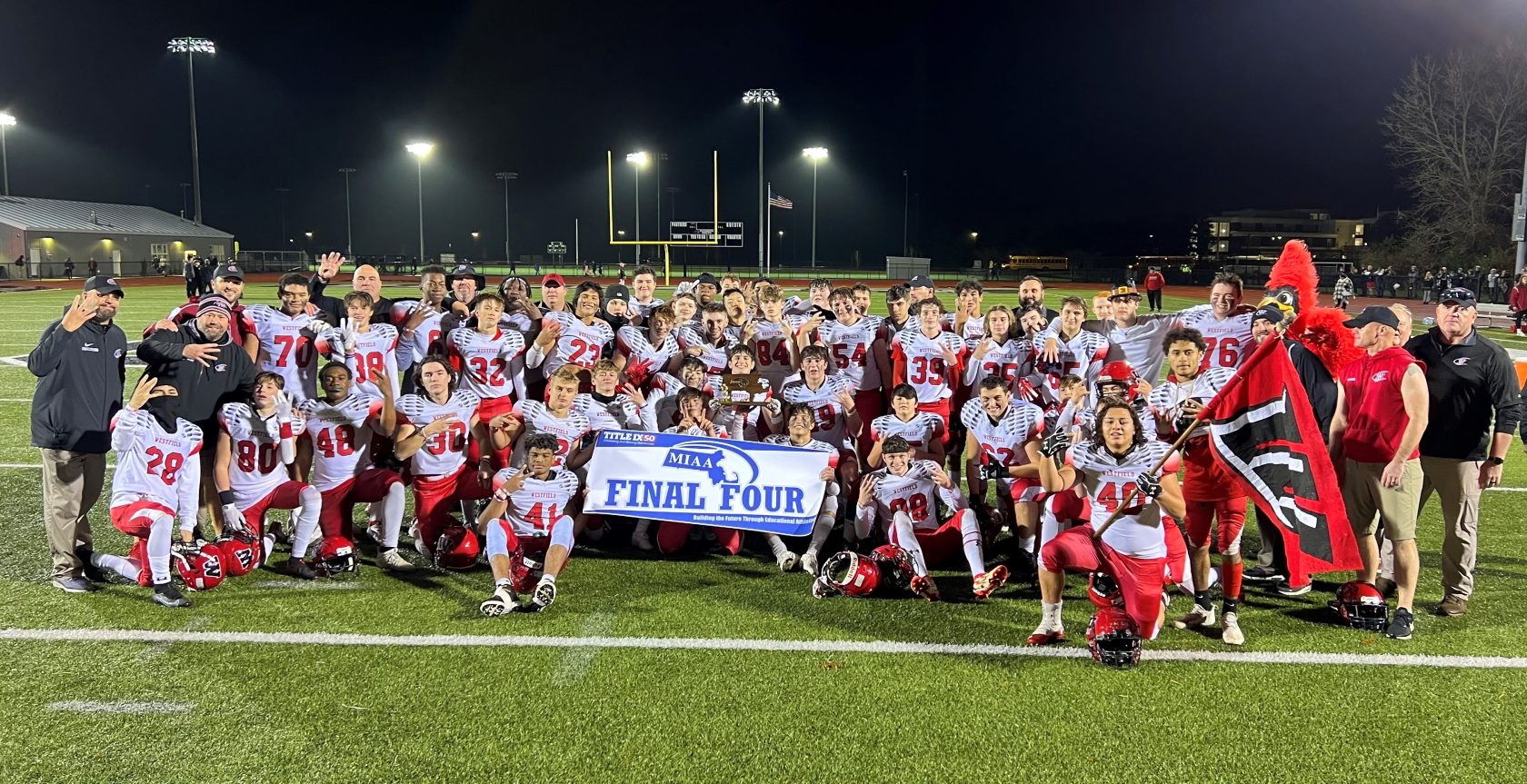