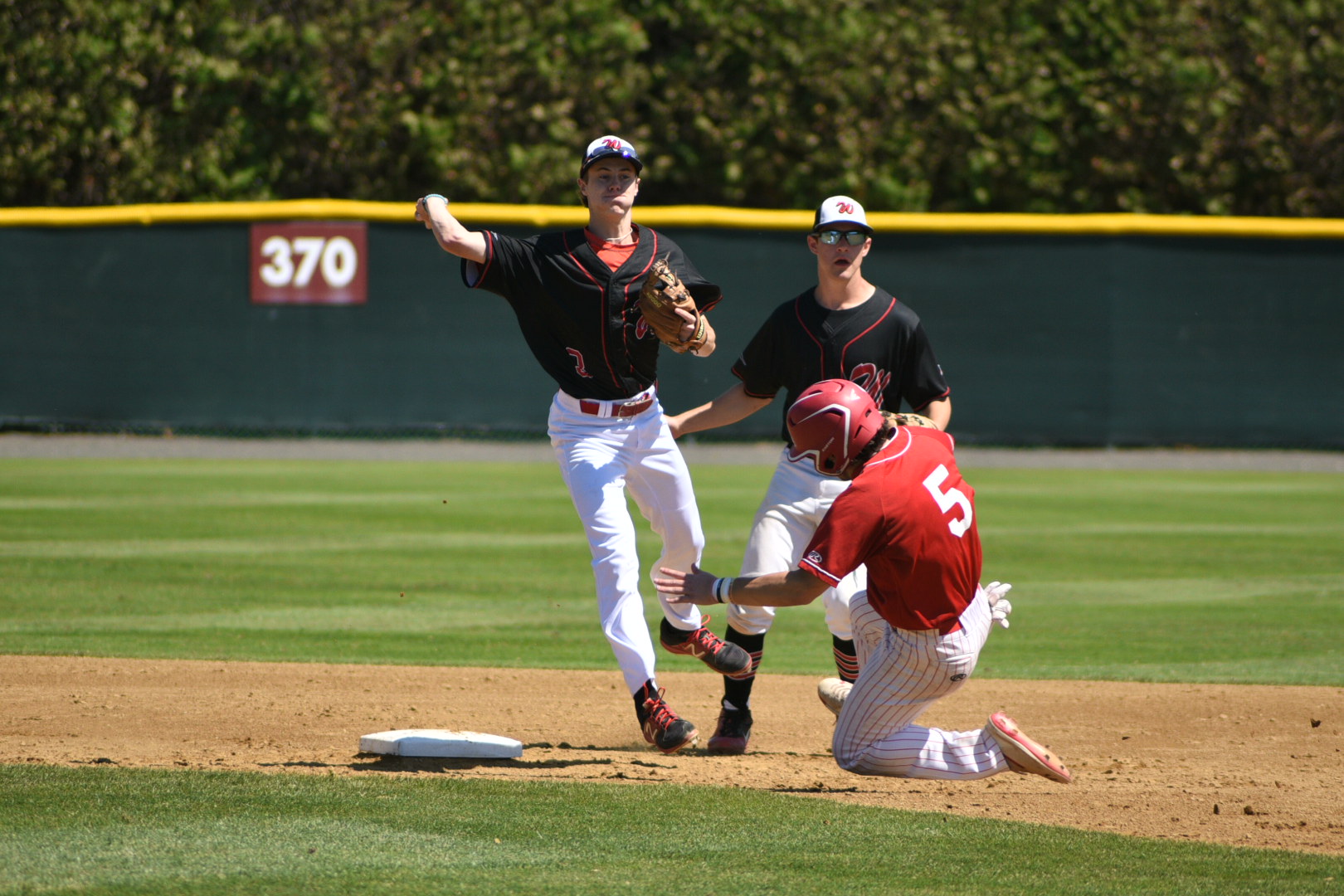 AMHERST – The Westfield Bombers baseball team will soar no more.
Westfield’s amazing 2019 run ended in the West Division 1 finals early Saturday as the third-seeded East Longmeadow Spartans prevailed 6-3 at the University of Massachusetts-Amherst.
“Coming from 5-5 to where we are today, I need not say anymore,” said Westfield High School baseball coach Mike Kennedy, whose Bombers finish the year 16-7. The top-seeded Bombers entered the championship, having won nine of their last 10 games.
“These guys fought their hearts out and played great baseball,” Kennedy said.
Both team’s starting pitchers appeared a bit shaky from the start but bad base running nullified the nerves. 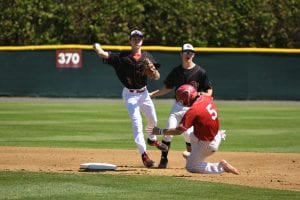 Westfield’s Jimmy Hagan makes the infield play against East Longmeadow in the West Division 1 championship early Saturday at the University of Massachusetts in Amherst. (Photo by Marc St. Onge)

East Longmeadow’s Mike Moynihan led off the game with a single off Westfield pitcher Brian Strange. The ball found its way through the left side, but the base runner was soon caught in a rundown. Chad Lavelle and Hunter Mazza followed with walks, but Strange recovered in time to force the Spartans into a ground out that resulted in a double play.
East Longmeadow pitcher Tim Krol plunked Westfield lead-off batter Baley Collier to begin the bottom of the first. Collier was subsequently caught in a rundown as well.
Another base runner reached for Westfield in the second when Strange drew a one-out walk. Strange managed to get into scoring position, stealing second base, but Krol struck out the next two batters to end the threat.
Westfield threatened yet again in the third when Paul Shibley reached on an error. Krol was bailed out again though. The next Bombers batter hit a short fly ball to third base. The East Longmeadow third baseman caught the ball and quickly fired to first base. The ball sailed by the bag, but the Spartans right fielder tracked it down and threw out Shibley at third.
Baley Collier and Mason Collingwood walked with two outs. Krol responded with a strikeout to end the inning.
East Longmeadow’s persistence – and patience – finally paid off in the fourth inning.
Lavelle led off with a single and stole second base. With two outs, Tim Krol drilled a run-scoring base hit up the middle. Zach Robidoux walked. Connor Birks followed with a two-run double to deep right center field. Run-scoring singles from Ryan Porth and Mike Moynihan off reliever Jimmy Hagan made it 5-0.
Westfield chipped away at the lead, battling back with two runs in the bottom of the fourth. Spencer Cloutier was hit by a pitch. Strange reached on an error. The Bombers finally cracked the goose egg on their end of the scoreboard, plating a runner on an error. Colin Scanlon followed with a single. A Shibley sac-fly RBI made it 5-2.
Westfield loaded the bases in the fifth inning before Krol struck out two batters to end the threat.
Things got a bit more interesting in the bottom of the seventh.
East Longmeadow reliever Joseph Baxter hit Hagan with a pitch. Spencer Cloutier singled. Strange was hit by pitch to load the bases. With two outs, Scanlon drew a run-scoring walk to pull within 6-3. Shibley was plunked to make it 6-4, but officials ruled that he did not make an attempt to get out of the way, sending him back to the plate. He flew out to end the game.
We didn’t capitalize on a lot (of things),” coach Kennedy explained, noting Westfield’s success getting a base runner on second in every inning but their failure to often get the runner home.
Despite the loss, coach Kennedy still focused on the positive after the game.
“We can continue the success of this program,” he said, pointing to a rich crop of talented players set to return next season.