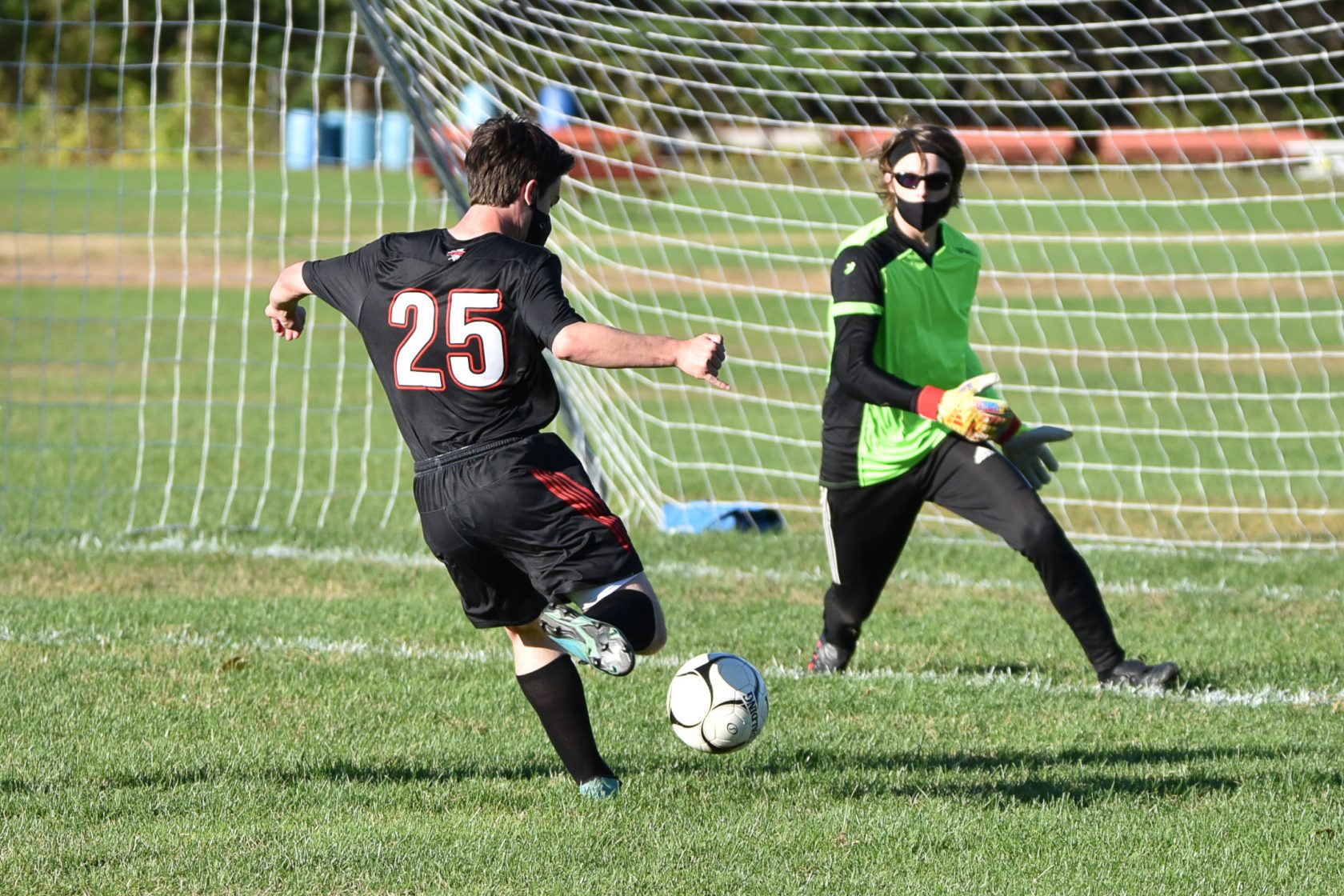 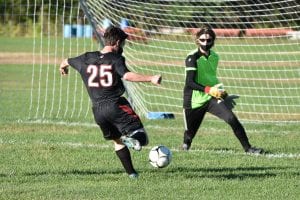 WESTFIELD – With no tournament season and a delayed start to the regular season due to coronavirus concerns, the race is on to post boys’ soccer’s best record over a five-week period.
Westfield High School took that to heart and has soared to unparalleled heights early on. On Thursday, the Bombers recorded their third straight win to begin the 2020 season with an 8-0 rout of visiting Holyoke.
“We wish we could play in a tournament situation but we’re trying to make it as competitive as we can,” Westfield High School boys soccer head coach Andrew Joseph said. “We want to win every game we play, train hard, and try to make the best of it.”
Westfield took full advantage of its opportunity in the first quarter, racing out to a 7-0 lead against Holyoke. The Bombers tacked on one more goal in the second quarter.
“Everything was clicking,” said Westfield’s Dom Rinaldi, who recorded a hat trick. “We were just doing the right things that we were practicing … and my shots were going in.”
Westfield’s T.J. Liquori had a hand in five goals, scoring twice and doling out three assists. Shea Byrnes, Jack Keeney, and Jack Fortier also scored for the Bombers.
Nichita Solopa, Jack DeMarinis, and Matthew Bowen each had an assist.
“I think we saw the writing on the wall that this was going to be the year,” coach Joseph said. “We are older, we have a lot of experience with almost every player coming back and we added TJ (Liquori) … one of the best players playing high school soccer at the moment.”
Liquori is a prep school transfer, who grew up playing youth soccer with his Bombers teammates. Together, with Rinaldi and a red-hot Fortier, who has dominated the field thus far this season, Westfield has really clicked offensively. The Bombers are 3-0.
“We are going to take it one game at a time,” Rinaldi said. “We just want to make a statement, show them who we are.”
Westfield has a big road test against West Springfield Oct. 13 at Clark Field before returning home Fri., Oct. 16 to face Agawam.
Said coach Joseph: “Those are big tests. We will see what we are made of then.”

Saints shutout results in third straight win
St. Mary’s 5, Pioneer Valley Chinese Immersion Charter School 0
St. Mary’s junior Ali Goodreau had two goals and two assists to lead the Saints’ offensive attack.
Freshman Emma Goodreau notched two goals as well for St. Mary’s, and stopper Macy Woodger, also a freshman, launched a missile into the back of the net from around 30 yards for her first varsity goal. Saints’ freshman Anna Puttick assisted on one goal to get her first varsity point. Eighth grader Eli Umana Kimura and senior Chloe Lussier each added an assist as well.
“We played fairly well today but I think there is another gear we can go to,” St. Mary’s girls soccer oach Pat Olearcek said. “Many of our players contributed some very solid moments today but there were times we let down a bit in our play. If we can play the full 80 minutes with full intensity I really think we can do some fun things. We are really young, as the average age is 14 years old, but we have some great kids who are trying hard to get better and with more experience it’s going to feel more and more natural to be out there. Our defense has been really stout and they were once again.”
St. Mary’s goalie Amelia Willenborg earned the shutout with five saves.
“We have a great goalie in Amelia … to make sure any hiccups don’t hurt us,” coach Olearcek said.

Wed., Oct. 7
GOLF
Tirrell, Bombers top Purple Knights
Westfield 155, Holyoke 189
David Tirrell shot a 37 at Tekoa Country Club as three Westfield golfers all finished in the 30s to turn back Holyoke.
Westfield’s Anthony Schabowski finished with a score of 38 and Joey Calderella had a 39. Andrew Florek shot a 41 for the Bombers.