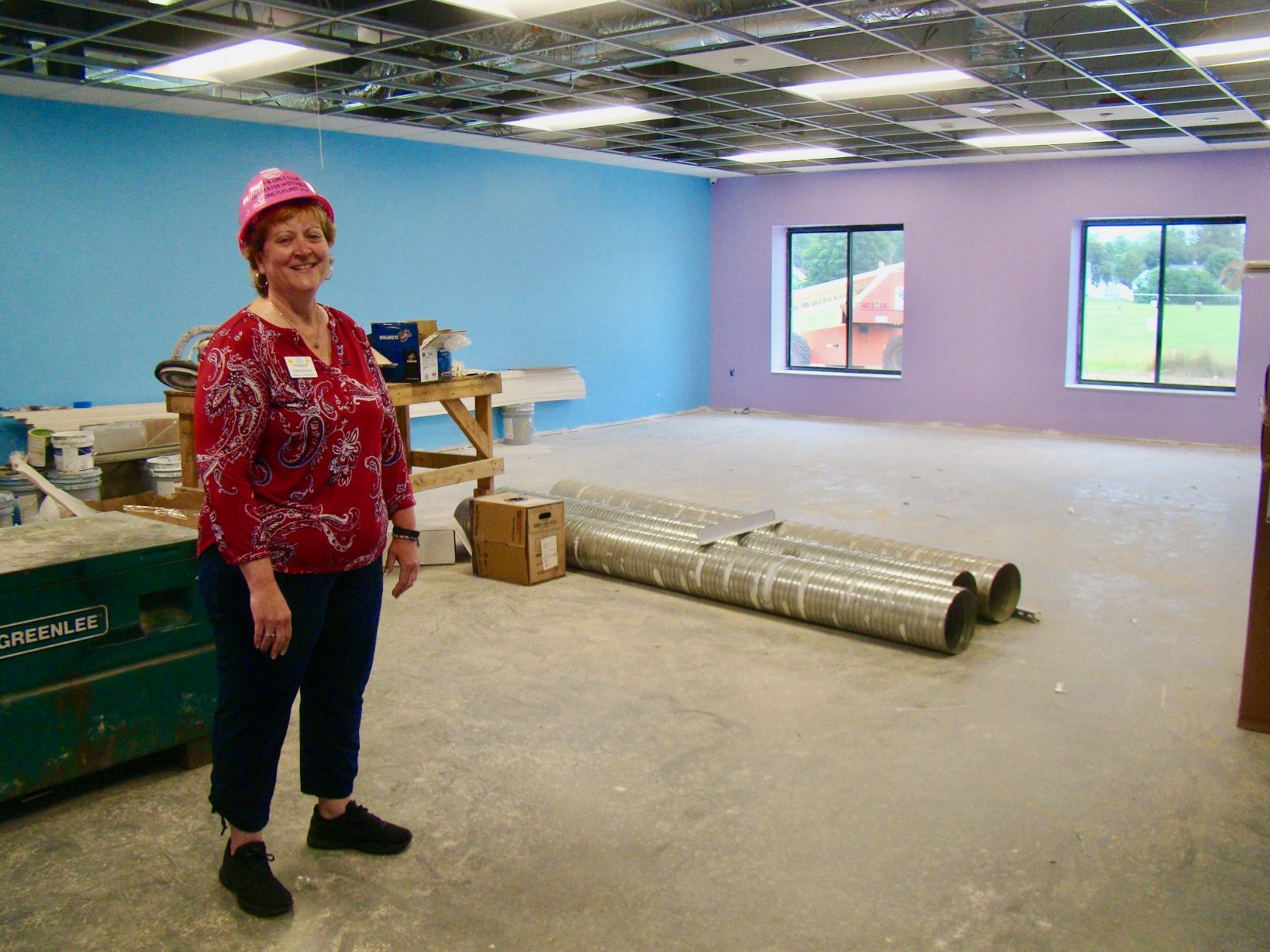 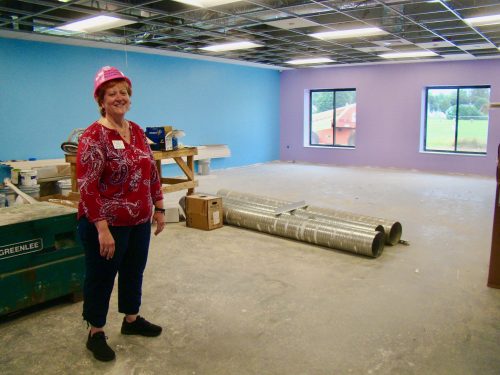 WESTFIELD – Boys & Girls Club of Greater Westfield Director of Operations Kellie Brown can often be seen this summer wearing a construction helmet along with her smile, as the Club’s 15,000 square-foot licensed childcare expansion continues full strength.

The new building will allow the Club to serve 100 additional children from pre-kindergarten to grades 3 or 4, increasing their total licensed childcare to 300 slots.

Daily progress is visible on the expansion, which broke ground on April 27 and is scheduled to open in the fall. The outdoor paving and concrete pads and sidewalks are in, the envelope of the building is up, electricity is in, and classrooms and bathrooms are being constructed under the supervision of One Development Construction, the contractor for the project, with Elm Electric doing the wiring of the building. 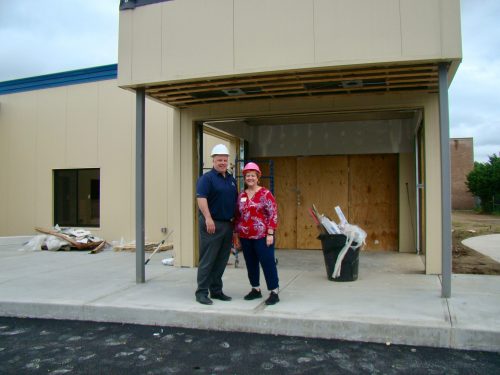 J. L. Raymaakers and Sons has also been a huge part of the process to date, said Brown, doing all the excavation work, blacktopping, paving, and playground areas. “They’ve been very instrumental with the build,” she said.

The entrance to the licensed child care will be at the other end of the new building where there will be a circular drive for drop off along with a check in area, meeting room for parents, and single stall bathrooms for the public. Brown said there will be security doors to the classroom areas.

Outside of the new entrance, a concrete sidewalk leads to the Amelia Park Children’s Museum. The skate park can be seen on the other side. 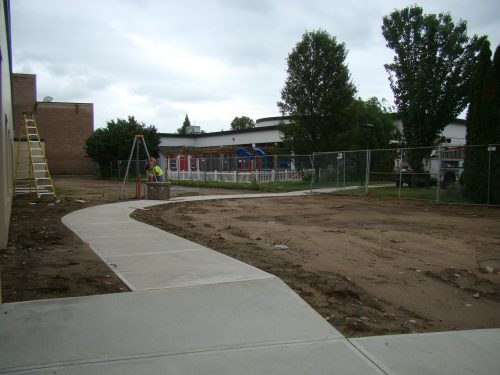 A concrete sidewalk has been poured from the entrance of the new addition to the Amelia Park Children’s Museum. (AMY PORTER/THE WESTFIELD NEWS)

Following Brown down the hallway from the main building, she’s tuned in to every wire on the floor and construction worker walking through, and can describe the finished building even as it’s going up. She said the project is on target to open on Aug. 30, with the only delays to date being production delays with manufacturers.

Brown’s new office will be one of the first upon entering the new building from the connector to the main building, where she will be situated with easy access to both. She said the courtyard between the two buildings will be paved plus grass for outdoor play options.

Some of the features Brown points to include the classrooms for kindergarten and before and after school, and the first prekindergarten area for the Club. There are sinks in every room and bathrooms attached to every room, and bottle filling bubblers in the hallways. 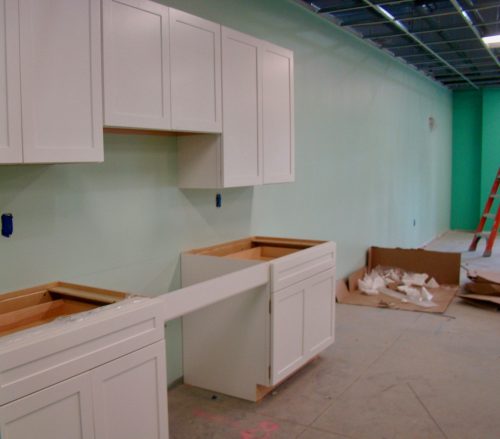 There will be sinks in every classroom. (AMY PORTER/THE WESTFIELD NEWS)

The new building will be sheetrocked inside, as opposed to the concrete blocks in the main building, which Brown said is safer for the younger children

Other features include a huge storage room in the preK room, which has two sinks and a bathroom accessible from both the classroom and the pre-school playground, if the children are outdoors.

Outside there is a large concrete pad for play next to the spot for the preschool playscape, which is coming. An after-school playscape will be installed right next to it, separated by a fence. 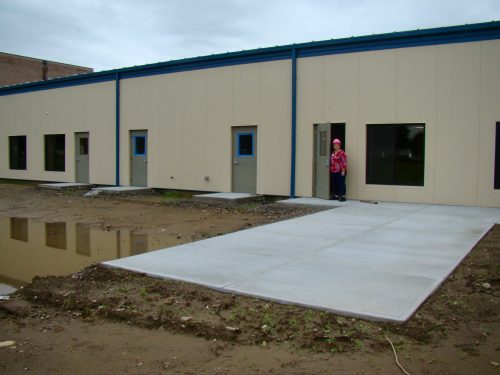 Outside the preK classroom is a large concrete pad play area, next to which will be installed a new preschool playscape and after school playscape. (AMY PORTER/THE WESTFIELD NEWS)

Indoors, there will also be a large gross motor play room for indoor play in the new building.

A lot of the design has been impacted by COVID-19, with enhanced safety and sanitary measures. The building itself had to be expanded from its original design as the pandemic changed the square footage requirement per child from 35 sq. ft. to 42 sq. ft. Since the rules relaxed, the requirement changed back, but Brown said the extra space is good for them.

Chief Advancement Officer Bo Sullivan said the Boys & Girls Club is two-thirds of the way to its fundraising goal for the $3.5 million expansion, having raised $2.6 million to date, including $84,000 from their recent golf tournament. In between now and their half marathon on September 11, Sullivan said there will be a lot of face to face meetings. “We will be asking everybody,” he said.

Donations are welcome at any time. To get more construction updates, find out about ongoing and future programs, or to make a donation, go to bgcwestfield.org, or call 413-562-2301.