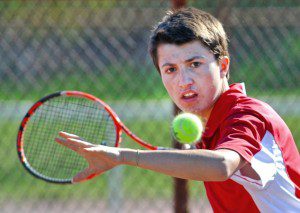 LONGMEADOW – Westfield senior boys’ tennis player, Loeiz Briand, fought his way to the top over the course of the last week only to lose in the final round of play Sunday.
Briand ousted Longmeadow’s Peter Kelley (6-0, 6-0), Belchertown’s Kevin Lindhult (6-0, 6-1), and Lee’s Tanner Devarennes (3-0, injury default) in the round of 16. The Bombers’ top singles player even managed to fight off Mount Greylock’s Rohan Shastri, the tournament’s top seed and the region’s top-ranked amateur in 2012, in the finals before losing 6-4, 6-0.
In the first set of the final match, Briand and Shastri held serve. Both players then broke serve to remain tied 2-2. Shastri broke serve to take a 3-2 lead, but Briand reciprocated for a 3-3 tie. Shastri took the next two points, the first of both players to do so which proved critical. Briand reclaimed a point, down 5-4, but that was it.
“Loeiz kept up the intense pressure the whole time,” Westfield coach John Morizio said. “it was an exciting battle – a lot of people watched – and a very high level of play.”