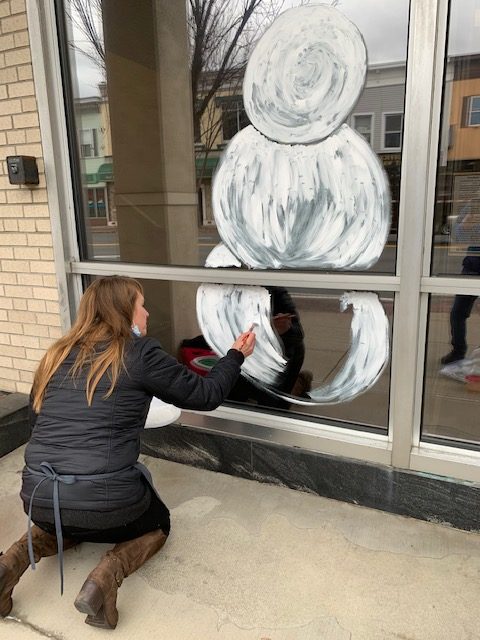 WESTFIELD-Downtown businesses are participating in a new project this holiday season – A Window Wonderland – which came to fruition after ArtWorks of Westfield Inc. member Tom Sawyer shared a childhood memory during a recent Zoom meeting.

“When I was in grade school it was an annual Halloween activity in my town, Auburn, Maine,” said Sawyer, noting he originally proposed the idea of painting the windows of downtown businesses for PumpkinFest. “The idea didn’t get off the ground for Pumpkinfest but then it morphed into this version when we were brainstorming.” Artworks of Westfield member Tom Sawyer takes a break from his painting on a window at Westfield Bank on Nov. 25. The project is part of A Window Wonderland program slated Dec. 12-13. (SHANNON CHIBA PHOTO)

Sawyer noted he participated in the window painting project with tempera paint in his hometown for several years and is encouraged by the “tremendous response” he has received from downtown merchants and businesses about the new endeavor.

The family friendly holiday art event is slated Dec. 12 and 13 from 11 a.m. – 3 p.m. along Elm Street. Participants are asked to sign up for a window to decorate by visiting the Artworks of Westfield Facebook page or at ArtWorksWestfield.com.

Shannon Chiba, who is spearheading the project, said at press time there are 22 merchant windows – with some of those windows having multiple panes.

“We have room for many folks to paint,” she said, adding that local artists including Sarah Kinne, Kathleen Hillman and herself will be working with budding artists to paint the windows with holiday themed scenes.

“Our team works great together and we will help spread art and joy with the help of the residents of Westfield,” said Chiba, adding, “Any local artists who are willing to help out are encouraged to participate and can contact us via our Facebook page.”

Chiba said after hearing Sawyer explain how that simple concept had a profound impact on him, she knew the project felt right for Westfield. 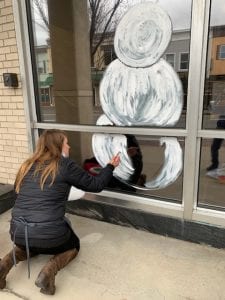 Artworks of Westfield member Shannon Chiba paints a snowman on the window at Westfield Bank on Nov. 25 as part of A Window Wonderland art project. (SUBMITTED PHOTO)

“Tom became more engaged in the arts and it was a wonderful addition to his hometown,” said Chiba, adding, “Tom wanted to bring this idea to our town.”

Andrew Surprise, a former city councilor and Artworks of Westfield member, is also passionate about this project working with businesses downtown.

“Andrew saw the value in this concept and has been speaking with local merchants,” said Chiba. “He began asking if we could paint their windows. We still have room for more painters and windows to be added.”

“If anyone wants us to paint their windows downtown, contact us,” said Chiba.

Chiba noted that guidance to painting will be provided to those who seek it.

“Some preliminary designs will be painted on participating merchants’ windows to paint-in, but folks may also benefit from the snowflake tutorial and painting demo that will be offered at the gazebo on the green,” said Chiba, noting the gazebo windows will be decorated with fun snowflakes.

Chiba said Kinne “loves snowflakes” as they create a mandala effect which are “easy and soothing to paint.” 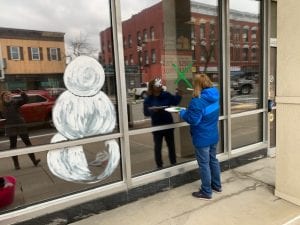 “She looks forward to showing folks how fun painting them can be,” said Chiba.

Chiba added that a tent will be set up to distribute paint on paper palettes.

“All you need is a face mask, brush and paper towels for cleanup,” said Chiba, noting tempera paint is washable with water.

“We will have music, and we will all be meeting in front of Circuit Coffee for 11 a.m.,” said Chiba. “Folks can go to the green for instruction, or they can get their window assignments and start painting. Window assignments will be first come, first served. You get your choice of windows!”

Chiba said the event is being conducted for two days to allow for social distancing among participants.

“We want to be sure that we space out participants and still allow anyone who hasn’t finished to come back if they need to,” she said. “We imagine some folks may just walk-up and want to paint, so we will have a few extra brushes on-hand.”

Chiba explained this is a “very large project,” and Artworks members “hope to make it a true wonderland of winter design.” 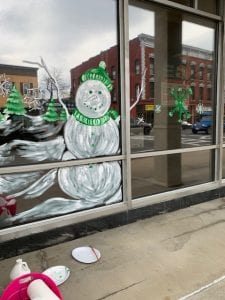 “Just over five years ago on Nov. 7, 2015 the idea of a Westfield-based, community centric arts and cultural organization was hatched,” said Westerlind. “Five years later, A Window Wonderland demonstrates the sustainability of the concept and the passion of our team members to serve and engage our community and all the creative folks in Westfield and the surrounding communities.”

Westerlind noted that the window painting project “came to life” in less than two weeks, driven by the creativity, talent and teamwork of board members and volunteers.

“A Window Wonderland will provide the opportunity for our community to come together in a safe and engaging environment during one of the most joyous times of the year,” he said.

“This whole project warms our hearts,” she said. “We hope to see everyone painting and having a good, safe time.”