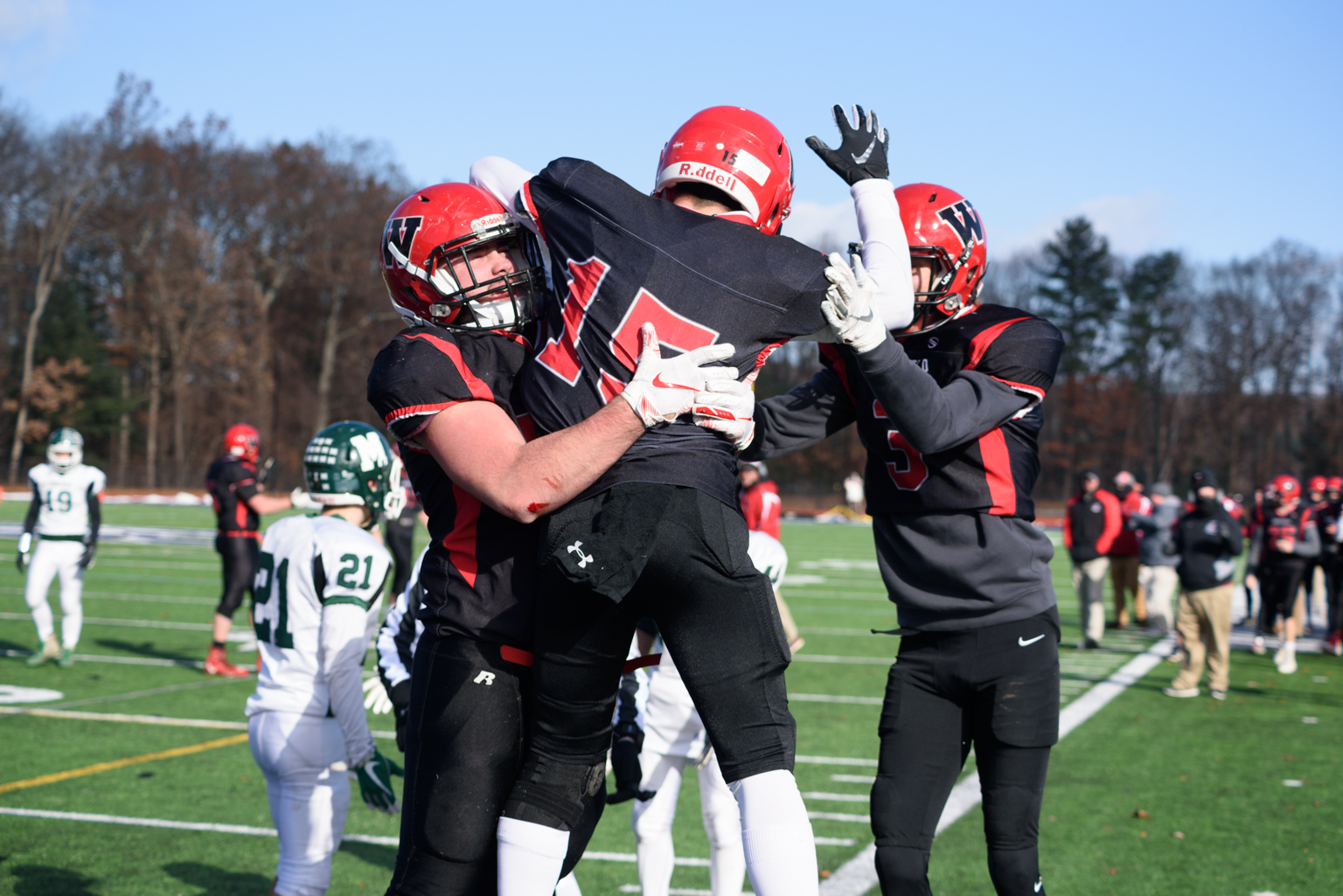 WESTFIELD – In 2015, the Westfield High School football team waved a tearful goodbye to the longstanding tradition of playing Cathedral on Thanksgiving Day.
One year later in 2016, Westfield, despite the lack of a true holiday classic, made some noise, soaring to a West Sectional title under the direction of senior quarterback Austin St. Pierre.
In 2017, Westfield would welcome a new holiday dance partner, entering into a new partnership for turkey day with Minnechaug Regional High School. The Bombers traveled several miles east to Wilbraham, but it was just inches that separated the two teams as the Falcons came away with the narrowest of victories, 19-18.
Minnechaug sophomore quarterback Anthony Izzo fueled the victory with a pair of second-half touchdowns. Westfield had a couple of chances late, failing to convert on fourth-and-inches, and fumbling away a final opportunity. 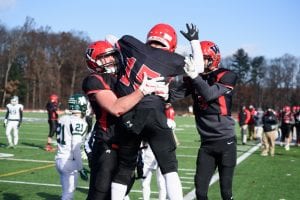 The Westfield Bombers celebrated a season sweep of the Minnechaug Falcons with a 2018 Thanksgiving Day victory. The two teams will renew their rivalry again when they collide in the 3rd annual holiday classic Thursday in Wilbraham at 10 a.m. (Staff File Photo)

Westfield rebounded in a big way last season with senior quarterback Mike Nihill flourishing in head coach Rob Parent’s system. The Bombers defeated the Minnechaug Falcons 27-6 in the West Division 3 semifinals (before falling to the Central Eagles 22-0 in the title game) and froze out the Falcons on a brutally cold Thanksgiving morning 27-18 behind a three-touchdown performance from Nihill.
The tables were turned once again this season.
On Nov. 8, Minnechaug countered with a sterling game from Izzo, now a senior, and fellow senior wideout Alex Henry in the D2 semifinals. The two connected on an early touchdown pass with Henry backpedaling into the corner of the end zone to complete the play, and the Falcons cruised to a 28-0 shutout.
While Minnechaug fell in the championship game, losing to Central 40-7, Westfield rebounded with a 28-8 drubbing of Holyoke (their second win over the Purple Knights this season) in the “consolation” round. 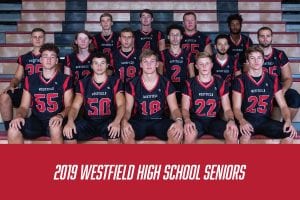 “There’s definitely some tension with us beating them last year and them beating us this year,” coach Parent said. “Thanksgiving Day football is a tradition amongst itself, but with two teams that have had to battle each other to win a championship the last two years definitely adds something to the game.”
Westfield and Minnechaug will renew their short-lived yet budding rivalry when the two sides come together again for the third annual Thanksgiving Day contest with bragging rights and a holiday series lead at stake. The 6-4 Bombers travel to Wilbraham to take on the 8-2 Falcons Thursday at 10 a.m.
“I’m hoping that our guys play with a chip on their shoulders and attack this game harder than the playoff game,” coach Parent said. “I hope our guys execute plays … and we wind up on the right side of the scoreboard.”
Senior leadership should not be a problem Thursday as 15 seniors are set to take the field for Westfield.
“This senior class one is of the most winningest classes that I’ve had regardless of the outcome of this game,” coach Parent said, noting the senior class’s accomplishments in having earned two Western Mass. final trips and one west sectional championship over the course of the last four years.
“The season is not over,” coach Parent said. “A fourth straight seven-win season or better season is something these kids haven’t seen for decades. …We’re playing for a lot here.” 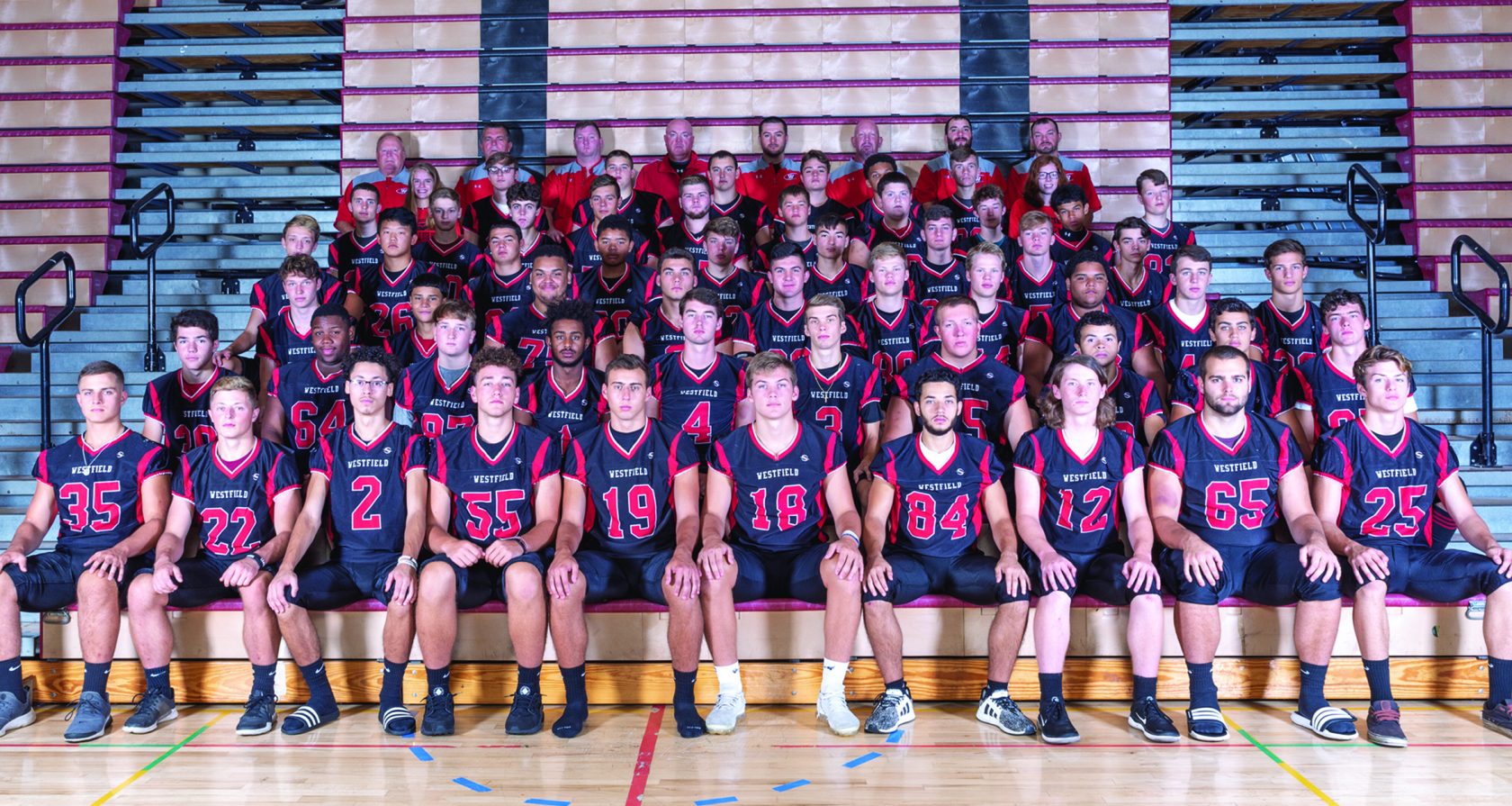