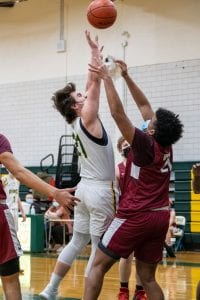 SOUTHWICK – In the second game of a doubleheader at Southwick, the Sabis Bulldogs used a fast paced offense to run past the host Rams in a boys basketball game Monday night, 63-38.

Both teams started off the game playing excellent defense with Sabis creeping out to a 6-2 lead. The Bulldogs then went on a 14-2 run the rest of the opening quarter to lead 20-5.

Sabis forced a fast pace in the second quarter, leading to multiple Southwick miscues and fouls. The Bulldogs outscored the Rams, 16-10, giving them a 36-15 halftime lead.

The fast pace continued into the third quarter.

Sabis was gunning from all over the court, making three 3-pointers in the quarter.  Five different Southwick players scored in the quarter, but the visiting Bulldogs ran out to a 57-25 lead going into the final stanza.

Southwick regrouped and mounted a charge of their own in the fourth quarter, outscoring Sabis, 13-6.  Jordan Drzyzga, Liam Poole, and Brennen Vinesett all made three-pointers for the Rams in the fourth. 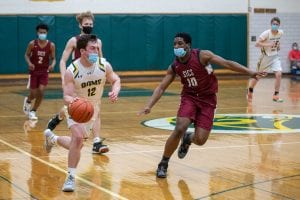 Nate Goodwin (12) brings up the ball and looks over his options. (BILL DEREN PHOTO) 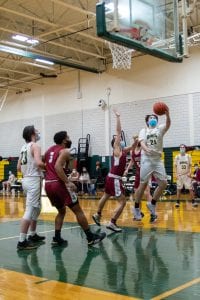 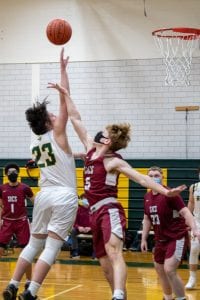 free throw line, making 13 of 16.  Nine different Rams scored in the game, led by Vinesett with nine points, including a pair of three-pointers. Leighton Billings and Liam Poole added 8 and 5, respectively. A total of 10 Bulldogs contributed with points. Senior Tre Hodge led the effort with 15, followed by Sidney Borges and Alex Williams with 10 each.