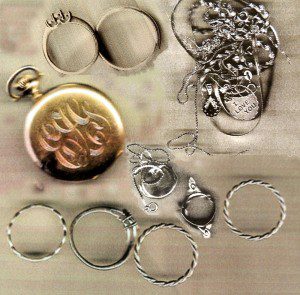 City detectives have recovered jewelry including that seen (not to scale) in the composite image above and believe the items were stolen by a pair of burglars who have been apprehended. Any resident who recognizes any of the pieces is urged to call the detective bureau at 572-6400 to identify their stolen property.

WESTFIELD – City detectives have had significant success this year clearing more than 30 burglaries and recently found success in a different avenue toward limiting burglary in the city when they arrested a fence who had purchased some jewelry stolen by a pair of recently discovered thieves.
Detectives routinely visit pawn brokers and jewelry stores in search of stolen property and examine the records dealers are required to keep to document their purchases. Dealers must keep a record of each purchase, including a copy of the seller’s identification, and must hold a purchased item for ten days before reselling the piece.
However, during an investigation into the crimes of a pair of burglars who had been apprehended, the two thieves who admitted to breaking into nine houses in the city said that stolen jewelry had been sold at Gold Deposit, a kiosk in the Holyoke Mall where detectives had examined records without finding a trace of the stolen jewelry they were looking for.
Det. Brian Freeman reports that when the two suspects were interviewed they said that although they were able to trade items such as a stolen Kindle device and a stolen handgun directly for heroin, much of the stolen jewelry was sold at the Gold Deposit where the proprietor, Anthony Windoloski, 25, of 97 McKinstry Ave., Chicopee, was particularly helpful.
In a document filed in Westfield District Court in support of a criminal complaint against Windoloski, Freeman states that one of the thieves told him that the proprietor of the Gold Deposit told them “that they would get caught if they kept using their real ID’s (sic) and told them to use someone else’s.”
The burglary suspect said the man also gave them advice about what to steal to garner the best cash return and offered to meet them in the parking lot “if they ever had items they did not want to bring into the mall because of the security cameras.”
The suspect went on to explain that, after getting advice from the gold dealer, his accomplice found a driver’s license and they started using that.
The license was issued to a 5 foot eight inch tall, 60-year-old heavy set balding man with a Slavic surname but Windoloski accepted it from the two tall, slim burglary suspects in their 20s.
Freeman said that when he asked Windoloski how he could accept such a card as proof of identity from the two young men the man said “I never look at the IDs.”
Freeman said that not examining identification is not the only thing that Windoloski does not do.
“Windoloski does not keep good records, he has no filing system and usually does not date the transactions until a few days later,” Freeman wrote.
Freeman said that he knew he had seen the name on the card the burglars had used in previous examinations of Windoloski’s papers, which he said Windoloski keeps loose in a drawer, so he returned when he learned of the link between the bogus ID card and his suspects.
Freeman found some records he had seen before but also found some he had not seen but should have.
He said that Windoloski said that he had found those unseen papers at his home and returned them to his business.
In those papers, Freeman said, he found a record of a sale of three gold charms which one of the burglary victims was particularly anxious to recover.
However, because he had not seen the records when he first looked at the record of items Windoloski had purchased, they had been disposed of and were beyond recovery.
He said that not only did Windoloski’s actions prevent him from recovering the stolen charms, the untimely records also preventing him from stopping the suspects’ string of burglaries sooner.
He said that, had Windoloski insisted on valid identification from the burglary suspects, he would have identified them sooner and thus taken them out of circulation sooner, preventing at least four house breaks in which the value of the property stolen was almost $15,000.
Windoloski was arrested with the assistance of Holyoke police and charged with two counts of receiving stolen property valued more than $250, two counts of being an accessory after the fact, conspiracy to commit a crime and obstruction of justice.
He was arraigned in Westfield District Court before Judge Rita S. Koenigs and was released on his personal recognizance pending an Oct. 3 hearing.
Freeman said that he knows the suspects must have stolen from more residents than they have admitted to since some of the jewelry that they sold to Windoloski has not been claimed by any of the known victims.
“At least two houses which were broken into by these guys were never reported,” Freeman said.
He suggested that the victims may believe that their property was stolen by a visiting friend or relative and have refrained from reporting their loss because of embarrassment or loyalty.
Freeman urges all residents who have suffered a loss to report the theft since there is a possibility that their property can be recovered and, if a victim can be found, additional charges can be levied against the suspects.