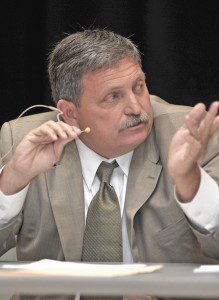 SOUTHWICK – If Joe Deedy gets his way, the carnival – and fireworks – will go on.
Deedy, a selectman, Rotarian and owner of Moolicious Ice Cream, told the Parks and Recreation Commission last night that he has a plan to keep the town’s summer traditions going.
The carnival, normally organized by the Southwick Fireman’s Association, was canceled this year and the fireworks budget was cut to $1,800. Deedy admitted to the commission last night that he was the driving force behind the cuts, but he had a way to make it happen.
Parks and Rec. Chairman Kelly Magni said late last month he was determined to have the fireworks, but he wasn’t sure how or where since the school campus was not available. 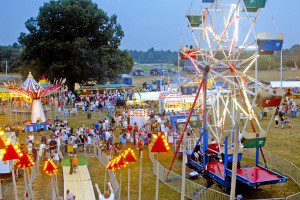 Last year’s carnival, located on the grounds of the Powder Mill Middle School in Southwick. (File photo by Frederick Gore)

After a story broke in The Westfield News about the situation, residents, business owners and the Southwick Police Association have come forward with donations for fireworks. Deedy took that a step further and approached a carnival company to run a three-day event July 25-27. He told the commission that he hoped the fireworks could take place July 25, a family-friendly band could perform in the Southwick Recreation Center July 26, and the Rotary’s Grillin Daze was already set for July 27. Having the carnival on the grounds of the Recreation Center would be an added attraction.

“I went to the Rec. Center today, and it’s small, but they could have some rides,” Deedy said.
Deedy said while the carnival he’s working on would not be as large as in past years, it would continue the 60-plus-year tradition.
“We’re gonna have a carnival this year,” said a determined Deedy.
Deedy said he spoke to Southwick Police Chief David Ricardi for an estimate of how much it would cost to have police at the event.
“He said it was in the range of $1,400-$1,800,” said Deedy. “I reached out to the fire chief because in year’s past they had a line item that covered police for the carnival and parade, so I asked if they would put that $1,800 toward the cost of police for a carnival since it’s a community event.”
Deedy assured the commission that they would not need to pay any cost associated with the carnival beyond the purchase of fireworks.
Deedy also partnered with The Westfield News to generate donations through an advertising campaign in the newspaper beginning in early July. Deedy is also collecting donations at Moolicious, and suggested that the Board of Selectmen make a $500 donation from its gift fund.
“We need to raise at least $8,000 for fireworks,” he said.
Magni said there were two options for shooting the fireworks, including the motocross pits at the American Legion and Whalley Park. He and fellow commissioner Susan Grabowski agreed – along with Deedy – that Whalley Park was higher ground and would be the better location but the park would remain closed.
Magni said people could see the fireworks from the Recreation Center, as well as the school parking lots.
The commission did not have a quorum at its meeting yesterday and could not take any action on the discussion but both the present members were on board with Deedy’s plan.
The commission is set to meet again next Tuesday. Anyone wishing to make a donation to the fireworks should contact the Parks and Rec. Commission. 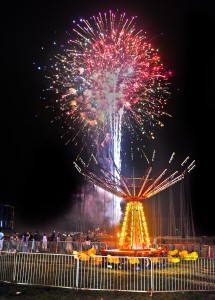 If Joe Deedy gets his way, the carnival – and fireworks – will go on.
Deedy, a selectman, Rotarian and owner of Moolicious Ice Cream, told the Parks and Recreation Commission last night that he has a plan to keep the town’s summer traditions going. (File photo by Frederick Gore)