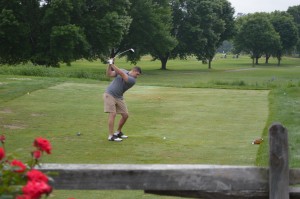 About 64 firefighters came out to Tekoa Country Club yesterday. The participants vary in competition experience – some have played since the inception of the tournament. (Photo by Robby Veronesi)

WESTFIELD – Red Sox and Yankees. Celtics and Lakers. Bruins and Canadians. Patriots and Jets. This area has its fair share of traditional rivalries that span decades, but there’s one local rivalry on the fairway that has lasted almost half a century.
The beginning of the work week looked a bit overcast, but the sun soon broke over Tekoa Country Club, making it a perfect day for a round on the Westfield links. Monday marked the 49th meeting between the Westfield and Holyoke Fire Departments, a friendly golf rivalry that started in the 1960s and has been competitive ever since. 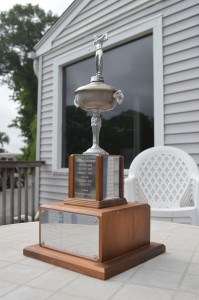 The Westfield and Holyoke Fire Departments have been playing for this trophy for 49 years, with Holyoke holding a 24-18=6 advantage. Westfield has won five of the last six years, however. (Robby Veronesi)

“It started years ago by a couple of guys from each department,” said Andy Hart, a member of the Westfield Fire Department. “They got together and said ‘Hey, let’s play a tournament.’ It’s been going strong since.”
Members from the two bordering city’s departments squared off in a match-play format, similar to several PGA competitions. Throughout its history, this series has stayed pretty even. Holyoke leads the all-time series 24-18, with six ties.
In the 1980s, Holyoke took a commanding edge, winning 9 of 11 matches from 1980 to 1990, including seven straight from 1981 to 1987. In recent years, Westfield has narrowed the gap considerably, winning five of the last six match-ups beginning in 2008.
Despite the trophy given to the winner, the day is mainly reserved for some quality leisure time for these hard-working servicemen and women – a chance to get out and have some fun with some good friends.
“There’s about 64 of us today and it’s a great time,” said Hart. “Some guys have been here since day one. It’s just a real fun tournament and it’s a nice chance for the departments to work together and play together. We get along really well and have made some really good friendships over the years doing this.”