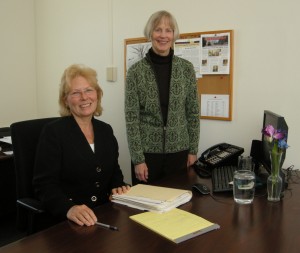 Sue West, the new CEO of the Carson Center for Human Services, sits in her new office with the outgoing CEO, Kathleen Damon, as she makes the transition to her new duties. (Photo by Carl E. Hartdegen)

WESTFIELD – Kathleen E. Damon went to work as the program director of Westfield Area Mental Health Clinic on March 18, 1991, and after only 21 years, is retiring as CEO of Carson Center for Human Services.
Damon’s supervision of the agency she oversaw for decades started to come to an end on March 19, 2012, one day after her 21st anniversary at the Carson Center, when her replacement started work.
The name of the organization is only one of the changes Damon has seen during her tenure in Westfield, she said, and pointed out that the organization has grown over the years, in large part by merging with other local agencies that needed administrative support.
“That’s a way”, she said, “of keeping locally based programs under local control” which she said is important because “community input makes a difference in programming.”
Well known programs such as Kamp for Kids and Camp Togowauk stayed under local control when their parent organization, Abilities Unlimite,d merged with the Carson Center.
Damon said that the Carson Center’s services diversified when other programs, less well-known locally, such as the Center for Traumatic Brain Injury Services, which began at Western Massachusetts Hospital, and Valley Human Services, based in the Palmer and Ware area, merged with the center. She said all benefited from retained local control, with administrative support provided by the center.
Damon said that, not only does the Carson Center administer more programs now than  when she started work at the Westfield Area Mental Health Clinic, the center is serving more clients in its core behavioral health programs than she dealt with when she started.
She said that about 4,500 person are served annually now and said “I can remember years when it was two thousand or twenty-five hundred, so we are serving a lot more people than we used to.”
But the philosophy of the Carson Center has not changed and, although the leadership will be new, the center will continue to pursue the strategic plan developed by the board of directors – to ensure access to high quality services delivered by well qualified staff, while retaining fiscal stability.
Sue West, the new Carson Center CEO, said she came to Westfield from Poughkeepsie, N.Y. where she had been president of Family Services, an agency with a mission to “help families and individuals help themselves through direct services, collaboration and advocacy.”
West, who earned a master’s degree in social work from Columbia University, said “I started out my career doing straight up clinical social work and moved into administration.  I was drawn in over time to that role.”
“Kathy is a hard act to follow” she said.  “My focus will be on ensuring that we’re taking the best care of our staff as we possibly can, so they can be there for the people who need them.
“Kathy has built an incredible team of clinicians and mangers” and, with a board of directors comprised of “dedicated volunteers” West said “together we’re going to continue Kathy’s legacy of high quality service, continue to improve access and continue to utilize improved practices.”
She also said that the center will keep up with new modalities, as treatment evolves and deals with the changing realities of the clients served.
Damon said that, for example, many of the clients served deal both with substance abuse and mental health issues and said “the theory on this has changed over the years.” She said “There was a time when they sort of said ‘You got to get the substance abuse under control before you can deal with the mental health issue’ and that’s not really the way it’s looked at it any more. They do get looked at in parallel, in tandem … and I think the services have improved and are more effective than they used to be.”
Damon said that, because of the prevalence of chemical dependency issues, the center has increased training in that area for staff so they are better able to serve their clients.
West pointed out that the center deals with clients from “the whole gamut of income” although Damon said “our major mission has been to provide services for low-income people.”
West said that the current economic landscape also increases the need for the center’s services as unemployment and low-income “increases people’s use, often, of substances and increased depression.” She said that with financial stress “domestic violence often increases, children’s acting out (increases), children end up with more needs so the whole family gets impacted.”
“The work has been laid out, the resources are there” West said, but added that work always has to be done to expand the resources available to continue to meet the needs of the clients served.
She, and Damon, said that the big challenge for the leader of a non-profit organization such as the Carson Center is to balance the effort to provide services with the never-ending need to manage the fiscal issues on which delivery of services depends.
She said that is the primary challenge of not-for-profit agencies such as the Carson Center.
“You’re running a ‘business’ with … more accountability (than is) required from a for-profit business because we do receive and are responsible for taxpayer’s money” so the challenge is to run the business well “while keeping our eye on the fact that the reason we’re here is to be compassionate human services providers.”