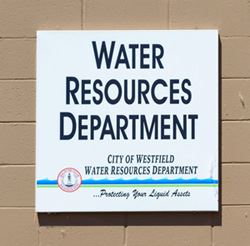 WESTFIELD – The City of Wesfield Water Resource Department has posted a video created by CDM Smith called “Troubled Waters: The Fight Against PFAS,” which features the city’s efforts to clean its water. CDM Smith is an industry leader in researching and combating PFAS contamination, and has been working with the city to design the Granular Activated Carbon filtration system for its wells.
The video speaks about the sources of per- and poly-fluoroalkyl (PFAS) substances, and the concern of the impact of the man-made compounds on the environment, in groundwater and in the human circulatory system.
“We’re finding them in polar bear fat, we’re finding them in drinking water wells, and we need to understand what sort of environmental health concerns are associated with them, and how to deal with those,” says Dina Drennen, Environmental Research Scientist at CDM Smith.
Also quoted is Dr. Charles Schaefer, a leading researcher in the treatment of perfluorinated compounds, and director of CDM Smith’s Bellevue Research and Testing Laboratory outside of Seattle, WA, who has been studying PFAS for the past eight years. The Laboratory does a lot of bench scale testing on a small scale to discover new remediation technologies that would be cost prohibitive on a large scale.
Describing real world applications, the video states that experts in the Bellevue Research and Testing Laboratory have been working hand in hand with the City of Westfield’s Department of Public Works, where the ground has been broken for a new treatment plant for Wells 7 & 8.
DPW Director David Billips is interviewed about the discovery of the contaminants in the water, and the city’s response. CDM Smith did the testing to make sure the treatment solution was going to work before launching into it.
“We felt it was our responsibility to remove whatever we found to a non-detect level,” Billips is quoted as saying.
With the plan in place, CDM Smith is helping Westfield to design the new water treatment facility that features granular activated carbon.
A link to the 16-minute video is currently available on the home page at www.cityofwestfield.org.