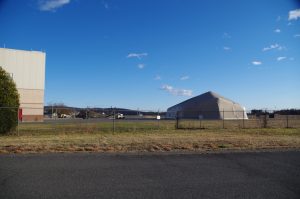 A helicopter is towed out of a hangar at Barnes Air National Guard Base on Nov. 23. (MICHAEL BALLWAY/THE WESTFIELD NEWS)

“What I hope is that this makes the DOD move on PFAS,” Mello said this week. “Now we have the ATSDR, it’s a federal agency, saying this link is real.”

Mello, a resident of Westfield’s North Side and an activist on the topic of per- and polyfluoroalkyl substance (PFAS) pollution in the neighborhoods surrounding Westfield Barnes Airport, said the Department of Defense has funds for environmental restoration, and need to add Westfield to its program. She said the DOD can also apply ARARs to Westfield, or “applicable or relevant and appropriate requirements” — meaning that stricter Massachusetts standards for environmental cleanup would be followed, rather than federal rules.

She said the findings of the study by the Centers of Disease Control and Prevention and the ATSDR, or Agency for Toxic Substances and Disease Registry, are not unexpected: Residents of Westfield who drank North Side tap water before 2016 have elevated levels of PFAS in their bloodstreams. She said the bluntness of the language is.

“To be so frank about it was not my expectation,” she said. “Having the statistics in the full report was new, and having them say it flat out, ‘This PFAS [environmental assessment] has demonstrated that past exposures to PFAS in drinking water have impacted the levels of PFAS in people’s bodies,’ that’s a huge statement. … This is a call to action.”

The Department of Defense should help with the resulting medical bills, she added. Veterans receive “presumptive care” funding when the armed services acknowledge that they had been placed in hazardous conditions. Neighbors whose water was contaminated by Department of Defense actions need the same consideration, Mello said.

“This exposure will end up costing the insurance companies and MassHealth, eventually,” she said. “I know the DOD knew that PFAS was toxic [since] 1973.”

Mello is a city councilor, but was speaking in her role as the director of WRAFT, Westfield Residents Advocating for Themselves, a group dedicated to educating neighbors and mitigating the effects of PFAS contamination in the city.

The 2019 study, the results of which were published this month, found that residents of Westfield’s North Side have blood levels of at least one form of PFAS about 3.4 times higher than the national average, and that drinking water contamination is the likely source. It also found that older residents were more likely to carry higher levels of PFAS contamination than younger residents; men more than women; and women who had never breastfed more than women who had.

Mello said the individuals who participated in the study received reports about their own test results, but WRAFT had to wait until this month for the full picture.

“I’ve been waiting for this report for a while,” she said this week. “I’ve been dying to see this, because I wanted to know what the range was of these chemicals in the participants. We knew what the average was, but we didn’t know the rest of the statistics.”

Mello said people curious about their PFAS exposure can sign up for a UMass-Amherst study of the effects of PFAS on the COVID-19 vaccine. Participants in the study must be Massachusetts residents and must not have received a booster shot. Those who have only received one full dose (including the second shot, for two-shot vaccines) are eligible for the study. In addition to helping the study, participants will receive their own test results, which will include information on PFAS levels in their blood. Signups are being taken at www.masspfas-covstudy.org. Mello added that anyone who needs help signing up can contact her for more information, at [email protected]

Most people in the United States have been exposed to some PFAS, the report says. Once PFAS enters the body, the contamination remains for years or decades. Scientists are still studying the health effects of PFAS contamination, which has been linked to high cholesterol, decreased vaccine effectiveness, higher risks of kidney and testicular cancer, and decreases in birth weights. The report notes that PFAS can be found in several sources, including stain-resistant carpeting and water-resistant clothing, cosmetics, non-stick cookware, and food packaging materials, as well as in produce, fish and meat from places where the water is contaminated with PFAS.

For the elevated levels found on Westfield’s North Side, however, the report zeroes in on aqueous film forming foam, or AFFF, a substance used in firefighter training at Barnes Air National Guard Base, possibly as early as the 1970s. The foam, which contains PFAS, is thought to have run off into the groundwater, contaminating public water supply wells 7 and 8, off East Mountain Road.

“Those wells are literally at the end of the runway,” Mello said.

She said the PFAS contamination has also traveled down the aquifer and brooks of northern Westfield, including Pond Brook, contaminating Well 1 on Union Street and Well 2 on Holyoke Road. Well 2 currently has a temporary filter system; the city is building a combined filtration plant on Dry Bridge Road to serve both wells 1 and 2.

After the contamination was first discovered in 2013, wells 7 and 8 were closed in late 2015 and early 2016, though they have since reopened with filtration systems in place. According to the report, PFAS contamination only been found in the four wells north of the Westfield River, not any water supplies south of the river.

“At this time, ATSDR does not recommend community members who get drinking water from the city of Westfield’s public water system to use alternative sources of water,” the study states.

The Westfield study represents one of 10 communities near military bases that were studied for PFAS. Residents from randomly chosen households north of the river in Westfield were invited to participate in the study, with 459 people from 247 households participating. Each participant filled out an exposure history questionnaire, and most gave blood and urine samples. The agency also collected tap water and dust samples from 17 randomly selected homes.