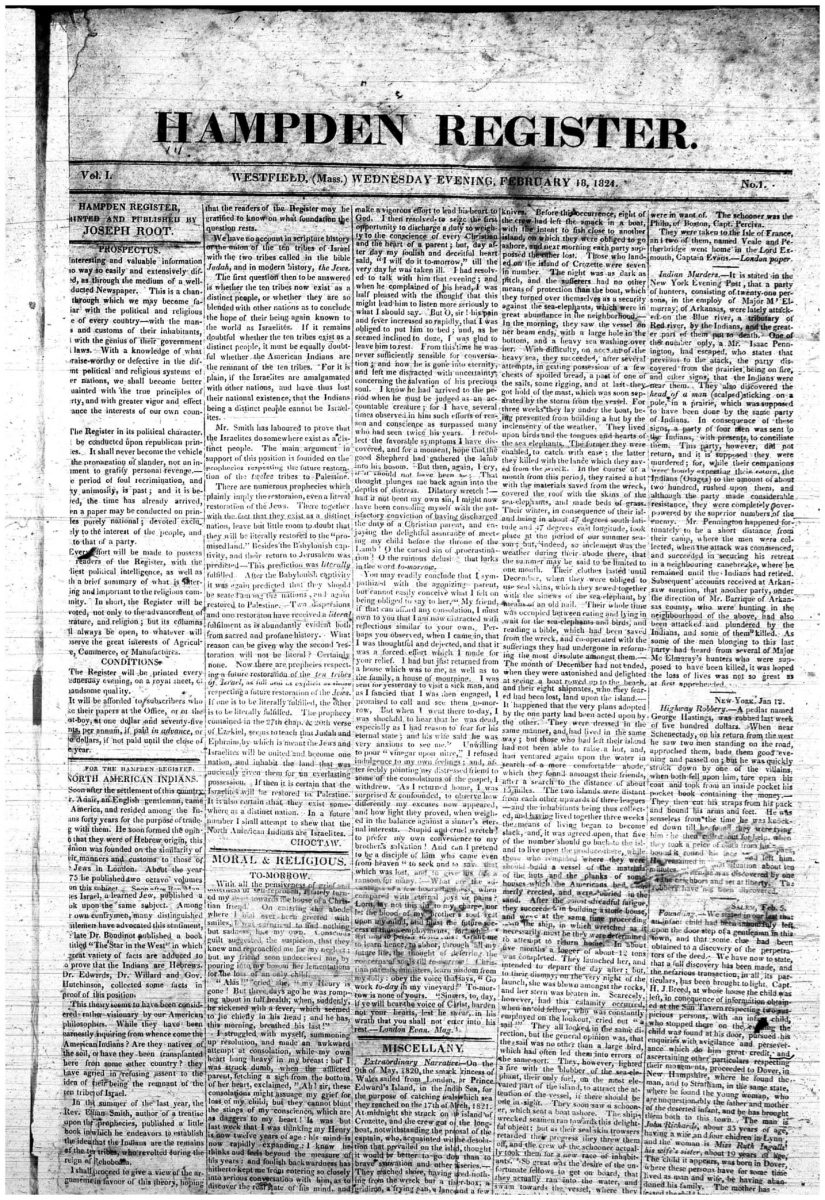 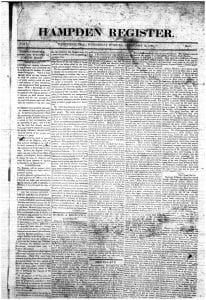 The front page of the very first edition of The Hampden Register. The lack of pictures made for a layout that relied strictly on columns of words, something that is almost never done in newspapers anymore. (Photo courtesy of the Westfield Athenaeum)

WESTFIELD- For those who read this paper every day, it’s probably rather easy to take for granted the process through which it got to your hands so you can see what is happening in your community. The reporters find the story, write the story, upload it to our website, and our multi-media manager puts the stories and pictures together as you see it each day. He then sends it out to be mass printed, after which the papers are delivered to our office and subsequently, your homes.

The City of Westfield did not always have the luxury of being able to read the news, let alone being able to read it every day. For 155 years of this city’s history, there was no newspaper that served Westfield. On February 18th, 1824, 195 years ago, that changed with the founding of The Hampden Register.

The first news publication in Westfield was founded by a man named Joseph Root. There are some aspects of The Hampden Register that are quite different than the product that we put out today. The earliest example of a camera had only been invented just eight years before and was not yet at the stage where images could be put in a newspaper. As a result, it seems to have been organized in a way that maximized the number of words that could be put on a single page. We know this because The Westfield Athenaeum has kept microfilm records of most newspapers throughout Westfield’s history.

The paper at the time was also a weekly publication, a far cry from the daily, and in some cases hourly, news production seen today. The printing capabilities of the time limited how often an edition of the paper could be mass produced, so it was some time before the news was being sent out every day.

An article from The Hampden Register that discusses the state of immigrants entering Westfield after they had arrived in New York. (Photo courtesy of the Westfield Athenaeum)

There are also some instances, however, in which the politics discussed in the paper are eerily similar to some issues at hand today. One such article, with the headline: Foreign Paupers, discusses the arrivals of new immigrants to Westfield.

“Innumerable complaints made by our citizens on the subject of the wretched state in which most of the foreign emigrants who daily arrive here, are found, in regard to food, clothing, and the means of subsistence, and representing the conduct of our municipal authorities, who have the disposal of the affairs of pauperism, for the neglect manifested by them towards these miserable beings,” read the article’s lead.

Between the founding of The Hampden Register Joseph Root and today, Westfield’s newspapers have come in many forms under many different owners. The Valley Echo dominated the news business from 1885 to 1923. The Westfield Valley Herald took the role from 1926 to 1942 and had the honor of covering the governorship of Westfield native, Joseph B. Ely. 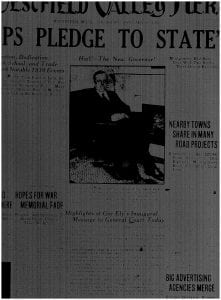 The edition of The Westfield Valley Herald on the day that Massachusetts Governor Joseph Ely was sworn in. The manner in which the image was preserve on microfilm made it difficult to read and scan. (Photo courtesy of the Westfield Athenaeum)

Today, however, most Westfield residents know their local news source as The Westfield News or The Westfield Evening News. It was first founded as such in 1972 and, as you can probably tell, still exists to this day. In 2011, the paper as we know it was purchased by Patrick Berry, who spent much of his childhood in Westfield and knows the city well.

“I am honored to be the latest manager of Westfield’s community media,” said Patrick Berry. “It is sad that communities don’t value their local news like they had for decades and centuries,” Berry continued as he reflected on other community news media that have closed down.

When faced with an uncertain future, Berry went on to say, “In an age where news from around the globe can be consumed easier than ever, what is happening in our local communities is what affects us most and that’s the news people are now less likely to support. They would rather believe what someone stranger said on social media than take a professional journalist’s report.”