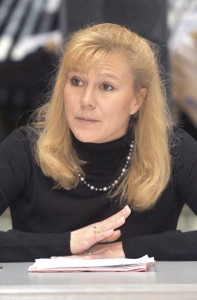 SOUTHWICK – Conflicts of interest have been a continuous topic of discussion for the Board of Selectmen since the election of Tracy Cesan last spring.
Cesan has hired Attorney Timothy Ryan, of Springfield, to protect her interests while the board discusses how to handle conflicts with town counsel and an outside attorney.
Last spring, Chief Administrative Officer Karl Stinehart was given permission from the previous board to hire Attorney Demetrios Moschos of Worcester to determine what the conflicts of interest are, because of Cesan’s employment with the town.
“I thought he was supposed to help Karl and me with day-to-day business, with him being my boss during the day, and my being the boss a night,” said Cesan.
Cesan said she retained Ryan when she believed Moschos’ role would be more than just a helper.
“I oppose Attorney Moschos,” she said. “I feel this is unnecessary. Ken Albano is our Town Counsel.”
Board Chairman Arthur Pinell said, because Cesan is both a town employee and elected official, it could be an issue to use Albano on cases of conflict of interest.
“The fact that Tracy Cesan has a dual role creates a problem for Ken Albano,” said Pinell. “So we hired an outside attorney to answer questions for Karl.”
Pinell said Moschos was selected because of his background and expertise.
“He has a lot of experience with municipal issues,” Pinell said.
Cesan is an employee of the fire department who defeated incumbent Fred Arnold. Even before her election, Cesan obtained an opinion from the state ethics commission that she could legally continue to hold her position and be a member of the board. Albano was also consulted and it was his opinion that Cesan should not vote on matters pertaining to the fire department. Cesan reported that the ethics commission said it is up to her discretion whether or not she should vote on other matters.
Attorney Ryan said Moschos is an attorney at Mirick O’Connell, “a large, expensive Worcester firm.”
“The town legal counsel was more than able to do this,” Ryan said. “They are spending money on lawyers – taxpayer money.”
According to Certified Governmental Town Accountant for Southwick, Linda D. Carr, the budget for attorney fees for fiscal year 2013 is $71,732.
Pinell and board member Russell Fox have challenged Cesan several times on what they perceive as conflicts. Last month, Pinell asked Cesan to obtain an opinion from Albano on whether or not she should vote on issues pertaining to the employee handbook and bargaining. When Cesan said she would be “more comfortable” receiving an opinion from an attorney of her choosing, Pinell and Fox both denied her formal request.
Cesan then requested that Ryan participate in discussions scheduled for next week with Moschos. She said Monday night that Pinell is not allowing it.
“If this was above board, I’d think my attorney would be allowed to participate and Mr. Pinell is not allowing it,” said Cesan.
Pinell responded to Cesan by stating “transparency is a wonderful thing” and said the intent of the Oct. 22 meeting with Moschos and Albano is to “clarify what the board can do to conduct business without distraction.”
Pinell said yesterday that it is the chairman’s discretion to allow additional counsel to participate, and he would not allow it.
“That’s my position at this time,” he said.
Pinell said there have been numerous conflicts over the past several months.
“It’s been a bit of a challenge,” he said.
Ryan maintains that Cesan’s ability to do her job on the board is impaired by the other members.
“They seek to minimize her role by saying she can’t be involved,” said Ryan
The Oct. 22 meeting is set for 6:15 p.m. at Town Hall and is a public meeting.
A call to Attorney Moschos was not returned by press time.