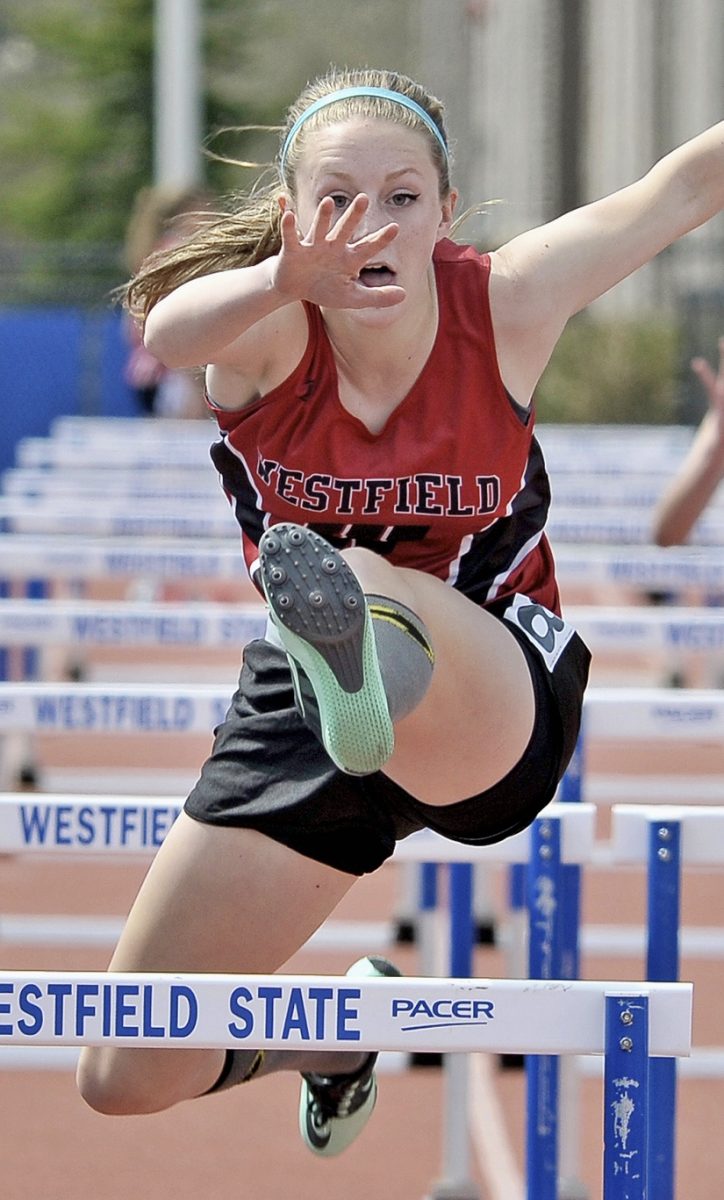 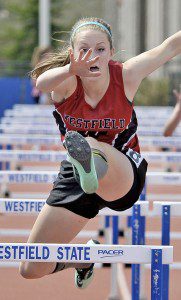 WESTFIELD – Championship weekend is upon us and that has a handful of local athletes thinking about gold medals.
One front runner who will be front and center at Friday night’s Pioneer Valley Interscholastic Athletic Conference indoor track and field championships is junior Morgan Sanders.
Sanders, the defending champion in 55-meter hurdles, is currently unbeaten in the event this season. She will look to repeat again at Smith College in Northampton, beginning at 6 p.m.
“(Morgan) should be effective,” Westfield High School girls’ indoor track and field coach Linda Rowbotham said. “Bottom line is – she’s quick and good at hurdles.”
Sanders will also compete in the 55-meter dash, and long jump.
At Springfield College, the diving portion of the PVIAC competition will take place Friday night with Westfield divers James Wagner and Clarisse Jones attempting to get the Bombers off on the right foot.
While the boys’ swim team is rather small and is not expected to challenge for the team title, the Westfield girls’ swim team is seeking a third place finish or better on Saturday.
“It’s going to be a dogfight,” Westfield head swim coach Tom Lewis said of the girls’ competition which is slated to begin at 6:30 p.m. “A lot of it depends on which secondary kids move up in the rankings, and what top performers don’t swim and move down in the rankings.”
Two of Westfield’s top female swimmers are senior Lauren Longley and junior Kelsey Johnstone.
“(Lauren) is small, petite, and soft-spoken, but she is a dynamo in the water,” said Rowbotham, who also serves as assistant swim and head diving coach. “(Lauren) works hard – a lot of it she has – and she’s just fast … I don’t know why she’s often overlooked.”
It will be hard to overlook either athlete when Longley participates in the 100 butterfly and 200 freestyle and Johnstone competes in the 200 individual medley and 100 breaststroke.
Other Westfield female swimmers such as Rachel Charette, Samantha Dolan, Hannah Ditto, and Sara Russell will also be critical to the team’s success.
It is widely believed that Longmeadow and Northampton will take the top two overall team spots. Westfield, Minnechaug, Monument Mountain, and Belchertown are expected to challenge for the bronze, unless an upset produces a silver or gold.
“No one would’ve looked at our roster and figured us to go top three,” coach Lewis said. “Now here we are knocking at the door.”
Westfield posted an impressive 8-2 record this season, and nearly knocked off Northampton.
“The girls have done a nice job stepping up this year,” Lewis said.
As for the boys, coaches say look for Nick Rosso to make some noise in the 200 individual medley and 100 butterfly.