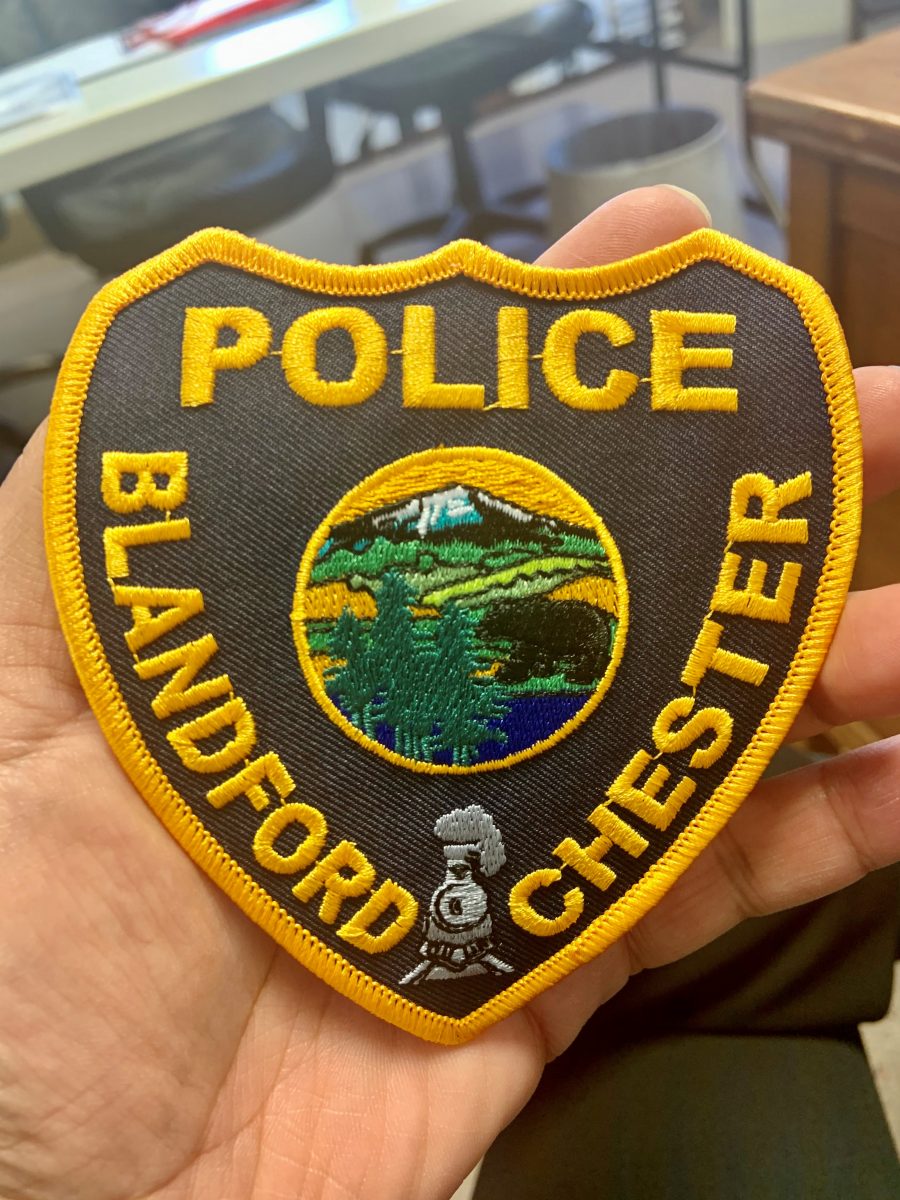 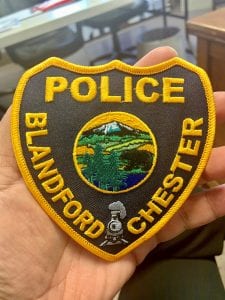 The newly designed patch for the Blandford -Chester shared police partnership. The artwork starts with the Arrowhead shape; a symbol of respect for those who initially inhabited the region and showed ingenuity by adapting to the needs of the times. The center circle shows aspects of the area and the commitment to maintaining its integrity. (Photo submitted)

CHESTER – For the past two years the towns of Chester and Blandford have been working cooperatively on creating a shared police force.

This effort was a collaboration with the boards of Selectmen and town administrators, the Pioneer Valley Planning Commission and Police Chief Daniel Ilnicky, who was sworn in as chief in Blandford in September of 2018 and has served as chief in Chester for over 10 years.
Ilnicky was hired following the walk-off of the former interim police chief and part-time officers.
During six months of meetings, the towns reorganized the administration of their policing efforts, upgraded their capital needs, and drafted an inter-municipal agreement (IMA) which is ready to be implemented in January of 2020.
In 2018, the towns were aided by a $15,000 grant from the Pioneer Valley Planning Commission’s Division of Local Technical Assistance for a joint study to explore a combined police force between the two towns, said Blandford Town Administrator Joshua Garcia.
Services of the Novak Consulting Group were retained to perform the study and were tasked with reviewing the operations of both police departments to assess potential benefits or obstacles associated with sharing of personnel, facilities, or equipment.
The report  resulted in several recommendations which Blandford and Chester, through the boards of Selectmen, have committed to pursue, Garcia said. Throughout the study, they found the towns were uniquely positioned to succeed in some sort of shared service policing arrangement for the following reasons:
Both towns have part-time police departments that work limited schedules, generally providing less than 25 hours of patrol per week, with coverage provided during other hours by the Massachusetts State Police, a situation that allows for considerable flexibility in structuring a combined department. 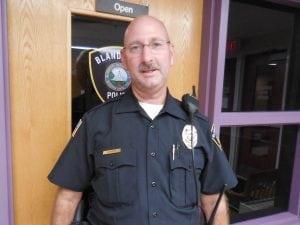 Chester Police Chief Daniel Ilnicky was sworn in as Blandford Police Chief in September, 2018, and has been serving both towns. (Photo by Amy Porter)

Both towns employ the same part-time chief of police, who is familiar with the characteristics of each town, and Blandford’s Police Department had no other employees at the time of the study, leaving it in a position to rebuild from the ground up.
Chester officers have also been periodically patrolling Blandford in the absence of regularly scheduled Blandford patrols, and have begun to develop mutual familiarity with the town and its residents.
“When we went through the feasibility study, both towns had public meetings. In Blandford, it went very well. A number of residents came and were supportive,” Garcia said. He said following the public meetings, the boards of Selectmen voted for the plan.

The IMA was then drafted with the assistance of the PVPC and a state Community Compact grant for implementation of $43,400. The grant paid for the new costs associated with the first year start-up of the shared service arrangement, including purchase of dual band portable radios, digital vehicle repeater systems, standardization of uniforms and patches, re-marking of cruisers, and legal and consultant costs.
Other operational costs not dependent on the grant include salaries for police chief and officers including salary adjustments, membership dues/fees, annual service fees, and expenses for vehicle maintenance and/or replacement, supplies, and other administrative needs.
In the IMA, Chester will serve as the host municipality, and the towns will share evenly the costs of operation. Garcia said the new FY2021 budgets will reflect the shared policing services partnership.
“What’s really consolidated is the administration,” Garcia said. There will be one police chief overseeing the two towns, and one or two part-time officers in each town, with the other town providing backup, if needed.
Garcia said there will be more police coverage at any given time with the new arrangement. “Still, with this arrangement, we won’t have 24/7 coverage,” he said, adding that even servicing both towns, the police chief’s position is part-time.
“What I’m excited about in this arrangement, is that when turnover occurs; (it will be) attractive to a skilled and qualified person to fill that job,” Garcia added, saying in the past the town has had difficulty in hiring a police chief for 10 to 15 hours a week, which was all they could afford.
“It’s what the hilltowns need to start thinking about, shared services,” said Chester Town Administrator Katherine Warden. “This is a win-win for both communities.  We have more policing services, and an excellent police force.”
Warden said they’ve already been working together for a year, it’s been going very well, and the community has been very supportive. “Now that it’s all finalized, I have all faith that it’s going to continue to go well,” she said.
The towns are having a kick-off event of the shared partnership on Dec. 10 at 4 p.m. at the Chester Highway Garage located at 2 Town Road, in Chester, weather permitting. If it rains or snows, they will meet at the Chester Town Hall instead. Warden and Garcia said the public is invited to attend.
“At this event, we will recognize this important and unique regional effort and the support it has received from the Commonwealth of Massachusetts Department of Local Services, through the District Local Technical Assistance and Community Compact Cabinet Programs,” said Garcia.