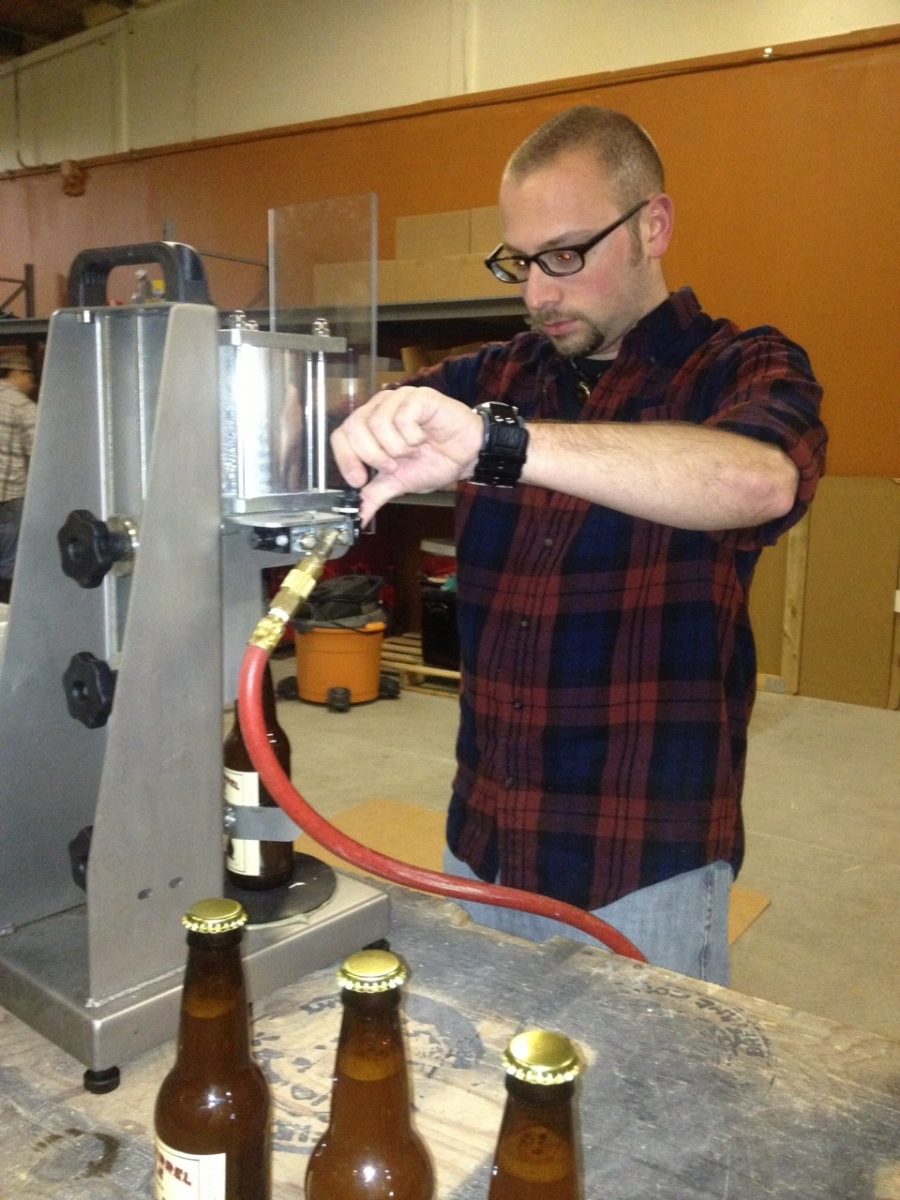 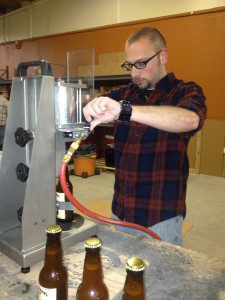 Stan Costa, of Southwick, bottles beer at the Westfield River Brewing Company ahead of the Chili and Beer Fest set for March 9 at Shaker Country Club. Proceeds will benefit the Westfield Fire Department. (Photo by Hope E. Tremblay)

WESTFIELD – With budgets tightening everywhere from homes to municipal departments, finding funds for “extras” is almost impossible.
To assist the Westfield Fire Department (WFD) in purchasing equipment, the Westfield River Brewing Company (WRBC) is hosting a Chili and Beer Tasting Saturday at Shaker Farms Country Club.
WRBC Managing Member Sergio Bonavita said the WFD is near and dear to his heart because his father is a fire commissioner.
“My dad said the department was looking for a way to raise money for a special nozzle and we were looking to do some kind of event, so it was a great collaboration,” said Bonavita.
Firefighter Randy Quarles said the funds will be used to purchase a Blitz Attack Nozzle.
“This is a ground nozzle that can be set to continuously spray,” Quarles said. “It is helpful when fighting a fire and there is concern that it could spread to a neighboring structure.”
Quarles said the nozzle costs a few thousand dollars, and it is not in the budget.
“Sergio approached us to do this event and I’m happy to have the support,” he said.
Quarles said attendees can expect the delicious chili the WFD is known for.
“It’s a classic firehouse chili,” he said.
Firefighters are volunteering their off-duty time to cook the chili and WRBC will have six different beers to sample, including two special spring beers and one new addition to the brewery’s regular offerings.
“We’ll have the Springtime Cezan – which is brewed with peaches – a Banana Bread beer, and we’ll unveil our newest beer, Charlie in the Rye,” said Bonavita.
Charlie in the Rye is a rye IPA, brewed with honey, rye, and caramel malts that combine the spice of a rye with the sweet malt notes of honey.  Heaping amounts of Falconer’s Flight hops are added during the boil and then dry hopped to create a citrusy IPA. The inspiration for the name is Bonavita’s pug Charlie, who even reluctantly posed for the label.
The WFD fundraiser is the first WRBC event, which Bonavita said he hopes becomes an annual fundraiser for the department.
“We want to continue to fundraise for them in future years,” he said. “This is a way to do something for them since so many firefighter have supported us from the very beginning.”
The Westfield River Brewing Company Chili and Beer Fest takes place from 12-4 p.m. March 9 at Shaker Country Club. Tickets are $20 per person in advance and $25 at the door. The event will feature live music from Bungalow Bob and Bexhell.
Advance tickets are available at WRBC at 79 Mainline Drive in Westfield.