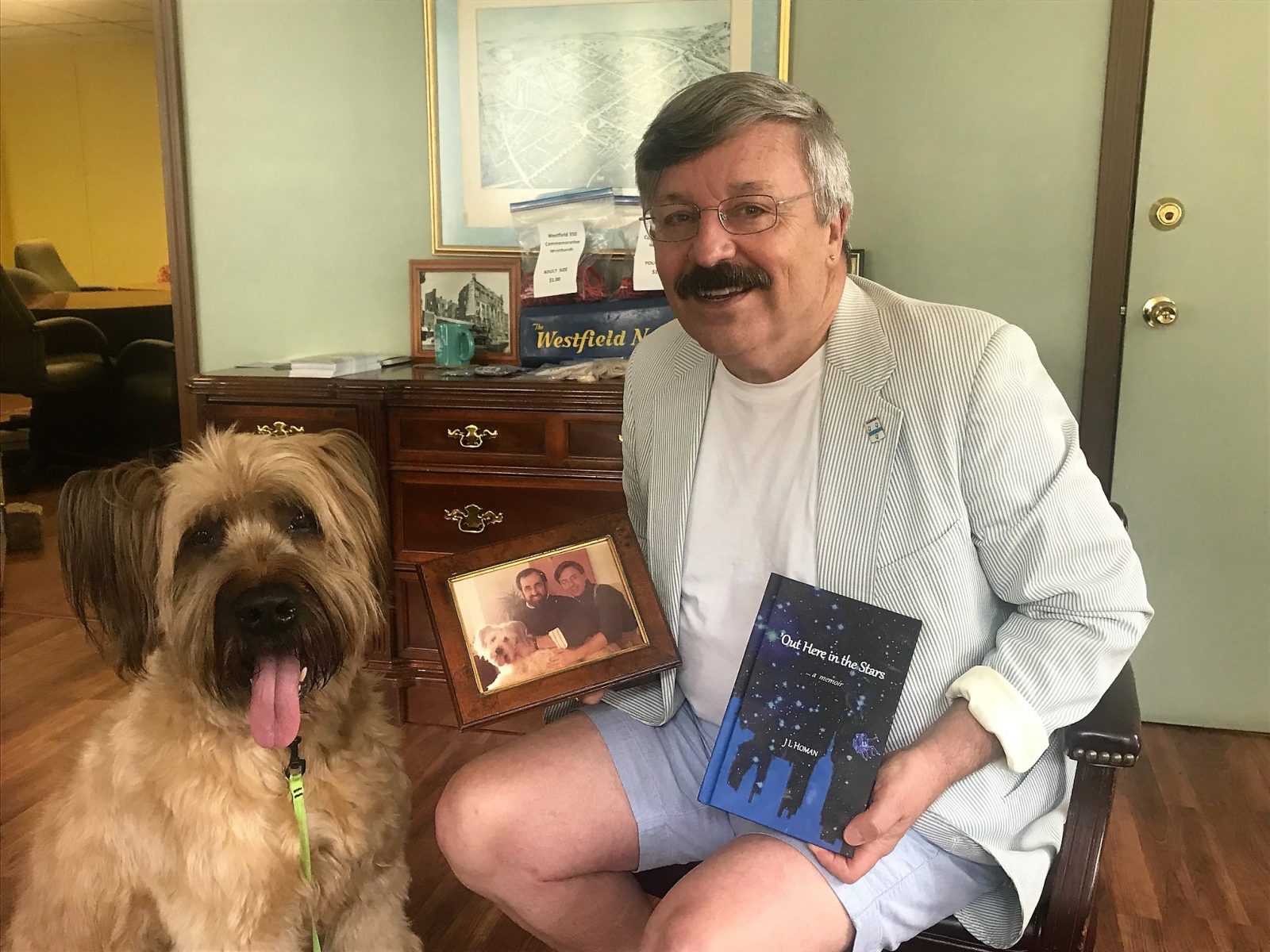 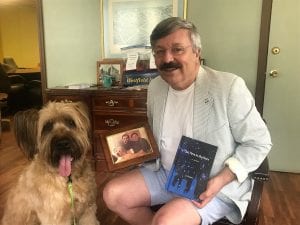 James Homan of Westfield holds a copy of his new book and a photograph of his former partner as his beloved dog Frankie poses. (Photo by Hope E. Tremblay)

The Westfield resident recently published his first book, “Out Here in the Stars,” which takes readers through the journey of his life and possibly his most important role, caregiver to his dying partner, Harold.

Homan will discuss his book tonight at the Westfield Athenaeum at 6:30 p.m. in the Jasper Rand Art Gallery. He will have copies available for sale.

Homan’s memoir chronicles the 14 months he spent caring for Harold following the discovery of his Glioblastoma multiforme brain tumor. The couple was living in Manhattan at the time and had beaten many of the odds facing gay men in the 80’s and 90’s — they had a 16-year, HIV-negative, monogamous relationship and survived the AIDS pandemic – a feat Homan touches on in his book. He noted that he eventually stopped counting the number of friends and acquaintances he lost to AIDS at 69 in 1990.

Homan writes about loss and feeling lost throughout much of his life, beginning with his abusive upbringing in Wisconsin and trying to find himself as a young gay man in the world of theater.

To celebrate Harold’s life, Homan took a journey to his former partner’s favorite city – Siena, Italy – the year after Harold died. Homan brought nearly 100 pages of notes he had taken throughout Harold’s illness and attended a week-long memoir writing workshop. It was there, in May of 2000, that Homan began writing this book and met Robert Plasse, the man who would encourage him to write about Harold and, 19 years later, remains his partner and spouse today.

“I brought, like, 84 pages of handwritten notes and eight steno pads,” recalled Homan. “I’d tried writing about Harold’s last 14 months before, but I couldn’t; it always ended in tears.”

Twenty years later, Homan feels this journey is complete, and he feels less lost these days. Or at least, lost in a different direction.

“I have come to the conclusion that we are all actually meant to be ‘lost’ to some extent during our lives,” Homan wrote in a letter to Harold in 2019. “Some of us find ourselves completely lost and our journeys become our meaning. Irving Berlin’s lyric ‘I got lost . . . but look what I found’ continues to strike a poignant chord.”

Homan, now in his 70s, said his latest journey is dealing daily with “the existential angst and irony that comes with growing older and learning to let go.”

Completing “Out Here in the Stars” was a labor of love, a learning experience and yet another twist and turn in Homan’s life.

“I contacted over 100 agents online,” Homan said of peddling his manuscript. “I got encouraging responses, but they didn’t want a 72-year-old starting a new career.”

Homan was more determined than ever and self-published the book, which is sold through Barnes & Noble.

Although daunting at the time, the publishing experience, like most of Homan’s life experiences, has not kept him from continuing on to his next chapter and he said he will have a series of short stories published soon.

“Those are about the resilience needed as we grow older,” he said, which is something he learned while he was lost.