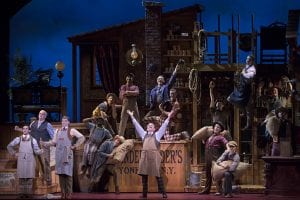 Hello, Dolly! returned to Hartford this week, some 24 years after the original Dolly, Carol Channing, came to town, to recreate her iconic performance at age 75, a feat unto itself. This triumphant recreation of the Broadway revival, created for Bette Midler, and winner of four Tony Awards, is bright and brassy, and two and a half hours of musical comedy heaven.

Legendary Broadway producer David Merrick brought significant talent to the stage to create Hello, Dolly!, based on Thornton Wilder’s hit play, The Matchmaker, which had been adapted from his previous play, The Merchant of Yonkers. Michael Stewart wrote the book. Jerry Herman wrote the score, whose title song is world renowned as one of the ultimate showstoppers. Gower Champion choreographed and directed the musical. According to Broadway folklore, Merrick wanted Ethel Merman to play Dolly. She declined. Then, he asked Mary Martin. She declined. The role went to Carol Channing, already a star from Gentlemen Prefer Blondes. Channing made it an iconic role, played it thousans of times in her career. Merman and Martin later replaced Channing, along with many stars…Betty Grable, Pearl Bailey, Phyllis Dillera and of course Barbra Strreisand in the movie.

Jerry Zaks staged this Hello, Dolly! and Warren Carlyle choreographed. Both are faithful to Gower Champion’s original, and the production sparkles and dazzles on every level because of Santo Loquasto’s colorful sets and costumes and Natasha Katz’s lighting. With the aid of technology and design, this Dolly is a feast for the eyes and the ears. There are three showstopers “Dancing”, “The Waiters’ Gallop” and the title number. The ensemble make Carlyle’s balletic dances look effortless.

Carolee Carmello is a superb Dolly Gallagher Levi.. She gives the role her own spin, and she doesn’t channel Channing or Midler  She’s a solid singer, capable dancer, and deft comic. John Bolton is a lovable Vandergelder. All of the characters were well-performed.

I’m a Hello, Dolly! veteran, and this production exceeded my expectations.

I have a personal bias towards Hello, Dolly!. The 1977 Houston Grand Opera revival with Carol Channing offered me my first professional theatre experience. When Channing and Dolly returned to Hartford in 1995, it offered me a chance to go backstage afterwards for a reunion with Miss Channinng, who, although possibly prompted, remembered me, a total thrill for someone who’s not generally starstruck. In my mind, “Dolly will never go away again”.

Hello, Dolly! plays The Bushnell through Nov. 17. There are still tickets available for remaining performances. For details: www.bushnell.org.

Mark G. Auerbach studied theatre at American University and the Yale School of Drama. He’s worked for arts organizations and reported on theatre for newspapers and radio. Mark produces and hosts ArtsBeat Radio on 89.5fm/WSKB Radio, WCPC on Comcast 15, and Pioneer Valley Radio