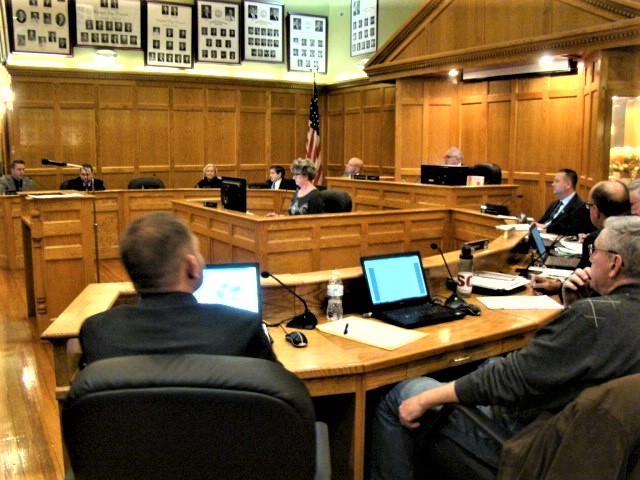 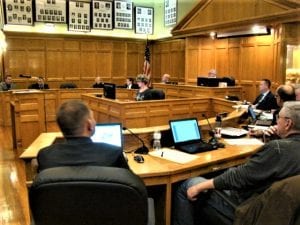 The City Council’s final meeting of 2019 is scheduled for Dec. 19. (Photo by Amy Porter)

WESTFIELD – The City Council meeting, run by President Pro Tem John J. Beltrandi, III, did justice to its short agenda on Dec. 5, moving along items that needed closure, and referring others to committee.
Before business began, Council on Aging Executive Director Tina Gorman invited all the councilors to attend holiday events at the Senior Center, and especially to visit and take a look at three “spectacular” Christmas trees created by two seniors honoring the Westfield Fire Department, Westfield Police Department and Veterans.
Resident Robert Pearson thanked Acting Mayor and Ward 2 Councilor Ralph J. Figy for helping to get signs up on Lindbergh Boulevard reducing the speed limit.
Matthew Roman of the “senior snoopers” said they were happy the first snow storm had passed. He said some streets, such as North Road, were a little messy, but overall the Highway Department did a good job. “They need a little more practice,” Roman said, before wishing the councilors a Merry Christmas.
During the business portion, the council voted unanimously to authorize the Acting Mayor to enter into a Feasibility Study Agreement with the Massachusetts School Building Authority (MSBA) regarding the Franklin Avenue Elementary School Project. Figy said the MSBA is expected to vote on going forward with the study Dec. 11.
An appropriation of $300,000 from the Community Preservation Act undesignated account for the Cross Street Playground was referred to the Finance sub-committee. 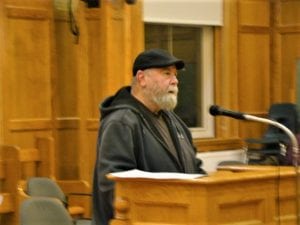 At a public hearing on a license for Michael Patton of Patton Firearms, 24 Old Holyoke Road, Patton said he was looking to generating income by selling new and used firearms on the internet and at gun shows. He said he would not be conducting business at his residence. The public hearing was closed after few comments from councilors and none from residents, and the license was referred to the License Commission.
The Zoning, Planning and Development sub-committee reported on several items that had been discussed at its meeting on Dec. 4.

The zone change petition for 62 School St. from Business A to Commercial Office Retail Enterprise (CORE) district on a petition submitted by Rob Levesque on behalf of WNG Holdings and Patrick Berry, received a positive recommendation from ZPD. After no further discussion, the City Council roll call vote was unanimous in its first reading, with a second reading and final passage set for the meeting on Dec. 17.
There was more discussion on the Planning Board’s amendment to require a special permit if a marijuana establishment is within 500 feet of a park. ZPD voted 2-1 not to make a recommendation to the council, and to refer it or to have the council refer it to the Legislative & Ordinance committee.
L&O Chair William Onyski said that the matter is up to the council, if there was no recommendation from ZPD. “We’re looking for the input,” he said.
“The work’s been done by the Planning Board. Some of us were concerned if we started to add, then change the zoning, it might make it more difficult,” said ZPD member Andrew K. Surprise.
ZPD chair Nicholas J. Morganelli, Jr. said that the Planning Board voted unanimously to add parks to schools, churches, etc. in triggering a special permit. “We didn’t have a positive or negative recommendation,” he said.
ZPD member Matthew Emmershy also spoke up about his concerns, saying that all marijuana businesses besides retail are lumped into the cultivation category. He also said the Rail Trail is considered a linear park, which poses further restrictions.
Bean said with no recommendation from the committee, it needs to be written up as an ordinance.
Morganelli said it was written up adding parks by the Planning Board. “It’s pretty simple. If we take a vote to refer it to L&O we’ll do just that; if not, it just dies.”
After further discussion about what defines a park, and which establishments, retail or cultivation that should be included; it was referred back to ZPD for another look and a recommendation.
Ward 1 Councilor Mary Ann Babinski, who chairs the Public Health & Safety committee, said that she had received a response from Airport Manager Eric Billowitz regarding an inquiry made by Morganelli on the current fire extinguishing product used by Barnes Airport, and whether the Federal Aviation Administration requires discharge of Aqueous Fire-Fighting Foam (AFFF) at Barnes for live testing. AFFF has been identified as the source of PFAS contamination in Westfield water.
Babinski said the airport manager noted that the FAA did not require any discharge as part of the training process. Billowitz also said the Air National Guard told him they did not use AFFF for drills, and had not had fire drill practice in the past 20 years. Babinski said she put the accompanying documents on the shared council drive.
Morganelli thanked the councilor across the way for getting the information.
A motion by At-large Councilor Dan Allie requesting that Department of Public Works Director David Billips present updates on Wells 7, 8 and 2 at the next regularly scheduled council meeting, was moved to the meeting on Jan. 16.
Figy said Billips had requested a list of questions before he addresses the council, which was his reason for pushing the reporting date. He also requested that questions for Billips go through the Mayor’s office. Figy also noted that the information had been given in a report to the Water Commission.
Babinski said Billips prefers to be the one to give reports to the council, to ensure their accuracy. She also agreed that a list of questions would be helpful.