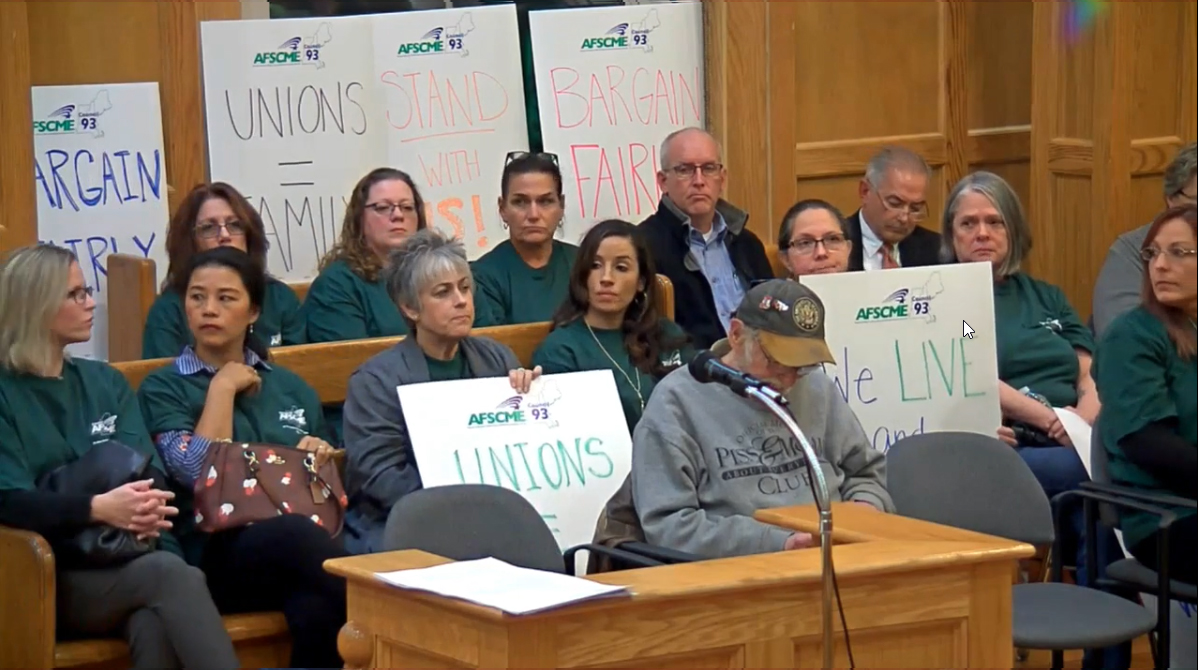 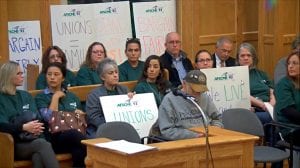 WESTFIELD – Seven signed and ratified city employee contracts passed the first reading at the City Council meeting Nov. 7, after two months of debate and two trips to the Finance sub-committee.

The debate continued at the meeting, as union clerical workers watched silently, holding signs which read, “Unions equal families,” and “I live and vote in Westfield.”

The contracts covered Westfield Crossing Guards, International Association of Firefighters, Professional Municipal Employees Association, AFSCME Local 1676 (Foreman Unit) for the Building Dept., AFSCME for the Auditor, Westfield Police Officer Coalition, and the Westfield Fire Department Supervisors Association, and were retroactive to July 1, 2019.
Finance sub-committee chair Brent B. Bean II brought each one forward with a 3-0 recommendation, noting that the amounts requiring transfers in the orders were included in the budget under Future Salary requests. Several of the items to be transferred were cuts made by the City Council over the summer, which required restoration according to the contracts.
At-large Councilor Dave Flaherty objected to each item, asking how much future health insurance and pension costs were represented in the contract, and how much costs would be compounded over three years.
“Employees are not taking any risks, the city is,” said Flaherty.
Ward 3 Councilor Andrew K. Surprise also objected, asking when the Memoranda of Understanding (MOU) were signed, why they did not come to the Council within 30 days, and whether any of the councilors had read the contracts.
“I did,” City Council President Ralph J. Figy interjected.
“I want employees to get raises; how are we going to pay for it. We can’t afford the raises,” Surprise said. The employees are getting one percent increases this year, and two percent the next two years.
“These are real people,” said At-large Councilor Cindy C. Harris, adding, “I support the crossing guards, fire, police.”
The first reading for the crossing guards passed on a vote of 9 to 4, with Councilors Surprise, Flaherty, Allie and Emmershy voting no.
When Bean brought forward the second item for the firefighters, Flaherty said he intended to repeat his objections. “What are the true costs,” he said.
Surprise said it is the Council’s responsibility to review them, and Emmershy said the costs snowball by the time the contracts end.
Flaherty then made a motion to table until January, which failed 8 to 5, with Councilor Nicholas J. Morganelli Jr. joining in support of tabling this motion, and several that followed.
In turn, each contract passed the first vote, over objections. Flaherty also raised the question as to whether Figy, as Acting Mayor, had the authority to sign the contracts. He then abstained from voting, until the question could be answered by the Law Department.
Following the meeting, Figy said that the contracts had already been signed and ratified. “The City Council, after thoughtful deliberation, saw fit to authorize contracts of several local unions. The taxpayers are fortunate to have such a talented and dedicated work force, providing the services that we’ve come to depend upon and enjoy,” Figy said.
The contacts are scheduled for a final reading at the next City Council meeting, after which, if passed, raises will be retroactive to July 1.