WESTFIELD-Nelson Gabriel “Gabe” Santos-Ferrer relishes his volunteer role as a mentor to youngsters weekdays at the Boys and Girls Club of Greater Westfield – a “special place” where he too has grown up. 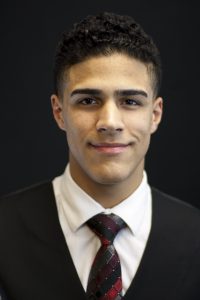 Nelson Gabriel Santos-Ferrer, a junior at Westfield High School, has been named Massachusetts Youth of the Year by Boys & Girls Clubs of America.

Now at 17 and a junior at Westfield High School, Santos-Ferrer was named Massachusetts Youth of the Year by Boys & Girls Clubs of America (BGCA) on Monday night in recognition of his leadership, service, academic excellence and dedication to live a healthy lifestyle. He was selected among 36 young people from across the state and will serve as an ambassador for all teens in the state.
When Santos-Ferrer heard his name called as the winner, he said he was “happy, excited and grateful” for the once-in-a-lifetime opportunity.
“I know the Westfield club has made a difference in my life and I look forward to sharing my story with others,” he said during an interview Thursday afternoon at the West Silver Street club. “I am excited to represent our city and am honored and truly blessed to showcase our club.”
Santos-Ferrer also credits his mother, Myrna Ferrer, for his determination to succeed.
“Coming from a low socio-economic status I didn’t think this could happen for me,” he said, adding he was shy in his youth and the Westfield club faculty members and his peers helped him in that respect.
“I now get to mentor the younger kids and I know how important that can be since I needed male mentors growing up,” he said, adding he also thanks state Rep. John Velis who mentored him and his brother in the PAL (Police Athletic League) mentoring program when they were pre-teens. 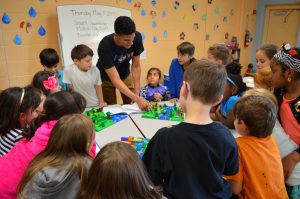 Nelson Gabriel “Gabe” Santos-Ferrer serves as a mentor to youngsters at the Boys and Girls Club of Greater Westfield. He has been named Massachusetts Youth of the Year by Boys & Girls Clubs of America.

Kellie Brown, director of operations at the Westfield club, noted that the Youth of the Year title is a prestigious honor.
“Gabe has been a club member since 2006 when he and his twin brother started coming to the club,” said Brown. “He has taken advantage of numerous programs here and is the epitome of what Boys & Girls Clubs do. His story is a true inspiration to youth all across America.”
Santos-Ferrer has been active over the years in the Torch Club, the Keystone Elite Club, the traveling basketball league program, the Immersion Program and in the Fine Arts Department. Currently, he is a mentor at the Westfield club with second graders on math and science projects.
“In the future I will also continue mentoring here and being involved because it is important to give credit to the Boys & Girls Club,” said Santos-Ferrer. 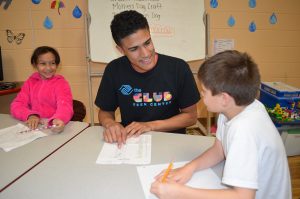 Now in its 70th year, the Youth of the Year program honors the nation’s most “awe-inspiring” young people on their path to great futures and encourages all kids to lead, succeed and inspire, according to Jim Clark, president and CEO, BGCA, in a statement.
“Gabe and all Youth of the Year nominees are living proof that Boys & Girls Clubs across the country are inspiring and enabling young people to achieve great futures,” said Clark. “Being named Youth of the Year is a lifelong honor. As the Massachusetts Youth of the Year, Gabe will serve as a spokesperson for our young people, sharing his inspiring story and leading the way to transform communities for the better.”
As the state Youth of the Year, Santos-Ferrer will receive a $1,000 college scholarship from the 99 Restaurants, a $5,000 college scholarship from BGCA, and a $20,000 college scholarship from the Kraft family in memory of Myrna Kraft, the late wife of NFL Patriot owner Robert Kraft. In addition, he received a $500 scholarship from the Boys and Girls Club of Greater Westfield, and a Dell laptop from Comcast along with three months of free Internet access.
This summer, Santos-Ferrer will join other state winners to vie for the Northeast regional title. If named the regional winner, he will be awarded an additional $10,000 college scholarship, renewable for four years up to $40,000. Six youth, including five regional winners and a military youth winner, will advance to Washington, D.C. in September, to compete for the title of Boys & Girls Clubs of America’s National Youth of the Year. The national winner will receive an additional scholarship of $25,000, renewable for four years up to $100,000, and will have the opportunity to meet with President Donald J. Trump in the White House.
With one more year of high school to go, Santos-Ferrer is already focused on his future – majoring in pre-med and biology and specializing in orthopedic surgery. His top choices for schools include Harvard University, Boston College, or the University of Massachusetts at Amherst.
In preparation for his future studies, he is also attending The Global Youth Summit on the Future of Medicine at Brandeis University June 25-July 1. A scholarship will cover his expenses for the six-day event.
When he isn’t studying, Santos-Ferrer is active on the Westfield High Student Council (representing the Class of 2018) and the Key Club. He also is a member of the varsity basketball and varsity volleyball teams. Additionally, he has been a member of the city’s Youth Commission since 2013 which makes recommendations on grant monies received. One of the commission’s recent recommendations was installing a spray park at the Sadie Knox Playground.
The BGCA recognition program is presented by Disney, which has supported the youth advocacy organization for more than 50 years, empowering young people to reach their full potential and providing youth with access to the tools they need to build the futures they imagine. Toyota, the Signature Sponsor of Youth of the Year, is dedicated to inspiring the next generation of engineers, thinkers and leaders who will help drive the American economy. Additional support is provided by the University of Phoenix, a partner that has worked with BGCA on academic success initiatives, and the Taco Bell Foundation, for its commitment to teen empowerment.