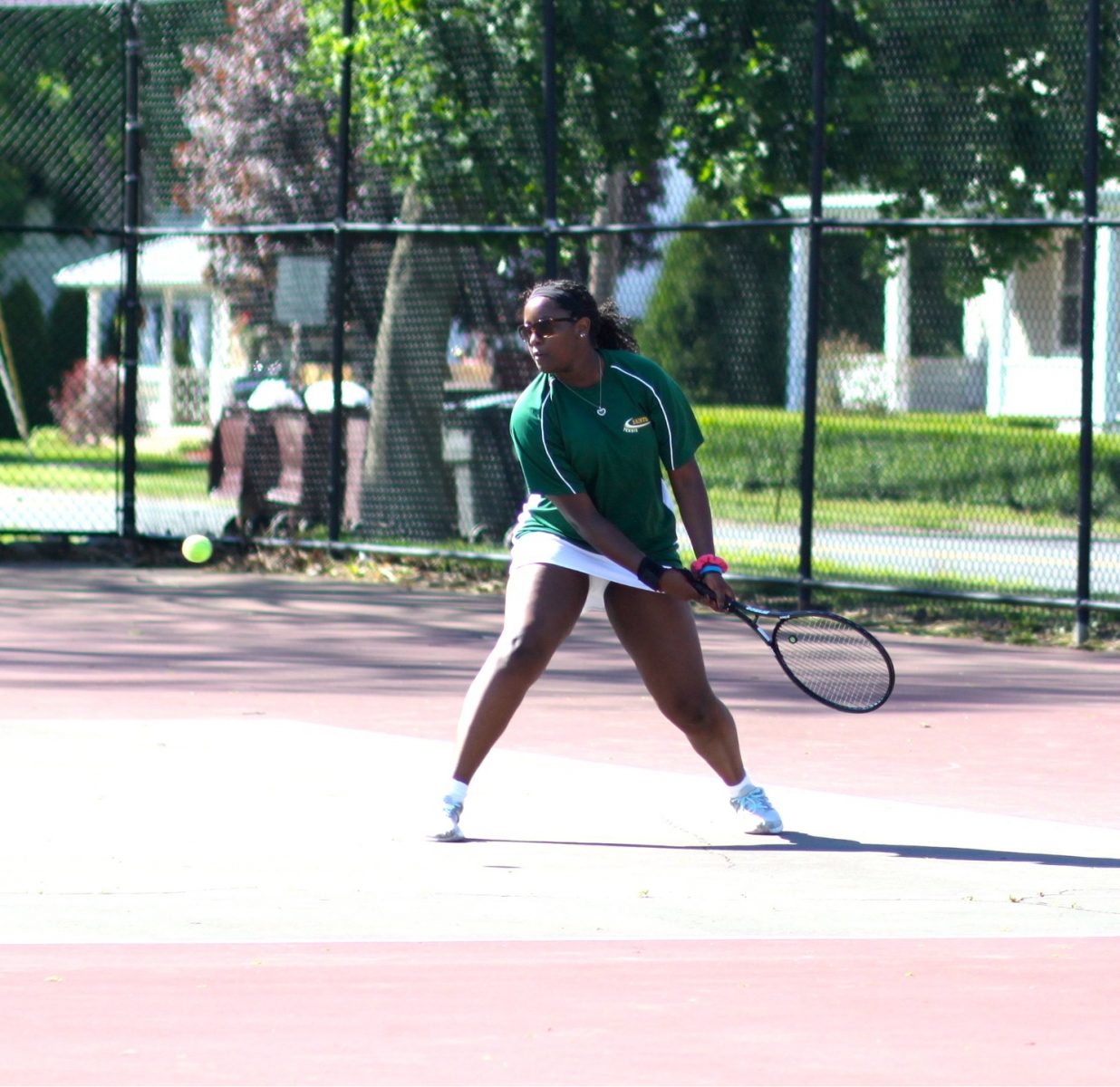 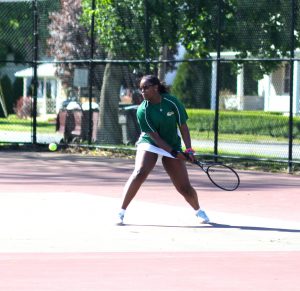 WESTFIELD – The Saint Mary High School girls’ tennis team is slowly brewing a winner.
St. Mary took Thursday’s match down to the wire with Renaissance before narrowly losing, 3-2, as Saint’s Ashley Forest played a seven-point tiebreaker to split sets with Renaissance’s Brianna Henry. The two players played a 10-point tiebreaker to determine the winner of the match with Henry prevailing, 3-6, 8-6, (10-4).
Jessica Demers won in her second match back from injury, defeating Renaissance’s Nicol Schabot, 6-2, 6-2. Demers kept her opponent pinned to the baseline throughout most of the match with precision lobs and long forehand shots.
St. Mary’s Jessica Crosby won in straight sets over Renaissance’s Sarah Cannomela, 6-0, 6-0. Crosby kept her opponent on the run with blistering cross-court backhands, and sharp crisp forehands. 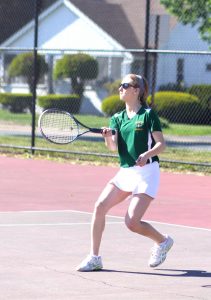 Jessica Demers competes for the Saints Thursday against Renaissance, of Springfield. (Submitted photo)

For Crosby, it was her seventh straight win of the season.
On Wednesday, Crosby rallied from a 3-6 loss to Frontier’s Morgan Farrick in the first set – only the second time she lost a set all season – to win the second set with stunningly strong crosscourt backhands and impressive net play before going on to win a decisive 10-point tiebreaker, 10-7.
The Saints lost that battle as a team, 4-1.
“We are still building and improving as we progress through the season,” St. Mary coach Frank Crosby said. “I am happy with their style of play.”
Renaissance won at first and second doubles.

BASEBALL
A victory in more ways than one
Westfield Technical Academy 2, Sci-Tech 1
Westfield Tech won on a walk-off wild pitch in the bottom of the seventh inning as Brandon DeGray scored the winning run from third base against Sci-Tech in the Alzheimer’s Awareness game at Bullens Field.
DeGray reached base with a walk to begin the seventh. Cody Garwacki beat out a bunt with help of a bobble at first base. Tanner Haley bunted the base runners over. Then the wild pitch occurred.
Andy Daniels had a hit and RBI for Westfield Tech. Tigers’ Alex Sparks and freshman Connor Medieros also had hits. For Medieros, it was his first as a varsity player.
Nick Clegg was dominant on the mound for Westfield Tech, recording 14 strikeouts for the second straight time. He allowed one hit, one walk, and one run.
“It was a good chance for us to play small ball and push across a run,” Westfield Tech coach Bob Eak said. “Our players executed perfectly.”
Westfield Tech raised more than $2,000 with its Alzheimer’s Awareness push.
Said Eak: “I’m very happy to get the win on such an important day for us.”

Sarnacki soars past Saints
Granby 24, St. Mary 3
Kate Sarnacki had a hand in 14 of her team’s 24 goals, scoring seven and assisting on seven others. Jessica Patruno finished with six goals and one assist.
Casey Rutledge, Laura Brodkin, and Anna Kosinski each scored a goal for St. Mary.