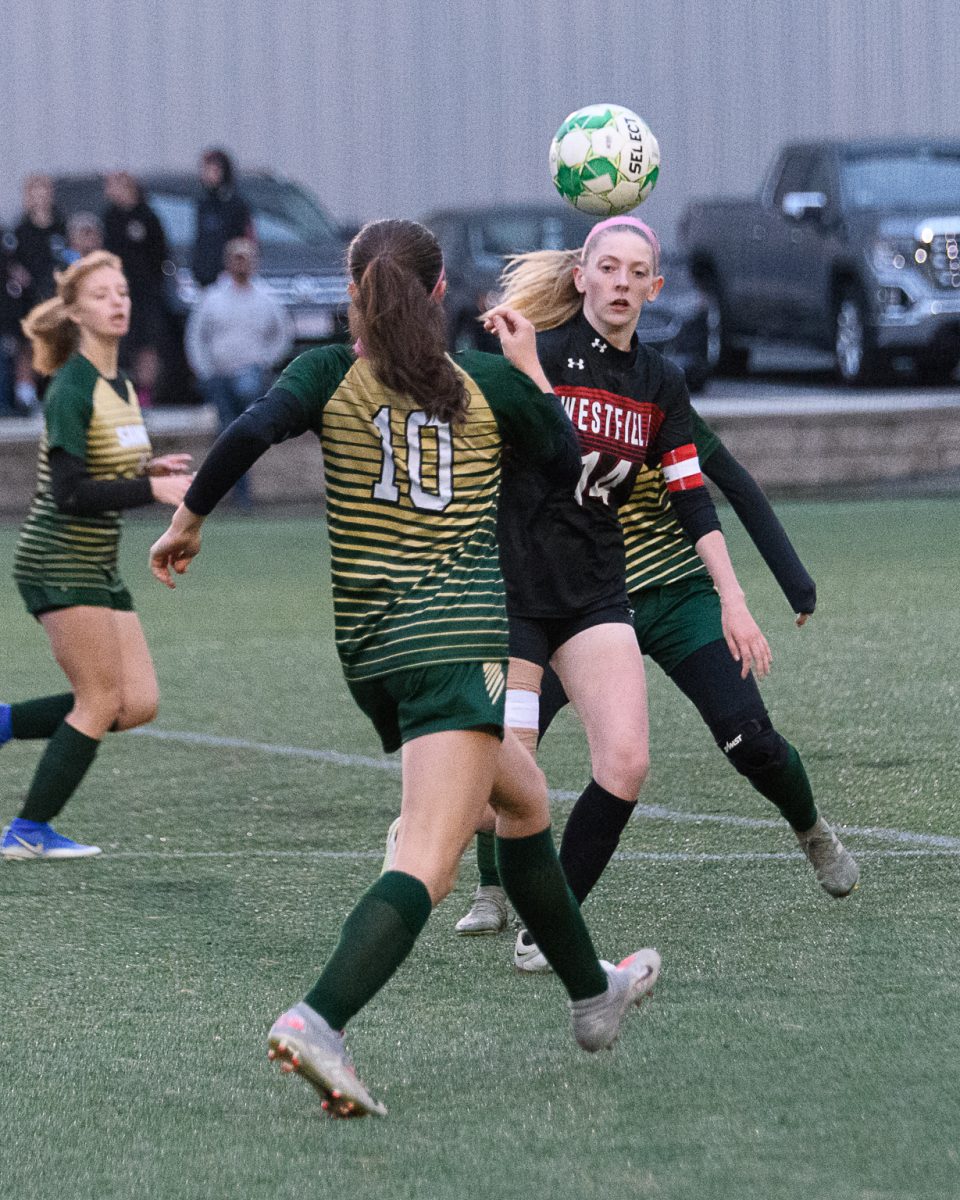 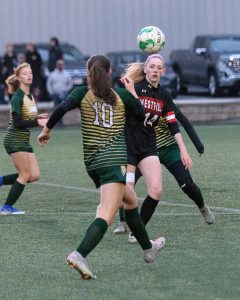 WESTFIELD – It was a rocky start to the season for the Westfield High School girls soccer team but if Westfield senior Riley Byrnes and her fellow Bombers teammates have any say about it, there will be a strong finish.
Byrnes converted two penalty kicks, one of which did not officially go in the books as a PK, and the Westfield High School girls soccer team held off St. Mary’s 3-1 Wednesday night at Roots Athletic Center.
“We had a bit of a rough season so we really just wanted to finish out as hard as we can,” Byrnes said. “We just wanted to go out and just give 100 percent every minute. …We’re just trying to get our goal differential up by as much as possible and go out on a high note so even if we don’t qualify (for states), we can end with some wins.”
The first penalty kick came in the third minute. Byrnes struck the crossbar with the ball. The ball bounced down and out of the net, deflected off a St. Mary’s defender, and back to Byrnes, who crashed the net for the follow-up goal.
The lead was short-lived though. In the 12th minute, Macy Woodger delivered a through ball to Emma Goodreau, who finished up the play with a beautiful header that tied the game 1-1.
“They definitely didn’t back down,” Byrnes said.
Ten minutes later, Westfield’s Ella Santaniello tapped a low roller past the St. Mary’s keeper, who had come out of the net to attempt to make the save. The Bombers led 2-1.
Then, in the 52nd minute, Byrnes scored on her second PK, striking the ball past the goalie for a 3-1 advantage.
“We showed tonight against a good opponent that we can play some quality soccer,” St. Mary’s girls soccer coach Patrick Olearcek said. “When we make mistakes, we get hurt.”
St. Mary’s goalie Amelia Willenborg made more than a dozen saves in the game, including several diving stops. Others like Lillian Nadler helped the Saints remain competitive throughout the gaem. Nadler made several defensive stops and was active with many throw-ins from the sideline.
“I was proud of the girls, the way they competed,” coach Olearcek said. “At first, they were timid. As the game grew and grew, (they realized) it’s the same game, the same width of the field, the same number of players on the field, and they got it. If we make a few less mistakes and play with the same kind of composure that we did for three quarters of the game after the start, I think we’ll be fine.”
St. Mary’s entered the game with a bit of a chip on its shoulder after being shut out of the Pioneer Valley Interscholastic Athletic Conference-sponsored postseason despite posting a 14-2 record.
“Are we disappointed after a 14-2 season? We did our job. To drop nine spots (in the state rankings) when you go 6-0 with six shutouts at the time, you’re dejected,” coach Olearcek said. “Playing against a tougher opponent (like Westfield), I think they can see they can build their game this way. I think being able to play together, knowing that we are prepping for the states next week, we will be fine.”

FIELD HOCKEY
Rams rally to tie Spartans
Southwick 2, East Longmeadow 2
Southwick scored one goal in each of the last two quarters to rally for a 2-2 tie on the road.
Devan Fox cut the lead in half for Southwick with a third quarter goal on a penalty stroke. Alyssa Jacob had a brilliant touch in the circle off a rocket sent from Agnetha Furst from way outside the 25 for the game-tying goal in the fourth quarter. Jacob was able to redirect the ball between the goalie’s legs as she was left unmarked in the circle.
“We worked on rebounding and getting those little redirect touches at practice so it was rewarding to see it work in a game,” Southwick field hockey coach Jenn Oakland said.
Southwick goalie Ezri Johnston finished with six saves. Katelyn Gibbings scored both East Longmeadow goals.
Said Oakland: “Now (we) await the release of the final power rankings to see who (we) will be playing in the state tournament.”

BOYS SOCCER
Bombers shut out Blue Devils
Westfield 2, Northampton 0
Cam Klee scored a goal and assisted on another to help Westfield shut out Northampton. Klee tallied his first goal of the year off a corner kick in the first half. He also sent a beautiful ball in to Nichita Solopa, who finished it to make it 2-0 with 13 minutes left in the game.
“We’re one game below .500 so we’ll wait to see if playing East Longmeadow (in the west sectional) and winning tonight is enough to put us into the top 32 in the state tournament,” Westfield boys soccer coach Andrew Joseph said.
Westfield was ranked 34th on Wednesday with the final state rankings due out Sunday.

GYMNASTICS
Red Raiders roar past Bombers
Hampshire 136.05, Westfield 133, Chicopee Comp 84.25
Hampshire’s Hailey Raffa (35.40) and Tyler Hetu (34.45) finished 1-2 in the all-around competition to help the Red Raiders get past Westfield and Chicopee Comp. Bombers’ Kaela Johnson placed third.
Johnson was second on the uneven bars (8.6) and third on the floor exercise (8.5).